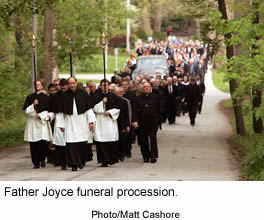 During his homily at the funeral Mass for Father Ned Joyce, Father Hesburgh told a little story that said a lot.

Hesburgh, who was then 32, spoke of meeting the young priest shortly after Joyce’s ordination in 1949. “It was less than an hour later,” recalled Hesburgh, who was executive vice president of the University at the time, “when I was leaving my office to go to Father John Cavanaugh’s office, my boss, the president, and as I got to the door it burst open, and out came this handsome and ebullient young priest. I said, ’You’ve got to be Ned Joyce,’ and he said, ‘Yes. Who are you?’ I said, ‘Ted Hesburgh,’ and I knelt down and said, ’You’d better give me that first blessing. It’s one of the best.’ And he did.”

It’s a story that speaks of faith, fraternity and humility. It speaks of friendship and spirituality and the bond between Holy Cross priests. From all that was said and sung and seen that day — from the Basilica of the Sacred Heart to the graveside service at the Holy Cross community cemetery — that image persists to this day. It became, for me, a clasp cinching together three curiously convergent events in the life of Notre Dame.

A few weeks before Joyce’s funeral Mass, the Basilica was full of family, friends and colleagues of six men—the largest group in a decade—being ordained into the Congregation of Holy Cross. Bishop Daniel Jenky, CSC, reminded them of the Good Shepherd, the Notre Dame Folk Choir sang Veni, Sancte Spiritus, and the ordinandi lay prostrate in the main aisle as the intercession of the saints was invoked in a moving litany. And soon they took their place upon the altar, joining a long line of Holy Cross priests who have given their lives to the service of God. Some days later, that same line of white-robed priests bid farewell to Ned Joyce in the cemetery where the white crosses stand in perfect rows.

Coincidental to these two solemn ceremonies, John Jenkins, CSC, was named president of the University, to succeed Monk Malloy, CSC, in 2005. Jenkins, in becoming Notre Dame’s 17th president, steps into the tracks of his Holy Cross forebears and into the shadows of giants: Sorin, O’Hara, Cavanaugh, Hesburgh. Jenkins has called the appointment an honor and a daunting task. It is also a strong reminder of the vital role the CSCs play here.

Now, as it certainly was at the beginning, Notre Dame draws its vision and its character from Holy Cross. Its best chance of sustaining its thriving Catholic heart depends upon the Congregation’s contributions. In many ways they are the keepers of the flame, the tenders of the soul, the thread running through the diverse and assorted enterprises that make up Notre Dame. They set the tone and the example. They are first and foremost priests. Their lives are testimony to that higher calling, are dedicated to that other kingdom. That is their legacy and their gift.

Just prior to these convergent events, poet Sam Hazo ’49 came here to give a reading and counsel students. He also toured the Holy Cross cemetery and wrote this:

So many gone to graves
and all in regimental order . . .
Headstoned by squat crosses
and ranked in death’s exact
chronology, they answer
to the names we had for them:
“Black Mac” McGarragher,
Leo “Rational” Ward,
“Big” and “Little” McAvoy,
Boarman the orator, and Eugene
Burke of the pinched pince-nez.
To see their lives reduced
to digits on a cross seems almost
disrespectful.

Sameness they hated
to a man, but now they’re stuck
with it.

And yet there’s something
just in this most orderly
democracy.

Each man is buried
minutes from the work that was
his life.

Together they resemble
soldiers buried by battalions
near their battlefields.

Here’s Frank the brilliant
centaur of the lot.

A trio
of cut, white tulips decorate
the plot that claimed him forty
years ago.

Who put them there?

On first reading of that final line I assumed Sam questioned the giver of the flowers. On every subsequent reading I have wondered if he is not writing about the source of that higher calling, the one who brought these men to Notre Dame. Hesburgh, Joyce, Malloy, Jenkins. The roll call continues. The tradition of leadership and service goes on.