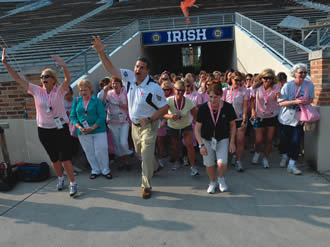 As for putting the QB right behind the center, Molnar said, “That’s so yesterday.”

The roomful of women erupted into cheers and applause.

Football 101, the kick-off event of the Kelly Cares Foundation, promised an inside view of football, a quick course in the hows and the whys and the what-the-hell-is-a-tight-end type of questions the average but not overly schooled female fan might ask. It also promised, and delivered, that those lessons would come from the coaches themselves, the names you see in the football programs, read about in the newspapers, hear mentioned on ESPN.

I learned a lot at this five-hour summer event. Like how the specialties of some upscale South Bend restaurants taste (worth breaking a diet over). What kind of speaker Coach Brian Kelly is (intense and direct). What the locker room looks like (nice, but it also offered a one-time-only chance to use the latrines there. Come on, wouldn’t you, too, like to brag: “I peed in the Notre Dame locker room”?). How it feels to stand in the middle of the famed football field (I’m not one to gush, but it was cool). And, with lessons from coaches and players, how best to kick a football or throw a pass (place your fingers just so, hold your elbow just so, bring the ball back just so . . . please, I’d do better in a drunken game of Twister).

After the meal and the on-the-field lessons, the 300 women who had ponied up $104 to attend the charitable event, whose proceeds support breast cancer initiatives, headed over to the Gug — the Guglielmino Athletic Complex — for Part II. That meant watching game footage and learning the Xs and Os of football, then visiting the Gug’s locker room, a fabulous place that players use before and after practice.

No, I still don’t know a lot more about the actual game, but I did learn some stuff that I found just as fascinating:

In every position, the team is three deep with a swing guy. That helps when, as happened in Cincinnati in 2008, Kelly’s Bearcats went through five QBs in one game.

Certain defensive players are called “Sam” and “Jack.” Umm, I don’t remember why.

“Not everybody on defense has to be smart.” Okay, those words were from defensive backs coach Chuck Martin. He redeemed himself, however, by pointing out that defensive backs “have the hardest job in sports — they have to run backwards.”

Well, not too much. The players paraded workout gear and uniforms, but did show off in other ways — one did the splits, while a few displayed dance moves, much to the crowd’s delight.

The fun and frivolity, the food and “fashion,” the football and the storied field made it a night to dine out on. I even scored a Dayne Crist-autographed pink adidas ND jersey.

As Paqui Kelly said, the event was designed to be “fun and light.” That it was. But the coach’s wife also served as a reminder of its serious purpose; she has survived two bouts of breast cancer. “I won that battle,” she said, as she thanked those whose financial contributions will aid in the continuing fight against the devastating disease.

The need for that research was apparent in a memory that also defined the evening for me.

On a whiteboard in the stadium locker room, normally used to diagram plays, one attendee left a message of infinite grief: