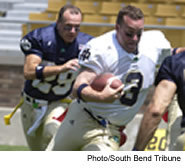 The guys in the first-ever Notre Dame Football Fantasy Camp dressed at lockers inside the stadium adorned with their names and jersey numbers. That might have been the coolest part.

That or the way the coaching staff of current Irish assistants and former stars treated them like football players, not just high-rent trespassers who paid $3,590 for the privilege to pretend.

“Give me 10 up-downs. That’s supposed to be a zone coverage,” exasperated secondary coach Trent Walters said to a repeat offender, smiling but serious about the punishment.

That or the sacrifices memorabilia collector-cum-seller Troy Horvath and former vintage Corvette owner Mike Sullivan made to attend, giving up prized possessions to raise the money for four days of memories.

“I wasn’t going (to attend the camp) because of the price. I just don’t have that sitting around. My wife’s like, ’You’re not doing that,’” Sullivan said, recalling the conversation that convinced him to hang a For Sale sign on his 1978 Silver Anniversary Corvette. “It was my toy, but I didn’t get the use out of it. This will never go away.”

That or the sight of 1954 graduate Johnny Lattner, 50 years removed from his Heisman Trophy season, laboring on gimpy legs to keep up with fans who idolize him still and regaling them with stories that never age.

“I sat at the same table as Johnny Lattner at dinner last night,” said 39-year-old subway alum Mike Sommers, who also dined with Daniel Ruettiger ’76, better known as Rudy, and received the tutelage of former All-American lineman Andy Heck ’89. “These are the people that are the Notre Dame tradition.”

That or the Mass and meal in the same regimented pregame routine of the football team.

“They’re doing everything the team does,” Cappy Gagnon, the director of stadium personnel, said as he greeted a reporter arriving to chronicle another Notre Dame football Saturday, “except these guys all have tears in their eyes while they’re doing it.”

That or the poignant presence of Father Jim Riehle ’49, ’78MSA, the ailing team chaplain laboring with a cane after a stroke, offering the final, hopeful words before they took the field for the climactic touch football game.

“Our Lady of Victory,” Father Riehle said, prompting a response in the collective tenor of a huddled football team, “Pray for us!”

That or touching the famous “Play Like A Champion Today” sign and running out of the shadowy tunnel into bright sunshine and hearing their names introduced over the public address system.

That or the leprechaun tattoo on the left arm of Most Valuable Player Kevin Dunigan, his only tangible connection to Notre Dame until the fantasy camp allowed him to be a star quarterback for the Irish.

“I tell everybody they brand you when you’re born in my house,” Dunigan said, lifting his shoulder pads to offer a better view of the leprechaun as his eyes wandered around Notre Dame Stadium. “To do all this in here, I’m walking on air. It’s just unbelievable.”

That or the sheer will of Robbie Horton, the losing quarterback who played with the resilience of Montana despite a shoulder reconstructed a month earlier after a boating accident.

“I’ve got to play football for the Irish in four weeks, and I’m going,” Horton told the paramedics carrying him off the boat on a stretcher. “Somebody’s got to get me right.”

That or the wonder of Nigel Brown, an American football aficionado from England, who made a pilgrimage to experience the place he had admired from afar since seeing Sugar Bowl highlights as an 11-year-old in 1973.

“Obviously, Notre Dame means so much more to the people who have really lived it than it can to me. Yet you get caught up in it, the emotion,” Brown said. “I came here being a fan, but certainly not like these guys. Going back, I feel exactly the same. There’s tears in my eyes.”