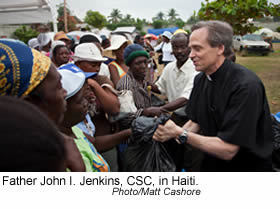 The ancient tradition of pilgrimage combines physical travel to a holy place with a spiritual journey. I had the chance to make two such trips in recent months.

In January I joined many Notre Dame students and faculty at the annual March for Life in Washington, D.C. Roughly 365 students had boarded buses and made the 12-hour journey. Some came several days early and had been sleeping on the hard tile floor of the St. Agnes parish center in Arlington, Virginia. When I arrived on the morning of the march, I chatted with the students before we celebrated Mass together. I would have been cranky after a night on the floor. They were upbeat, even excited. They were also prayerful. The readings that day spoke of the peace of God and the joy of the Spirit, which were evident in the congregation. It was a privilege to pray with them.

At the National Mall, surrounding a Notre Dame banner, we stood for hours on a gray, drizzly, cold day as a series of speakers delivered speeches which were, for the most part, forgettable. But our attention was less on the platform than on the community that had gathered to march. We had time to meet, chat and enjoy one another’s company. This continued as we marched slowly through the nation’s capital.

Angry rhetoric marked some speeches and signs — indeed, some of it directed at me — but my experience of the day was predominantly of sharing in a common commitment and hope. We gathered for dinner that evening, and it had the celebratory feel of a Notre Dame football victory. The issue that brought us to the nation’s capital was, of course, deadly serious, but the sense of community and the enthusiasm of the group made more powerful the witness they had come to make to life.

In early March I traveled to Haiti, already the poorest country in the hemisphere even before it was devastated by an earthquake. The airport and city had the feel of a war zone, with large military cargo planes flying the flags of various countries and soldiers from those countries in uniform, some with blue U.N. helmets. We drove by the shambles of the presidential palace, which had been a symbol of national pride and was now a condemned building, its grand white domes collapsed into the structure. In the large park in front of the palace were rows and rows of wooden frames, covered with plastic tarps and populated by adults and children whose houses had been destroyed.

We traveled a very slow 20 miles to Léogâne, where the Notre Dame Haiti Program is located. For 17 years, Father Tom Streit, CSC, ’80, ’85M.Div., ’94Ph.D., and his staff have been combating lymphatic filariasis (LF), a disease that leaves the limbs of the afflicted grotesquely enlarged and distorted. The center’s director is Jean Marc Brissau ’08LLM, a quiet, competent leader.

Since the January earthquake the site has become a medical center staffed by doctors and nurses, many of whom are Notre Dame graduates. Dr. Ralph Pennino ’75, a physician from Rochester, New York, and a person of tremendous energy, took us around a makeshift hospital and then to a tent now being used for medical care. We also met Brennan Bollman ’09, who took off a year of medical school at Harvard to reside in a tent and assist in Haiti.

The Notre Dame center not only treats the disease but also brings those suffering from LF together in a community. During our visit the Haitian women sang and prayed with an inspiring exuberance. I was asked to help distribute sacks of rice. As the women came up, some struggling on legs grotesquely bloated by this terrible disease, they embraced me and kissed me on the cheek. Sometimes we are granted the grace to see Christ in the poor and suffering, and the face of the Lord was particularly vivid in the eyes of those women.

On the day we left, we got up early to celebrate a 6 a.m. Mass for the doctors and nurses before they went to treat the many people who would line up that day at the quickly constructed hospital quarters. A choir of Hatian men from the nearby camp sang the parts of the Mass in Creole. The Eucharist sung a cappella in Creole by homeless Hatians with a congregation of doctors and nurses preparing to care for the sick — I’ve rarely had the chance to serve at such a beautiful Mass.

It is easy to forget the innocent victims of so many different kinds of violence in our world. I traveled to find in the eyes of our students on the March for Life, in the eyes of doctors and nurses who have given their own time to serve in Haiti, and in the eyes of the victims of LF joining to sing and pray, joy, hope and a deep reverence for even the most fragile and unappreciated lives. These people made the places I visited holy and turned my trips into pilgrimages. They were a gentle but powerful witness to life.