One month before my three-week summer study abroad with Notre Dame’s inaugural creative writing class in Ireland, I was admitted to the hospital for mononucleosis, viral meningitis and encephalitis. I barely remember the week I spent in that bed, too nauseous to eat and being awakened for blood samples every time I managed to fall asleep.

Back at home, my routine was an exhausting blend of relearning how to walk in a straight line, going to physical therapy, driving all over Indianapolis for appointments with infectious disease specialists and neurologists, and sleeping whenever possible. 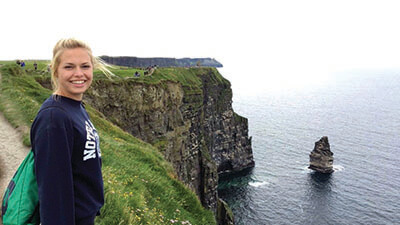 I also ended up fighting to go to Ireland. I had to earn the approval of every kind of doctor under the sun, start a round of steroids to attempt to recover the lost hearing in my left ear, and walk around my neighborhood for two hours a day to prove I could handle physical exertion. But in mid-July, three weeks after being discharged from the hospital, I was on board the eight-hour flight from Chicago to Dublin, backpack stuffed with doctors’ permission slips, happily straining to hear the classmates in my row as we introduced ourselves.

The 15 students in the program spent the first week in Dublin, staying at University College Dublin and busing daily to Notre Dame’s O’Connell House for classes. English professors Valerie Sayers and Joyelle McSweeney each taught a group, and our weekday classes ran from 9 to noon. Joyelle met with six of us on the fourth floor of the house, its walls covered in bookshelves and its windows open to a lucky week of Dublin sun. We discussed daily readings from published authors, practiced in-class writing using their standout techniques as inspiration and critiqued each other’s outside writing. It was a creative writing major’s dream class. The location didn’t hurt, either; Dublin stirred the minds of many great authors — Joyce and Yeats its greatest pride — and it certainly inspired us.

During this week, we had a walking tour each day, so I was grateful for my earlier practice walks. We toured the city, the National Gallery, the Chester Beatty Library, famous sites from James Joyce’s life, the Dublin Writers Museum and the National Library of Ireland. Each guide had a seemingly boundless knowledge of the writers of Ireland, the 1916 Easter Rising and the Irish Literary Revival. I particularly liked hearing little-known details — such as Joyce writing home to fact-check a building structure for Ulysses, or his publisher, Sylvia Beach, collecting books in English throughout war-torn France and starting a bookstore.

We also had time to explore the city on our own. We ate Irish-Asian street food, Irish Italian, Irish sushi, classic fish and chips, Irish Lebanese, Irish burritos and about 10 cafés worth of pastries. We went to huge tourist shops and tiny antique stores, took a liking to the Temple Bar district and asked far too many strangers to take group photos. It wasn’t until we were leaving Dublin that I heard a lady say, “I don’t like Americans,” loud enough to be overheard, but I’m sure plenty of people were thinking it as the 15 of us squeezed into restaurants, ran across busy streets and filled up entire cafés with our notebooks and scones.

After a week better than I could have imagined, we packed up and took a Mercedes minibus with a driver named Terry to Connemara in western Ireland. We were Notre Dame’s first class to stay at the newly renovated Kylemore Abbey, and renovated it was. Each of us had our own room, large enough to fit four people, and our own bathroom. We also had a common room with couches, to which I gravitated, two classrooms with beautiful views and a chef for all our on-estate meals. As grand as that stay in the abbey was, I’d have spent my two weeks there in a four-person closet and eaten nothing but prepackaged sandwiches for the chance to be part of this experience.

At Kylemore, we also withstood bugs, chills and pervasive dampness. Not that we minded. We explored tide pools at a beach, did a ropes course in the rain and watched a farmer whistle his dog up the mountain to return with a herd of sheep. We posed for photos on the edges of famous cliffs, hiked mountains (a far cry from the flat Midwestern roads of my physical therapy) and toured towns as big as Galway and as small as Clifden (nearly 10 bars in three streets). A Clifden shopkeeper asked if we were bored at Kylemore since it was so far from big cities, but we didn’t feel that way at all because Terry ferried us off the estate for activities almost daily.

The time that wasn’t scheduled was spent writing. We each had projects due at the end of the program — a writer’s final exam — to earn our grades and three credits. In addition, notable authors Kevin Barry, Ailbhe Darcy and Alice McDermott came in to discuss their works and read for us. Hearing about their writing routines, the elusive secrets of publishing or the struggles all writers face was at once relatable, enlightening and helpful. The talks also gave us a peek at what many of us are striving for: the life of a professional writer.

As I write this, somewhere over the Atlantic, I revel in the many amazing things I’m taking away from this trip: 14 new summer-camp-close friends, two writing mentors at my university, new writing ideas and a large portion of a novel. The Ireland experience was worth every MRI, syringe of blood and last-minute appointment to plea for approval to cross the ocean.

Kaitlin Scherzinger is a sophomore at Notre Dame, majoring in English with a concentration in creative writing, and minoring in Irish studies and business economics.