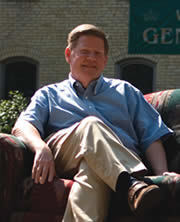 The student seemed one discouraging word away from tears. Looming class assignments, snowballing extracurricular demands and a festering bout of homesickness had collided to create a case of First Semester Anxiety.

“I’m not sure I can make it,” she confessed, avoiding direct eye contact.

With pep-talk phrasing, I assured her it’s often not easy to adjust to campus life. “Everybody has problems,” I remember saying.

Her personal clouds began to disperse after a few more upbeat utterances. Later I thought to myself: Little does she know.

Looking back on my own first year at Notre Dame—we were all freshmen in the late 1960s—I marvel that the University let me continue as a student, let alone join the faculty after serving time in graduate school elsewhere. Little did they know.

Midsemester deficiency reports (better known then as “pink slips”) arrived with frequency, with parents and student apprised of existing problems that could lead to ultimate failure. For me, the math and science requirements became a yearlong Stations of the Cross.

Fittingly, perhaps, salvation in calculus came from an ability to spell. The instructor’s Eastern European heritage was personified by his name, an impressive parade of consonants. On each quiz or test, he offered bonus points for correctly printing his last name.

When someone receives 20 out of 200 on the final exam, as I ignominiously did, a realistic teacher understands that additional mathematical tutelage is hopeless. He said as much when grades were posted, and I sincerely thanked him for my charity-case “D.”

Even in the realm of pass-fail instruction, I couldn’t avoid problems. In that long-ago age, the Physical Education Department conducted a mandatory swimming test that was as much rite of passage as measurement of aquatic prowess. Each student had to complete a series of laps. There we were, lined up at the Rockne Memorial pool without benefit of what the British call a swimming-costume. Who in that state would confess an inability to perform the routine?

I, however, floundered half of the first lap before a perturbed teacher-lifeguard fished me out with a long pole. Can an entire body blush? I learned the answer that day.

Dorm life normally provided a refuge from the slings and arrows of mental and physical development. But one evening, halfway through the year, some horsing around in Stanford Hall resulted in the little toe of my right foot becoming wedged under the room’s door.

Quick extraction and inspection revealed that the toe now pointed sideways. A neighborly football player, proud of his weight-lifting talents, gathered me in his arms—a Kodak moment in itself—and deposited me in the waiting room of the nearby infirmary.

When I showed the nurse my wounded foot, she said tape and firm shoes were the only remedy for a broken toe. After carefully strapping my big toe to the one next to it, she wanted to know whether the foot felt better.

“It’s my small toe. Should that be taped, too?” I inquired.

“You’ve sure got a fat big toe,” she retorted without apology or sympathy before setting to work on the actual injury.

Somehow, probably my parents’ prayers, I survived freshman year and spent the next one overseas on an international program. To be sure, an innocent went abroad—but nothing in a foreign clime ever compared to those early months of collegiate experience.

The last time I saw the student who provoked these repressible remembrances, she seemed at home on campus and sunny in outlook. Classes were going well, and she was debating whether to study in London or Dublin for her next year.

_Robert Schmuhl is Walter H. Annenberg/Edmund P. Joyce chair of American studies and journalism at Notre Dame. He is the author of _ In So Many Words: Arguments and Adventures, recently published by Notre Dame Press.