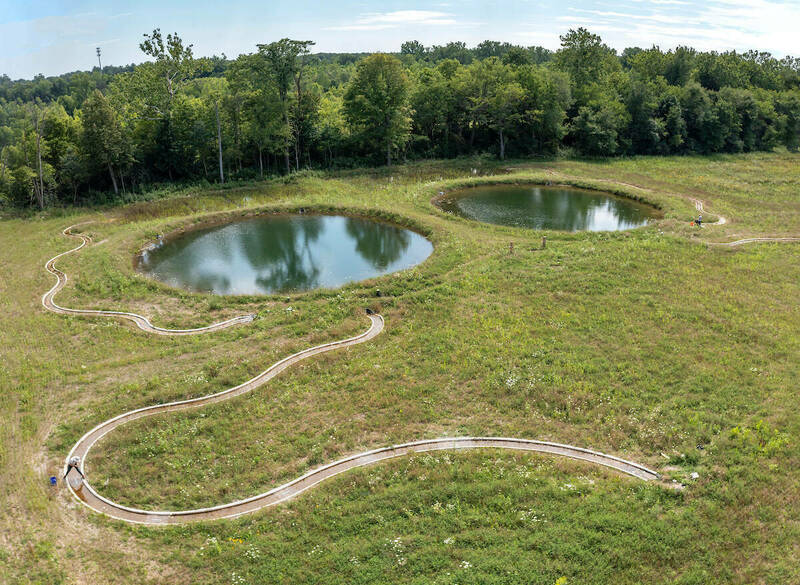 Tucked away just before the main entrance to St. Patrick’s County Park in South Bend, a narrow dirt road leads into an unassuming field of prairie grasses. Looking out over clusters of sun-soaked coneflowers, engulfed in the low hum of insects and the crunch of boots on gravel paths, one could easily mistake the acres of swaying plants for a recreational extension of the county park.

But the quiet bubble of flowing water reveals the presence of four man-made watersheds, each consisting of a stream, pond and wetland. Together, the watersheds comprise an innovative environmental science research area: Notre Dame’s Linked Experimental Ecosystem Facility (ND-LEEF). A division of the University’s Environmental Change Initiative (ECI), the facility blends the controls available in a lab setting with the realistic conditions of natural watersheds.

“One of the really cool things about ND-LEEF is this hybrid between having a totally controlled lab environment and doing an experiment in a river or lake, where it’s totally susceptible to environmental changes,” said Anna Vincent, a Ph.D. student in biology who does much of her research onsite.

In 2012 the University leased the previously little-used field adjacent to the main area of St. Patrick’s County Park to develop the research facility. To create the elevation changes needed to facilitate downstream water flow, truckloads of dirt were brought in, while a well pump system was installed at the top of the newly formed hill to transport water from a groundwater aquifer to its entrance point at the top of the ecosystem.

An analysis of the aquifer ensured that ND-LEEF’s use of the water would not deplete local groundwater, said assistant director Brett Peters ’10M.S., and chemical tests revealed the supply to be very low in nitrogen and other common contaminants. Because the groundwater that cycles through the ecosystems is so clean, Peters added, researchers can be confident that what they add to the water for their experiments are the only things present in the sample — a certainty that is unrealistic in true fieldwork.

After being pumped to the surface, the water is diverted in one of two directions: the streams of the facility’s Phase I watersheds, commissioned in 2012, or the waterways of Phase II, completed last year and put to use for the first time last month. Thirty-three manually operated valves control how the water flows into and out of the artificial ecosystems.

The beds of each stream are lined with various textured materials, from large rocks to pebbles and sand, allowing for variation within nutrient cycling experiments — different molecules flow differently depending on the surface they’re flowing over. The streambed materials are laid over a concrete base, which prevents the loss of experimental water into the soil. The Phase II waterways also feature concrete “guardrails” to prevent the planted grasses from encroaching on the parameters of the streams, a lesson learned from the plant growth that crowds the Phase I streams.

In a final step, any additions made to the water during an experiment are leached out in the wetland adjacent to all four streams, which prevents unwanted additives from bleeding into the surrounding area’s natural water systems.

The ECI and ND-LEEF were born out of a desire to foster exchange between researchers in seemingly distant fields, explained Diogo Bolster, the watershed facility’s director. The ECI was initially a space for collaboration between the colleges of engineering and science for investigations in environmental sciences, but under biology professor Jennifer Tank’s leadership, the initiative has grown to encompass each of the University’s five colleges and several graduate school programs. “If you work on anything to do with the environment or sustainability, we will work with you,” Bolster said.

Christened with its first experiments in the summer of 2013, ND-LEEF extends the original collaboration between science and engineering. Vincent and her colleague Elise Snyder, both Ph.D. students in Tank’s lab in the College of Science, make use of the watershed ecosystems for their research on the cycling of nutrients and biomarkers in waterways.

Bolster, who specializes in hydrology as a professor in the Department of Civil and Environmental Engineering and Earth Sciences, researches mathematical models of fluid flows in nature. He and his students make use of the natural flow patterns in the facility’s streams to make these models more realistic.

“One of the characteristics of rivers and streams that’s typically been neglected in historical engineering models is the fact that surface and subsurface water actually exchange,” he explained. “This means that you have fast-flowing water up top, slower moving water below, and they’re being subjected to different environments.” This also means that distinct microorganisms populate the two layers. Combined with biological data from Vincent, Bolster hopes to elucidate which reactions are happening in each layer.

Research initiatives were in full swing over the summer. In the Indiana humidity, accompanied by a soundtrack of birdsong, Vincent and Snyder described being on site from the crack of dawn until after sunset to run experiments and collect replicates of data all in the same day.

Vincent studies nitrogen cycling in stream systems to understand how fertilizers and pesticides affect the microbiome of waterways. In one experiment, she adds varying amounts of ammonia at the top of the stream and then measures its dispersal at regular intervals down its length. She also notes the growth, or lack thereof, of microorganisms on the surface of the water, to examine how chemical levels impact the nature and quantity of organisms.

Snyder’s experiments are similar, but instead of tracking the effects of nitrogen cycling, she studies a fragment of genetic material called eDNA, short for environmental DNA. When aquatic animals like fish shed fragments of DNA, researchers can use them to determine the species and quantity of organisms present. Although the technique is still being fine-tuned, eDNA sequencing is a viable alternative for catch-and-release biodiversity sampling.

Little is known, however, about the role that waterways themselves may play in the degradation or dispersion of eDNA, which are important considerations when translating samples to tangible data. Snyder’s work targets this knowledge gap by observing how eDNA samples interact with the watersheds at ND-LEEF.

In addition to microbes and molecules, animals have made ND-LEEF their home. Frogs relax on the shores of the streams and snakes slither through the surrounding grasses. In 2015, a pair of the bald eagles took over a red-tailed hawk’s nest and hatched one eaglet. Two years later, an in-nest eagle camera was installed to give researchers and casual observers alike a close view of the early stages of laying and incubating the eggs, as well as the chicks’ emergence and eventual fledgling flight.

While the University’s research initiatives are a primary objective for the facility, Bolster and Peters also stressed the importance of their close partnership with the county park and the opportunities for community connection it provides.  “The park is a great partner, where they ask us to take part in all kinds of outreach events that they’re planning,” Bolster said.

Across the prairie from the watersheds stands the Morrison Family Education and Outreach Pavilion, a large wooden structure designed by Notre Dame architecture professor Aimee Buccellato ’00. In line with the facility’s commitment to sustainability, the pavilion is constructed from locally sourced lumber, held together with wooden pegs, and supports solar panels on the roof.

Once a year, ND-LEEF offers a “Science Sunday” program where kids can interact with Notre Dame researchers. The event usually draws a few hundred people from the South Bend area. This year’s edition is planned for October 10th from 1 to 4 pm at the park. For older learners, Peters oversees a “Science at Sunset” program for an adult audience, featuring University faculty research presentations. Peters also directs visits for K-12 students, offering kids the chance to get their hands wet and learn about ecological research.

Peters and Bolster are hoping to expand the facility and its educational initiatives in the coming years. The grand plan, according to Peters, allows for up to six more watersheds to fill out the remaining unused acreage.

“If we’re truly talking grand plan,” Bolster added, “it includes a fully functioning research building with labs,” to offer support and analysis infrastructure for ongoing experiments in the watersheds. “This could be an extension of campus, essentially.”

Erin Fennessy, a senior biochemistry and French major with a minor in journalism, ethics and democracy, was this magazine’s summer 2021 intern.