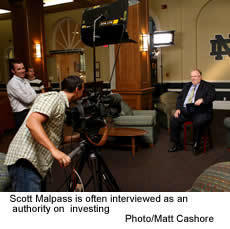 Notre Dame’s endowment grew 25.9 percent last year, pulling in $1.4 billion and placing the University second only to Yale in returns. The success is due to Notre Dame vice president and chief investment officer Scott Malpass and his investment team, who follow stricter ethical guidelines than do their colleagues at other top schools.

A modern-day Midas of money management, Malpass ‘84, ’86MBA, oversees the University’s assets, which include its working capital, charitable assets, pension funds and the endowment. The job has grown exponentially during his tenure. In 1989, the endowment stood at $425 million. Recently it eclipsed $6 billion, making it the 14th largest endowment in U.S. higher education and the largest among Catholic colleges and universities.

Since taking the investment helm, Malpass has brought a new strategy to the table.

“In the late ’80s, we wanted to diversify our funds,” he says. “We had new opportunities, new instruments, and we wanted to invest more in international real estate, private equity, hedge funds and commodities. We tried to modernize our approach.”

His accomplishments shine all the brighter given that he must conduct business in line with the University’s Catholic character. Notre Dame follows investment guidelines set in 2003 by the United States Conference of Catholic Bishops as well as its own social responsibility policy. The rules effectively blacklist 250 companies for practices that run afoul of Catholic teaching on life and social justice issues. These include corporations from any industry whose products, policies or philanthropic endeavors support abortion, contraception, embryonic stem-cell research, pornography or arms manufacturing, and companies that employ “sweatshop” labor or use discriminatory business practices.

“We want to be an ethical leader,” Malpass explains.

Recently Malpass divested from companies in Sudan because of concerns stemming from the lethal conflict in the Darfur region. Although the investment office does not discuss specific holdings, some of the restricted companies included energy corporations involved in partnerships with the central government, which uses proceeds from oil sales to buy weapons.

Malpass’ staff has met the challenge. The University’s highly diversified portfolio includes holdings nationwide from New York to Los Angeles, and internationally from London to Hong Kong. “We really are global investors,” the boss says. “Forty percent of our holdings are in non-U.S. currencies, from both developing and emerging markets.”

The endowment is actually a pool of 4,700 scholarship funds and academic programs, each of which has its own restrictions imposed by donor program limits. In general, Malpass says, current income and a portion of gains on the individual endowments is spent each year, while the purchasing power of the principal is protected.

Despite its consistently high performance, Malpass knows markets are testy. "We need a high real return of 5 to 6 percent after inflation in order to continue to fund and keep priorities on campus. The last 15 years, we’ve done 15 percent per year in net returns after fees. The average or median is about 10 for institutional investors.

“If we could do that again, I’d be thrilled.”

He remains optimistic. He says the university’s Catholic mission is one of the reasons he remains at the University rather than entertaining offers from the private sector.

“I’m a Notre Dame man. I think our mission, our community is so special. The older you get the more you realize how special it is. I’m so passionate about what we do here.”

Malpass loves sports, especially golf, and is an avid follower of politics. An Invest Like a Champion Today sign rests on a wall in his ninth floor office in Grace Hall, which features splendid views of Hesburgh Library and the Golden Dome.

Some days he can use the inspiration. Recently, Father Theodore M. Hesburgh, CSC, Notre Dame’s president emeritus, offered Malpass what he called the “10 by 10” challenge: to see the endowment reach 10 billion dollars by 2010.