When Professor Jim McAdams registered for a visa in 2008 that would take him to Pyongyang, North Korea, he was surprised more people hadn’t signed up. “I thought, there must be tons of people who want to do this.”

“I begged them to put me on the list.”

For a while, the only name on the list was A. James McAdams. 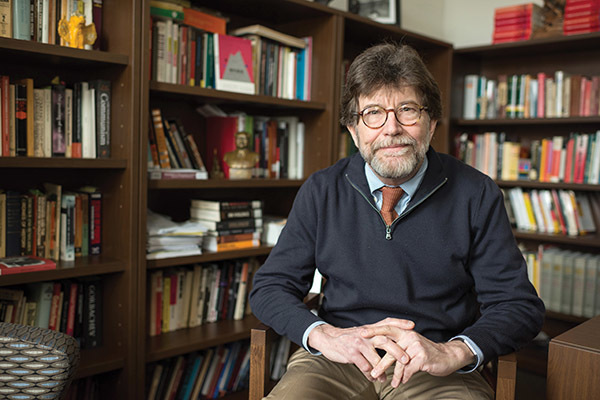 McAdams: “I’ve had a lot of wonderful trips and I’ve somehow survived them.” Photo: Barbara Johnston

McAdams is the William M. Scholl Professor of International Affairs at Notre Dame. I knew him in my undergraduate days as the director of the Nanovic Institute for European Studies, which bankrolls a lot of undergrad research trips to Europe and more than once brought my favorite gypsy jazz guitarist to Legends. Tom White ’14, a former research assistant and mutual friend, emphatically calls McAdams “the man.”

McAdams’ teaching and research in political science focuses on German reunification and European history. At the level of what he calls “big Notre Dame questions,” it deals with real-life attempts to create utopias and equally real regressions into hell. When we spoke in February, he was jolly and wearing a blue bubble vest, under a mop of dark hair that belies his age.

On the agenda was McAdams’ 2017 book, Vanguard of the Revolution: The Global Idea of the Communist Party, published by Princeton University Press. Appropriately for McAdams, whose freshman-seminar syllabus reads, “I expect you to treat your books and articles as objects of quasi-religious devotion,” it’s a beautiful, weighty, maroon hardcover that you could use as a shelf decoration. Crack it, though, for a bracing history of Communism, from its first mention as an amorphous specter haunting Europe to the breakup of the Soviet Union and the collapse of the Berlin Wall into a pile of concrete and rebar, all written for a general audience. McAdams’ prose is clear even to readers whose undergrad history requirement stayed firmly on this side of the Atlantic.

Karl Marx’s ideology, encapsulated in the phrase, “to each according to his needs” — a slogan he popularized some decades after the 1848 publication of his Manifesto of the Communist Party — rapidly gained political sway in the 19th century. But the party’s institutional magnitude is easier to forget.

In 1985, when Mikhail Gorbachev became general secretary of the party in the Soviet Union, the world’s 24 communist regimes commanded 38 percent of the global population, or 1.67 billion people, McAdams writes. There were, by comparison, 35 liberal democracies. In this, the first comprehensive history of the party, McAdams makes an argument for how it grew and functioned in countries from China and the Soviet Union to Cuba and throughout Latin America.

In a bit of irony for a political movement whose ideas centered on the sublimation of the individual to a collective — “my own fate was of no account compared to the struggle being waged,” as one Yugoslavian revolutionary wrote — communist parties tended toward the centralization of power in strongman leaders who sculpted the “revolutionary idea” to their own ends.

McAdams is not now, nor has he ever been, a Communist, but Vanguard is the latest step in an interest he’s had in the shakings of 20th century Europe since 1973, when he was a 19-year-old studying German in West Berlin, encountering the Wall on a near-daily basis, wondering what people were thinking about on the other side.

“It was exotic enough to satisfy my curiosity about human beings,” he says.

He believes “you really can’t write about countries with any authority unless you’ve at least visited them,” and says he’s visited 95 percent of the dozens of countries named in his book, many of them in the 1970s and ’80s when big-C Communism was still a global force.

At times that curiosity and optimism has edged toward the dangerous. On his trip to Pyongyang several years ago, he stood opposite the librarian of the Grand People’s Study House, the two men bowing back and forth, McAdams trying to leave a book for the collection. The gift, a copy of his Germany Divided: From the Wall to Reunification, caused a dustup with police that the political scientist has lived to discuss.

“I did a — kind of a dumb thing,” he says of the exchange. But today in the reading room of a multistory library dedicated to the study of North Korea’s supreme leader, there’s at least one serious book about reunifying a divided country.

McAdams is best known among undergrads for his freshman seminar, Ten Images of Hell in the Twentieth Century, which covers World War I to 9/11 and considers concepts of hell from the universal (Image Three: Life Itself) to the more specific (Image Nine: The Plight of the Refugee — Hell on Earth) to the considerably closer-to-home (Image Six: Technology ’R’ Us — a Hell of your own making). One of the more important questions he wants these freshmen to ask themselves is “Why am I here?” — both in the broadest, most daunting existential sense and in the most local: why at Notre Dame?

For McAdams, the director of an academic institute nestled within the Keough School of Global Affairs who is now in his 25th year at the University, it’s the freedom and encouragement to explore the things he likes in the broadest way, inclusive of God and all the things that follow. He’s working on a new book project, hosting a conference on the year 1968 and ready to move the time period of his Hell course into the 21st century, which he says has given him plenty of material. For a guy so academically well-versed in dictatorship and death, he’s visibly content.

“I’ve had a lot of wonderful trips,” he says, “and I’ve somehow survived them.”

Alex Caton is a writer living in Washington, D.C.