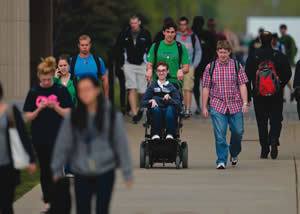 One day in May, the videographer in the Multimedia Department at Notre Dame affixed a GoPro camera to the wheelchair of Matt Swinton ’12, a finance major from Dallas. The GoPro is the Navy Seal of cameras. It’s designed to ride on surfboards, motocross helmets and extreme skiers.

Riding a wheelchair across campus may not seem adventurous, but when Matt moved to Notre Dame as a freshman, it was the bungee jump of his life. The camera was a window to campus most of us never peer through — a view from three feet off the ground, moving up and down ramps and through handicapped-accessible doors. In our video about Matt and the campus community that has embraced him the past four years, the University looked the same but felt different.

Doctors diagnosed Matt with spinal muscular atrophy when he was a baby and gave him a year to live. Later, when a company in New England offered his father, Mike, an executive position, he turned it down because young Matt was too fragile to survive in a cold climate. The company arranged for Mike to remain in Texas and commute every week. So Matt grew up in Dallas, visiting doctors, undergoing hours of therapy and going to school.

Mike and DeAnn Swinton now confess that when their son was little, one of their private jokes was about saving for college. When adding a candle to a cake each year is never assumed and tasks as small as using a water fountain don’t seem attainable, how could college be realistic? But Matt excelled in school. He was accepted at a number of top-ranked universities. Naturally DeAnn pushed for the ones in warmer climates. She feared the frosty months in South Bend might isolate him because he’d have to stay inside so much.

Spinal muscular atrophy affects the voluntary muscles, leaving Matt extraordinarily weak. While he can use his hands, he cannot raise his arms; he cannot roll over so must be turned periodically. Because respiratory muscles are also voluntary, Matt cannot take a full breath, cough or clear his lungs — so any infection becomes life-threatening. South Bend didn’t seem like the place for him.

But Matt loved Notre Dame, where he had attended some football games. And he wasn’t the only one who persuaded his parents. “Notre Dame did the majority of the convincing,” he says. Before he even wheeled onto campus, the University architect’s office had devised a plan to renovate a dorm room to meet his needs.

Roommates were one of the aspects of college Matt wanted most. Stand-up comedy is his hobby, and he needed people to critique his jokes. Other schools had offered single rooms and couldn’t promise the same residence hall each year. But just off the second-floor lounge of O’Neill Hall, architects created a suite of rooms that connects to a private bath. Matt had one bedroom for himself; his two roommates shared the other. Instant community.

After Matt arrived on campus, the health attendants hired to assist him proved unreliable. Overruling his parents’ concerns, he convinced them the students he’d met at Notre Dame were far more capable than the professionals. He circulated an ad in the dorm, and 11 students in O’Neill stepped up that day. So for the past four years, several young men have helped Matt with every daily task imaginable — washing, dressing, compassionately carrying him from wheelchair to sofa to bed. Every night, including weekends, they took turns sleeping on the cot beside his bed and waking four to five times to turn him to keep him comfortable and prevent pressure sores.

Members of this humble group have become Matt’s dearest friends. Interviewing them one day, I thought of a priest who once asked me, “When is the last time you saw the face of Christ?” In my head I was shouting, “Right now! Right now!”

Matt found academic support through Notre Dame’s Office of Disability Services. It provided note-takers for his classes. The Swintons were amazed at the accessibility of all the buildings. “There’s really nowhere on campus I’ve wanted to go that I haven’t been able to,” Matt says. Even after the deepest snow, the grounds crews cleared the sidewalks before dawn. The only time he wasn’t able to make it to class was when a friend forgot to plug in the charger to his power chair the night before. Matt called the professor and said, “I’ll bet you’ve never heard this excuse for missing a class before. . . .”

At football games, the University assigned him two seats in the handicapped section so a friend could sit with him. At pep rallies, the men of O’Neill would announce their arrival with the giant hall flag attached to Matt’s electric wheelchair. After every game, Matt joined the students in the alma mater, swaying his chair side to side. Win or lose, a community.

As Matt’s family gathered for commencement, they spoke of the Notre Dame family as something real, not just as a trite metaphor. Countless people had supported and mentored him — Mendoza faculty like Bill Brennan and Carl Ackermann, rector Ed Mack, Scott Howland of Disability Services and roommates like Nathan Albertson, Michael Landron, Eric Vaughn and Manan Dhingra.

Matt is now employed as a financial analyst in Dallas with Sabre Holdings, a global travel-technology company. He says of his ND experience, “Before coming here, I had a very big definition of what independence was. I thought it was doing everything by myself. Notre Dame taught me you can achieve what you want and be independent, but you can ask for help. That’s not a bad thing, and there are people willing to help. I learned you don’t have to go it alone.”

Beth Grisoli is the director of multimedia services at Notre Dame.