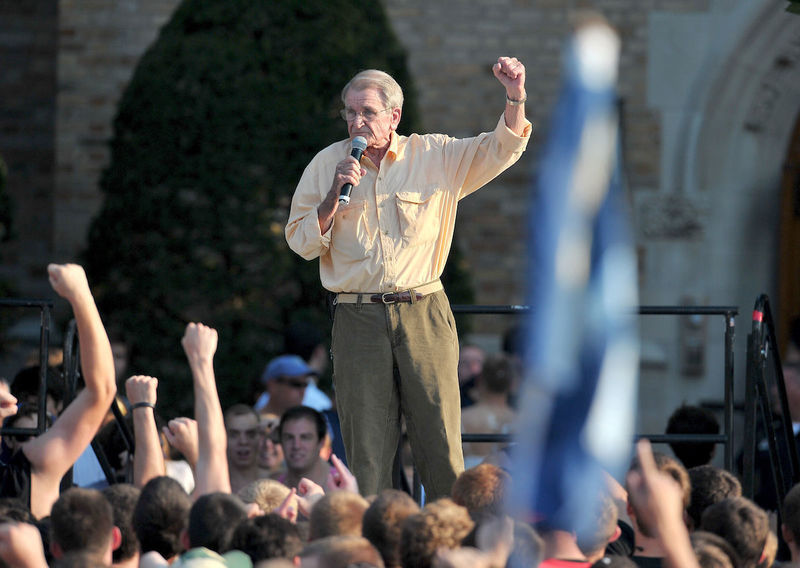 Editor’s Note: Tim McCarthy, who delivered safety messages laced with one-liners at Notre Dame football games for 55 years, died October 1 at age 89. We remember McCarthy with a look back at this profile from our autumn 2000 issue and a list of his favorite punch lines.

“Who wants to listen to a policeman telling everyone to behave themselves?” Tim McCarthy asked himself. He knew the answer.

The year was 1960 and McCarthy had just been promoted from trooper in the Indiana State Police to safety education sergeant. One of his new responsibilities was to make an announcement at Notre Dame home football games reminding people to drive safely on the way home, but after two games he knew people weren’t paying attention.

He decided to change that by adding something to the message.

At the first home game in 1961, the message was about drinking and driving, and McCarthy ended by saying, “The automobile replaced the horse, but the driver should stay on the wagon.”

Well over 200 announcements later, fans in Notre Dame Stadium fall silent in eager anticipation during the fourth quarter when they hear, “May I have your attention, please. This is Tim McCarthy for the Indiana State Police.”

They know what’s coming: a reminder to drive carefully and courteously on the way home, punctuated by an often groan-inducing play on words.

10. “Don’t let your day go down the drain by forgetting today’s safety plug.”

8. “It takes a strong heart to drive on clogged arteries.”

7. “No one relishes a pickled driver.”

5. “Keep your driving well-polished to avoid having a bad finish.”

4. “Horsing around in traffic after dark could become a real night mare.”

2. “Drinking drivers are like light bulbs: The first to get turned on are the first to burn out.”

McCarthy says he got the wordplay idea from a friend of his, Chicago policeman Len Baldy, who used the device in the helicopter traffic reports he did for a radio station. Baldy gave McCarthy a few ideas to try at Notre Dame games. After running through these and receiving a good response, it was up to McCarthy to keep the tradition alive.

Early on, the safety sergeant worried that the gag might be taken as trivializing the hard and dangerous work the state police perform, so he reverted to announcing the messages straight. But fans kept asking for punch lines. McCarthy says he knew then that if he reinstated the punch lines, fans would listen more closely than ever.

These days when he makes the announcements McCarthy identifies himself as “for” the Indiana State Police rather than “of” because he retired from the force in December 1978 after being elected sheriff of Porter County. He later was appointed county tax assessor. In 1999 he retired from political life to form his own company, which does tax appraisal work for assessors.

The 68-year-old admits he still gets the jitters when he steps up to the mike. He says it’s not easy coming up with new plays on words, so he keeps an ear out for them throughout the year. He gets a kick out of fans’ reactions and says he doesn’t mind when the lines aren’t met with applause.

“I’ve been booed a few times, but that’s OK because I knew they listened to the safety announcement.”