Yep, 250 bucks. Not a bad prize for a treasure hunt. It explains the thousands of Notre Dame students — judging by daily Twitter views and visits to the hall website — who were combing campus in April to find Morrissey Manor’s slender wooden medallion.

Like everyone else, the team figured the first clue was obvious. “Perched with a view of the top of the Dome”? Piffle. At Notre Dame, that could be just about anywhere in sight of Our Lady, whom you can see from the Toll Road. Not helpful.

Day 2’s wild-eyed cipher clue was way more challenging. Smikle, who was assigned to research the group’s leads, says Joe Farley recognized that the cipher was in binary. Sully Curry solved it. Don’t ask how. “From the line of Moreau,” the decoded cipher read.

Smikle spent hours “researching everything there is to know” about Father Basil Moreau, the founder of the Congregation of Holy Cross for whom the seminary on the north shore of St. Joseph’s Lake is named. The seminary has a stunning view of the Dome. Perfect! So at midnight on Day 2, the fivesome tromped over to Moreau Seminary and searched for an hour. Nothing.

Turns out they were c-c-c-cold. Not because the overnight low dropped to 40 degrees, but because the dome in question isn’t golden at all. It is white and shallow, and shelters things like basketball games and convocation Masses. The Joyce Athletic and Convocation Center. The JACC!

Only they didn’t know that yet.

They also didn’t know what “from the line of Moreau” was supposed to mean. By Wednesday, Day 3, the medallion was still up for grabs.

The clue that morning mentioned priests, professors, saints and sinners. The group tried to follow the sightline from Moreau’s window in the chapel of Stinson-Remick Hall across Notre Dame Avenue to the Eck Center. “We were so excited about that one,” Smikle says. “Obviously, it wasn’t there.”

Fortunately, Smikle says, her research had included “about 25 visits” to web pages about statues on campus. She was in class at Pasquerilla on Wednesday afternoon when she got the call from Dennis Miller. He’d been reading the clues out loud when it occurred to Jonah Poczobutt that the statues had to be the ones on the façade of the Jordan Hall of Science.

Smikle bolted out of class and sprinted to the lawn on Jordan’s south side, where she found her teammates staring at the ground around the sundial. Sure enough, there was a line on the pavement that reads, “The day of Moreau’s death.” It pointed to a mature and gnarly tree.

Now let’s turn to Dan Courtney, one-third of the clue-writing team of Morrissey Hall seniors. If the winning seekers had needed Thursday’s clue, Courtney explains, they might have learned that the “king” in question was Hezekiah, the Hebrew royal who witnessed the miracle of the sundial mediated by the prophet Isaiah, as recorded in the Second Book of Kings.

But they didn’t need that. Nor did they need the clue Courtney had written with Austin and John-Paul Zebrowski to discover on Day 5 that Moreau’s death line pointed directly toward a tree on the Jordan lawn with a splendid view of the Joyce. (The ACC? Whatever.) 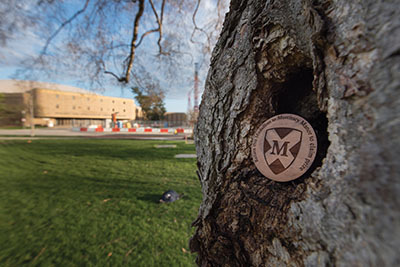 Says Smikle, “Dennis put his hand in the hole in the tree and pulled out what looked to be a wet, muddy, wadded-up trash bag. We thought someone had already found it and stuffed trash in there to spite us. Then, kind of like out of a movie, the bag unfolded and exposed the gold Morrissey crest. Dennis dug through the bag and pulled it out, and we went crazy.”

Crazy enough to buy a whole lotta Chipotle. And share it with their friends.