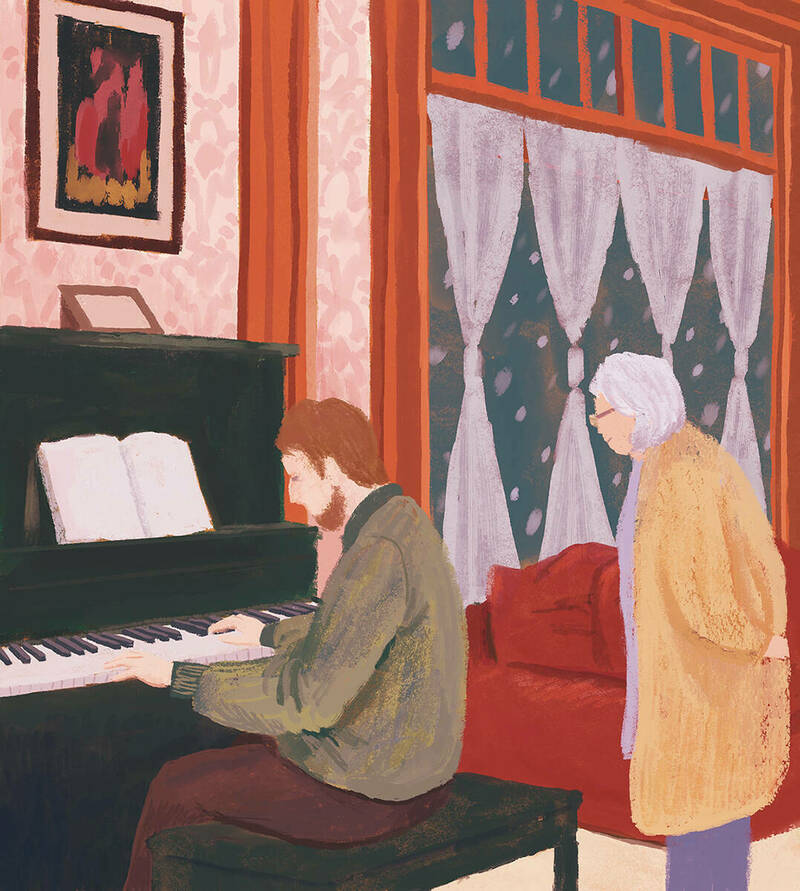 When I walk through the doors of the Herbert Grand Hotel on a clear December day, I’m carrying a backpack full of music books. The hotel has a creaky, old piano in its lobby, and I like to play it to pass the time.

At the front desk is a woman I don’t recognize. I ask her if Dawn is around, and I can tell by the look on her face what the answer to my question will be. “I’m sorry,” the woman tells me.

The Herbert is located in western Maine, not far from the Sugarloaf ski resort, where my wife, daughter and I spend a lot of time. Not that I’m a skier. Growing up in a working-class neighborhood in Philadelphia, I didn’t know a soul who skied. The sport has always seemed foreign, expensive and vaguely dangerous to me. My wife, on the other hand, is from Maine. Learning to ski was a part of life for her, much like learning to swim or ride a bike. Our daughter was put on skis at an early age and fell in love with the joy and exhilaration of it.

I tag along on their trips to Sugarloaf, but while they are dashing down the slopes, I am left to amuse myself. I suppose many people would simply sit by the fire in the condo, a warm drink in their hands, and wait for them to return.

But I’m not one for sitting still, especially in the winter. In western Maine in winter, the daylight is soft and fleeting. Night comes early. As the sun goes down, the small towns and wilderness pass from gray into black. Once that happens, you just want to curl up under a blanket. In the night, the wind howls as if to blow the condo right off the mountain.

While I can during the day, I leave the isolated bubble of the ski resort. I long to wander, to go places and be among people. In the morning, before the shadows creep across the valley, I’ll hop in the car and set off on Route 27, the road that runs along Sugarloaf. Logging trucks in a great hurry blow by along the twists and turns of the Carrabassett River. Mountains rise all around, beautiful and immense, making me feel small and inconsequential.

I have regular places I go, spots the typical skier headed to Sugarloaf usually passes by. Taking 27 north to the small town of Stratton, I stop by the White Wolf, an inn and restaurant where Sandi, the owner, keeps my coffee cup filled and always has something to tell me about business or the weather or the weird happenings in the north country. The place fills with snowmobilers who dump their helmets and gear in the back and then pile into booths and order rounds of beer. True to its name, the inn is filled with wolf paraphernalia: pictures on the wall and a sign for The Wolves’ Den above the bar.

Or I head south to the Kingfield Woodsman and order Special No. 1: two eggs, toast, home fries and coffee for $6. Men of a certain age sit with newspapers, and everyone seems to know each other and say things like, “Come by the house tomorrow,” and “How’s your mother doing?” I sit at the counter on a seat made out of a tree trunk. A sign by the cash register reads, “We do not have Wi-Fi. Talk to each other. Pretend it’s 1995.”

A bit farther down the road is the Herbert Grand Hotel, and to step through its doors is to travel much further back in time than 1995. In the cozy lobby I find old phone booths, a bear head on the wall, that creaky upright piano and a hint of the memories that must come with a hotel that, according to its website, opened in 1918 as a place for “Maine politicians to indulge in bathtub gin and unsavory women.”

I’ve been playing piano since I was a kid, but I don’t often have the chance to play for others, so that piano is a big reason I come to the Herbert. Sitting at the ancient upright, which is probably as old as the hotel itself, I play show tunes and Sinatra, old rock ’n’ roll and Irish drinking songs. The piano makes a wonderful racket, but it is showing its age. It’s a little out of tune, one pedal doesn’t work and the low notes sound like they’re coming from the bottom of a well. You can hear the hammers and strings straining inside.

Still, when I play, the lobby fills with music, enough to chase away any ghosts that might be hanging around the supposedly haunted hotel. Rob, the owner, loves my playing. People coming together is why he bought the place. He’s encouraged me to stop by anytime. “I should give you the key,” he said.

Dawn was his mother. A writer from New Jersey, she managed the hotel and looked after it whenever her son wasn’t there. Often over the years she was an audience of one. She’d wander over, talk to me between songs, bring me a glass of wine. “On the house,” she’d tell me. Dawn was such a fan that, when she became sick with cancer, Rob called her at the hospital and held the phone out so she could hear me play.

Months went by after that, and the ski season passed into spring and then summer. When I return in December, Tabi, the desk clerk, informs me that Dawn has passed away. I don’t pretend to have known Dawn well, but she was a woman who enjoyed a good song, and so the only thing to do is to play.

I sit down at the piano and don’t get back up for a good two hours. At times rolling and rollicking, other times soft and slow, the music flows from me and lifts up the lobby. I play for Dawn, I play for the hotel’s old ghosts, I play to fend off the gathering dark of the mountains, I play for the sheer joy of it. Tabi is astounded by this stranger who walked through the door bringing song. She posts a video of me playing on Facebook and forwards it to Rob, who sends his thanks.

“What a surprise,” Tabi says. “Dawn would have loved it. Come back any time. That was lovely.”

Exhausted, I push away from the bench and say goodbye. As the light dims, the afternoon slipping away, I head back up Route 27, my day of adventuring nearly over. The time has come to reunite with my daughter and wife and hear about their day on the slopes, to hunker down before the sky turns black and the only lights on Sugarloaf are the snowcats grooming the trails for another day of skiing.

A resident of Natick, Massachusetts, John Crawford is a senior journalist at Babson College, where he writes for the news site and magazine. His Twitter handle is @crawfordwriter.