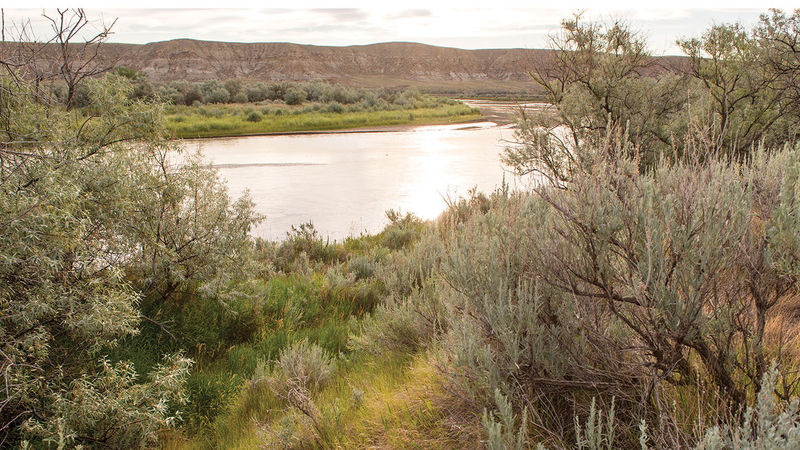 One day, while surveying a patch of his family’s ranch along the Milk River, David Aageson felt something. Something holy. Like he was on sacred ground.

David and his brother, Verges, had raised cattle and grain for years on their land in northern Montana without giving much thought to its beauty or history. They took for granted the view of the badlands rising abruptly from the high plains, and the silty Milk curling through on its way from Canada to the Missouri River. They paid little attention to the archaeological richness that reveals glimpses into the Native American past or to the epochal cache of fossils. They were focused on making a living.

As they aged, the Aagesons began to appreciate and learn more about their land’s significance. So they opened its treasures for tribal and academic groups to study. Preserving their historical inheritance for posterity had become a priority for the brothers even before David felt himself in the presence of a mysterious and moving force, but it intensified for him that day.

A sensation surged through him, a spiritual experience he still struggles to articulate more than 15 years later. An archaeologist working with local tribal leaders eventually discovered a Native American burial ground on the ranch. David Aageson, unknowing, had been standing that day among the dead.

Conserving the land to respect its significance and educate future generations about its history became even more important to the family. And Notre Dame is among the partners exploring its academic potential.

Students spending the summer in Montana with the University of Notre Dame Environmental Research Center (UNDERC-West) visited the site for two days in July, sampling its expansive opportunities to learn and simply explore. For the students, it was a diverting excursion a little more than halfway through two months of ecology classes and field research, with the added bonus of camping at Glacier National Park on the return trip.

Directions to the Aageson ranch included turning off U.S. 2 at the “4 silver grain bins” on the side of the road, then 24 miles of gravel turbulence with a dust cloud in your wake. Although the road runs dead straight and comes to a T so I couldn’t miss my next turn, the wide open prairie seemed to lead nowhere. An occasional deer glanced up from a field with a nonplussed expression that didn’t help me feel like I was headed in the right direction.

Then, to feel even more out of place, I showed up unannounced at Verges Aageson’s door as he was finishing dinner. The only way to announce one’s time of arrival is to call from back at the grain bins where there’s reliable cell service, but I didn’t have the number. Still, he welcomed me like an old friend, offering food and drink and convivial laughter as if we already shared inside jokes.

When Angela Laws, the UNDERC assistant director, called from the highway, Verges led me back to the T in the road where he planned to meet the group of students. Their cloud of dust soon appeared in the distance, and when they reached us Verges eased into an affable rapport with his vanload of new acquaintances almost before they could finish introducing themselves.

We gathered for pizza on the ranch in a riverside valley where the students would camp. A game biologist explained the operation of the 4,500-acre “wildlife management area,” which part of the Aageson land had become in recent years through a deal with the state of Montana. The family retained the archaeological and paleontological rights on the ranch for educational uses — the purpose of the UNDERC students’ visit that began in earnest the next morning. 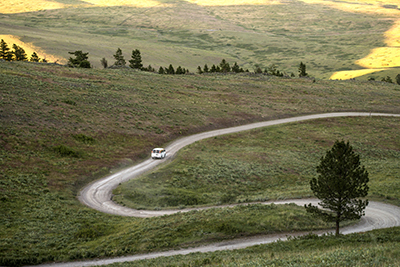 David Aageson, his brother’s equal in genial hospitality, served as tour guide. The student van followed his pickup over trails out into the ranchland within view of one of its most notable historic spots. We stood on a ridge overlooking Milk River, our best view of it yet, and heard about Army General Alfred Terry’s pursuit of Sitting Bull across this territory in 1877.

After defeating Custer’s 7th Calvary at Little Bighorn, Sitting Bull fled to Canada. It fell to Terry to try to persuade the exiled Lakota leader to return to the United States. Terry’s path took him across the trail from Fort Benton, Montana, to Sitting Bull’s refuge at Fort Walsh in Saskatchewan.

There are signs of about 12,000 years of human life in the surrounding area. Evidence of some of it is still on the ground around the ranch.

When UNDERC director Gary Belovsky ’72 first visited the Aageson ranch years ago, David eagerly began to tell the tale. But Belovsky already knew the story, and he contributed the added detail that a Notre Dame chaplain had accompanied Terry on his journey.

David prefaced his remarks by asking the students not to let him talk too much, a risk with 73 million years of history to fit into only a few hours, but they were eager to listen. Only the wind interrupted.

Under thick gray clouds, stinging gusts chilled the midsummer morning and carried every few words away unheard. Those conditions diverted attention to the stories to be found in the ground, and the students were content to unearth those.

Down a steep and somewhat unstable hillside, they scattered to survey plant life up close and scour the land for whatever fossils they could find. There would be a trove to discover later at another spot, they were assured, but they explored just like David promised he could talk — with inexhaustible enthusiasm for a 73-million-year archive of life on Earth.

Some could not contain their enthusiasm for ecological current events, like a mint green grasshopper that somehow had avoided predators despite wearing the insect equivalent of a flashing neon light. We all huddled around to marvel at his good looks and snapped pictures of him like paparazzi.

Then we walked back toward the cars across native shortgrass, a fascination in itself to this field ecology class. The students quizzed David about how it compared to grasses bred and introduced to the prairie for grazing cattle. While the bred grasses offered higher volumes, he said, the comparatively sparse natives had more nutritional value.

“Cattle that eat that big tonnage grass,” he said, “tend not to weigh as much as those that eat this little short, puny-looking stuff.”

On our way to another Aageson-provided big tonnage meal for lunch, we arrived at the student campsite to find that the wind had tossed the tents around like beach balls. The shelter was more easily rearranged and anchored than some people’s hair under those conditions.

“It has freedom of expression,” one student consoled another, who was fussing about uncontrollable flyaways.
Whatever the follicular ramifications, nobody wanted protection from the gales when there were relics of prehistoric life to hunt. We parked next to a field of garbanzo beans and followed David down a trail over fresh elk tracks into a coulee of promised archaeological riches.

Bones and teeth, garfish scales from the inland sea that once filled this valley, fossilized wood — the students found them all. A scattering of coin-sized bone fragments were embedded in a hillside, broken in a way that looked like floor tile.

Instead the students dispersed, roaming alone or curling into crevices to dig through their own patches of clay, bringing discoveries to David for identification. Some were just rocks, but most he could confirm as prehistoric reptile bone or fish scale or fossilized wood. 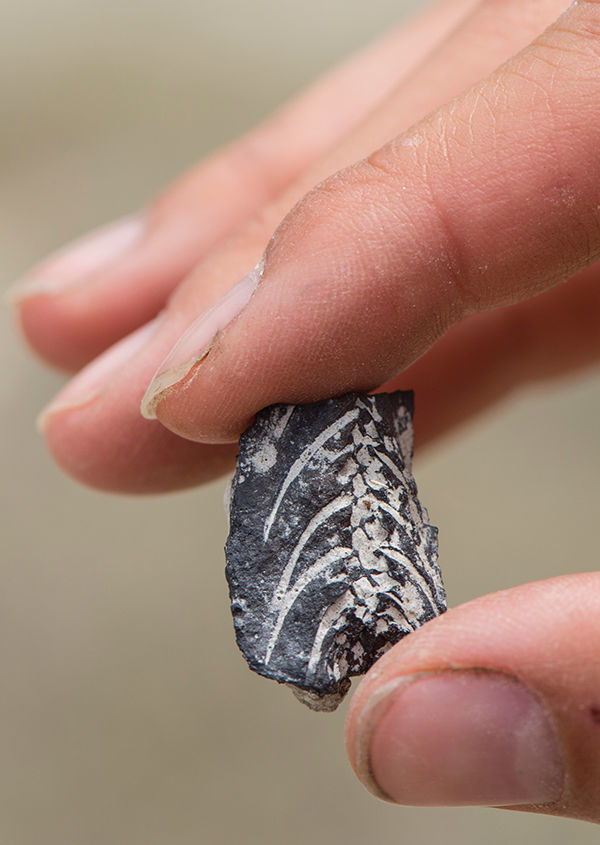 “That’s the first vertebrae of the day,” he concluded when Sam Harrow held out one find for confirmation.

Amid the digging, Amanda Michaels, a Virginia Tech graduate student and the class teaching assistant, noticed Cinzia Ballantyne engaged in her usual pastime.

“Cinzia, are you looking at plants?”

“I sure am!” she said, unrepentant.

A little while later, a beetle padded into Cinzia’s field of vision and she was ruined, like the grasshopper groupies earlier.

“You are so pretty!” she told the bug as others huddled around for a look. “This is what I came here to look at.”

There was almost too much to look at, from the tiniest insects to the dwarfing expanse of land and sky that makes you feel like one. Much of the value of visiting a place like this, David believes, is spiritual nourishment, silent contemplation of the natural world, a reorienting of the self away from cellular data and toward the transcendent.

He escorted us up from the coulee and drove across the ranch to the site of Native American camps that only added to the sense of being consumed by history. There are signs of about 12,000 years of human life in the surrounding area. Evidence of some of it is still on the ground around the ranch. There is a buffalo jump, a ridge where tribes would lure herds either over a cliff or into a natural pen where they could be easily hunted.

At high points overlooking the river, the Aagesons have found about 1,000 teepee rings and cairns, probably a fraction of the total number. The area down below, better protected from the elements and nearer to the water where tribes would have spent most of their time, has been subject to much more erosion that would have buried campsites.

“Archaeologists have told us, if you identified that many teepee rings up on top, you have just scratched the surface,” David said.

That’s how he feels about his knowledge of the land itself. It has been in the Aageson family since 1913, when his grandparents came from Minnesota as homesteaders. Only in the last 15 years have the brothers begun in earnest to learn what came before, deepening their connection and commitment to preservation.

“It links you to the land in a different way,” David said, not just through the personal importance of family history but through tangible encounters with 12,000 years of human life and far, far beyond.