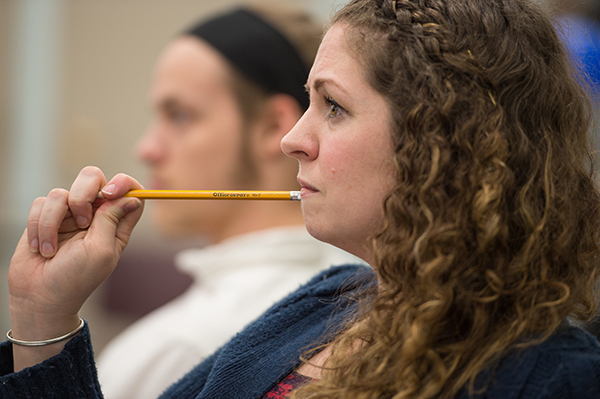 “Costumes don’t define who we are. It’s characters.” That sounds just like something Christy Burgess would say, but she’s not within earshot. Her students are channeling her.

Shakespeare company members from the Robinson Community Learning Center, mostly high school freshmen and sophomores, are teaching Notre Dame students how to act. The college kids are here as part of a community-based learning course, spending an hour a week outside the classroom to broaden their academic experience. 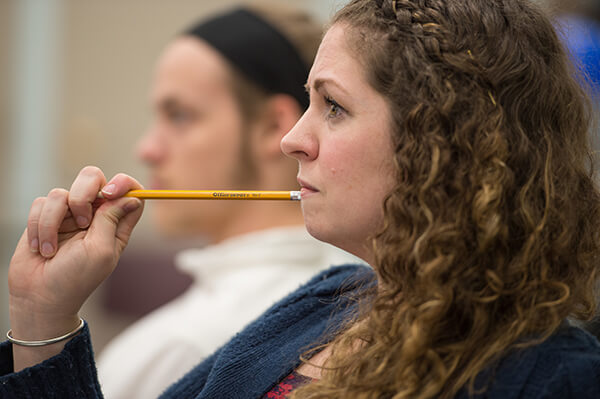 Burgess, who directs the Robinson Shakespeare Company, organizes these interactions toward a kind of equality of responsibility, rather than having the college students parachute in as de facto mentors. The Shakespeare kids have lessons to impart too, hard-won knowledge from years on stage.

For this exercise, they’ve broken into groups and the young Shakespeareans are directing the Notre Dame students in scenes from Cymbeline. They’ll rehearse for a few weeks, then the college students will perform in front of everyone.

One of the first things they need to understand? The quality of their performances will come from within, quite apart from costumes and props and sets.

Burgess bristles at Shakespeare productions that distract from the language and story with bells and whistles, signifying nothing. If the actors can’t convey the drama in plain clothes on an empty stage, she (and her protégés) say, “it’s not good Shakespeare.”

Burgess’ influence reverberates through the way the Robinson ensemble members approach their directorial debuts. Two Notre Dame students will perform a scene as cowboys. One of them innocently asks the teenaged directors if they’ll have access to the Robinson Center’s costume shop.

That’s when company member Monica Caponigro instructs them in the essential irrelevance of that question: “Costumes don’t define who we are. It’s characters.”

Forest Wallace seconds: “We have to show our characters through our actions, and the costumes are add-ons. The audience needs to know that you guys are cowboys with or without costumes.”

So, then, one of the Notre Dame students ventures, will they be performing the scene more or less as the Robinson Center actors have developed it for their play, just with an Old West twang?

All around the Robinson Center, located inside an old grocery store building about a quarter-mile south of campus, similar discussions unfold, the young owner-operators of this Shakespeare franchise introducing trainees from Notre Dame to their basic procedures.

Monica, Forest, Savannah and their college actors have ducked into an empty classroom to rehearse. Several other groups work in the center’s cacophonous multipurpose room. Immersed in their own scenes, they manage to tune out the surrounding noise from overlapping lines.

Ensemble member Zion Williams helps a college student mark the scansion on her script, marking the syllabic stresses that shape the rhythm of Shakespeare’s verse. Zion looks over her student’s penciled stab at it.

“That’s good!” she says, her ever-ebullient smile bursting. “Now say it like that!”

As they practice together, thumping their chests measure for measure, an exclamation comes from a different scene being staged a few feet away.

“A headless man! The garments of Posthumus!”

Everybody carries on, undisturbed. Across the room, company member Cameron Pierce employs another Burgess tactic, asking an actor to walk like his character, the sleazy, devious Iachimo. He shuffles, hunched, in shambolic loops like a player from an old-school electric football game.

“I like it,” Cameron says, the encouragement drawing the actor deeper into the role, heavier afoot, eyes darkening with ill intent.

When they move from the exercise to the scene itself, Cameron provides more specific guidance, looking for more deliberate turns as he recites his monologue.

“You’ve got to change direction,” she says.

“Can you give me an example?” the actor replies.

Cameron’s co-director for the scene, Andrew McDonald, demonstrates. He walks, stops, makes a quarter turn, then continues, pacing the lines in time to his steps.

“I want to see a full stop, then a turn,” Cameron says. “This isn’t just me being annoying, this is something Miss Christy does.”

When it comes to Shakespeare, Burgess is the source of everything the Robinson Center ensemble members do.

From women’s eyes this doctrine I derive

They are the books, the arts, the academes

That show, contain, and nourish all the world.

Cymbeline, the play the Robinson company will perform this summer in England, made Burgess fall in love with Shakespeare. She saw a 2001 production in Seattle that featured a “kabuki-Chinese-opera mix up” and a Marlboro Man blowing smoke rings, a mesmerizing east-meets-west memory so vivid that she has resisted staging her own Cymbeline until now. But the affinity for the Shakespeare canon, and her desire to share it, has only deepened over the years. 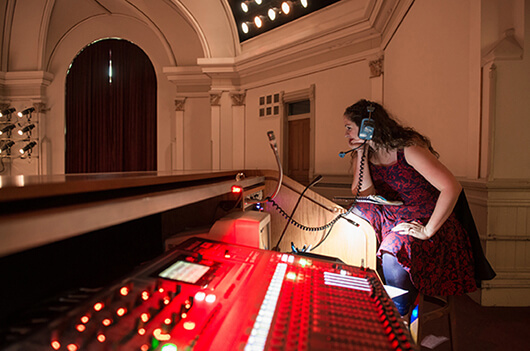 Burgess shares that feeling with her husband, Scott Jackson, the executive director of Shakespeare at Notre Dame. Their mutual affection for the plays has led to moments so nerdy that Jackson has wondered if maybe they should have boundaries. Like, let’s keep the obscure references to ourselves in front of the Robinson Center kids. Burgess insists they think it’s funny. “He’s like, ‘No, they don’t.’”

She should know, considering her experience casting a Shakespeare spell on young actors. Before coming to South Bend, Burgess was education manager for the Fairbanks Shakespeare Theater in her home state of Alaska. Her job there included leading workshops with children and Alaska Native Elders, a project that took her to remote places like the Pribilof Islands in the Bering Sea.

The events were designed as cultural exchanges, the elders sharing their history and knowledge of the landscape with the kids, who offered them a taste of Shakespeare in return. That approach speaks to Burgess’ belief in Shakespeare as a common language that can bridge every conceivable human boundary and reach people wherever they are — in their lives or on the planet.

She began the Robinson Shakespeare Company in much the same spirit. When Jackson took over Shakespeare at Notre Dame in 2008, Burgess sent her résumé around town. A local theater’s education director invited her along to a workshop at the Robinson Center.

There she met Velshonna Luckey, the center’s youth development program director. They were instantly thick as thieves and, in a bit of fortuitous timing, Luckey needed an assistant. That’s how Burgess started working at the Robinson Center, although her idea for the Shakespeare company itself met with skepticism.

The kids at the center, Burgess was told, would not respond to the esoteric challenge of performing Shakespeare. “And not by somebody who was being mean, but by somebody who thought that they were being helpful,” she says. “I was also told not to be disappointed when it failed.”

Burgess admits to feeling the slightest regret that in the moment she couldn’t keep her defiance to herself. In retrospect, though, her retort, uttered through a forced smile, makes for more dramatic dialogue: “Well, I look forward to proving you wrong.”

As the stage lights come up nearly decade later, the triumph of her vision seems almost inevitable. The Shakespeare ensemble has become one of the most visible points of pride at the Robinson Center, which administers a dozen youth and adult programs. At first, though, it was a struggle.

Burgess had no car so she cycled 80 miles a week in the summer of 2008, directing a dozen kids Luckey had recruited for a production of Macbeth. When a $1,200 grant from the local community foundation came through, they wept with relief. “Without that money,” Burgess says, “I don’t know what we would have done.”

And the students did not exactly possess a dormant Shakespearean urge just waiting to be unleashed. They needed convincing.

Had auditions been held for the role of Advocate — for Shakespeare, for the value of drama-based education, for the students — Burgess would have been cast. Her enthusiasm for the plays, and her confidence in the kids to perform them in all their undiluted rhyme and meter, went viral. The students started to see in themselves what Burgess saw in them.

“There is this honesty to it,” Luckey says. “Yes, she has this love for Shakespeare, but she also has a love for the children and for the families. And she helps them connect with their individual circumstances through the text.”

By the end of that first summer, when an audience of photo-snapping, tear-dabbing parents saw the final product, the Robinson Shakespeare Company occupied its own spotlight.

“Next thing you know, you had younger and younger children wanting to have that opportunity,” Luckey says. “And it caught like wildfire.”

Burgess, who has since earned a master’s degree in drama and theater education from the University of Warwick in England, is now the Robinson Center’s Shakespeare Outreach Director. That includes not only supervising the acting company, but developing a Shakespeare curriculum that she teaches in local schools, which consumes most of her working week during the academic year.

In that sense, the Robinson ensemble, for Burgess as well as the actors, is extracurricular. Her commitment to it, and to them, is not.

She expects them to show the same sense of responsibility to the group. Burgess has never doubted the ability of the young actors to conquer Shakespeare, but sometimes she needs to remind them of the dedication it takes.

While she relishes the double meaning of “play” as it applies to a theater ensemble — “It’s called a play,” she says, “because we’re playing” — there’s another connotation Burgess uses to silence students trying to squirm out of trouble for forgetting their lines or where they’re supposed to be on stage. As in, “Don’t even play.” 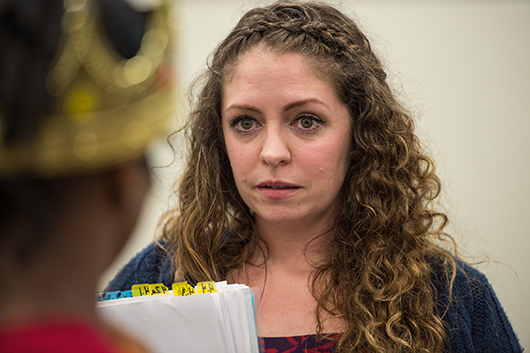 Often as not, she doesn’t need to say anything to communicate her expectations.

“She’ll give you this stare. You don’t know what to do. You’re just frozen,” ensemble member Josh Crudup says. “I think that’s Miss Christy, that stare.”

Precious Parker knows it well. She calls it “the look” and struggles not only to recreate it, but even to describe it. “Her eyes are so . . .” Precious says, words failing.

The expression carries such force because the students know Miss Christy’s expansive vision for the company, and for themselves, extends so far beyond the stage. Part counselor, part cajoler, and sometimes a little of both at the same time, Burgess also guides them through a process of character development in more ways than one.

The students rebel against the demands at times, but the truth is, they love her for it. And they hope she can see the emotion in their eyes as clearly as they can in hers.

“I wouldn’t have done anything I’m doing today without her. She is literally my whole heart. Sometimes I can just look at her and I wonder if she knows how much I really love her,” Precious says, words no longer failing, but feeling insufficient.