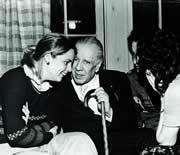 One evening during my freshman year at Notre Dame I emerged from my dorm room and for once did not wend like an arrow to the Knute Rockne Memorial Gymnasium, where I spent much of my time, nor to the South Dining Hall, where I spent much of my time, nor to any of my mysterious classes, one of which featured a man lecturing mostly in French about paleontology, a class I enjoyed though I spoke neither French nor paleontology, and another of which was a year-long seminar in William Faulkner with five students total, a course in which the five of us kept a surreptitious count of the number of times our professor began a sentence with the phrase Bill and I…

No, this evening, this soft and redolent Indiana evening, I walked into Washington Hall, a rickety lovely castle, which that evening was to host a writer from Argentina named Jorge Luis Borges. I was not then, at age 19, familiar with the work of Mr Borges, but I had accidentally read some of his stories in the library, someone kindly leaving his book open for me on a table and my attention being snagged like a jacket in a door. I had really liked the way he surfed along the razor edge between fiction and reporting, his scholarly tone somehow making the most amazing pronouncements possible, and I thought I might as well wander over, while he was on campus, and tell him that his work, or what I had read of it, was not bad, not bad at all, which is high praise coming from a teenager, it still seems to me.

Washington Hall then, and perhaps now, was sort of a welter of stairs and doors and odd corners, and as I had never been in the hall before I wasn’t totally sure where I was to go to meet Mr Borges, but I figured there wouldn’t be all that many people there, I mean, how many people are up to speed on scholarly Argentine fantasists, you know? So I stood by a side door, thinking that probably I would be able to pick Mr Borges out of a group of passersby, and maybe the poor guy would even be on his own, and not know where Washington Hall was, so maybe I could be of use, somehow — an idea that had not occurred to me before, probably ever. So when a small older man in an excellent natty dark suit appeared, accompanied by a helper student with his hand on the older man’s elbow, I assumed, correctly, that the dapper older man was Mr Borges, and I said hey, Mr. Borges, how’s it going?

Very well, he said, in crisp English, a plus, for I did not speak Argentine.

Many thanks, he said, peering up at me, and I realized he was blind. The student who was helping him looked annoyed and sort of seniorish, you know that supercilious look that senior English majors have, like they are very soon going to be Major Novelists and you are a slug in the path of their impending glory, and he, the senior helper student, took a step toward the door, looking particularly supercilious, but I sort of liked Mr Borges and didn’t see any reason to cut the conversation short, so I held my ground.

Well, sir, I don’t remember the titles, but there was a tiger on the cover of the book.

Ah, yes, tigers. Remarkable animals. Both alluring and terrifying at once.

The senior helper student pretty much had smoke coming out of his ears at this point for some reason, and he tried to angle me away from the door with his shoulder, but I have brothers so I know from shoulders, and I boxed him out, and told Mr Borges that I too was a writer, and someday I would write books too, and I would send him one or two, if he wanted. He said that would be very kind of me, and then he asked me a question I never forgot.

Why are you a writer? he said, very polite. He was a very courteous guy.

Get as close to the truth as you can, he said, which turned out to be the last thing he said to me, or me to him, because by now the senior helper student, who had been working hard on his footwork behind me, got the drop suddenly and backed me against the railing, and popped old Mr Borges through the door into the hall before Mr Borges could even get off a parting hey or anything. I didn’t get to say hey or thanks or good luck or anything to him either, which made me feel bad, because he was a really polite and courteous guy, and all in all you would think a blind older guy in a country not his own, accosted by a teenager who has read a few of his stories and cannot remember the titles, would not be quite so courteous, but he was, which I will always remember. Also get as close to the truth as you can seems like ever more excellent advice to me, so I share it with you, in memory of Mr Borges. He was a very courteous guy.

Brian Doyle is the editor of Portland Magazine at the University of Portland and the author most recently of a novel, Mink River. He received Notre Dame’s Father Robert Griffin, CSC, Award for Writing in 2010.