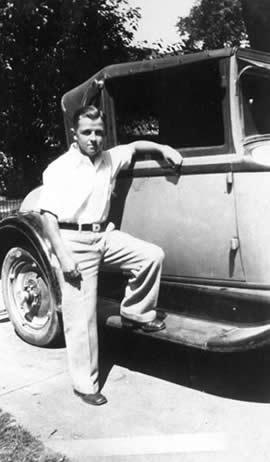 What a delight to see the “Plowed under, paved over” Echoes article by Thomas Schlereth ’63 in the Summer 2009 issue of Notre Dame Magazine. The material was particularly poignant because my father, Robert H. Gore Jr., was a graduate from the Department of Agriculture in 1931.

As the article notes, 1932 was the year Notre Dame terminated its bachelor’s degree program in agriculture. It is also correctly noted in the article that “no records” survived for the two year program. However, upon my dad’s passing, we sent to the archive office of Notre Dame his diploma, which was treasured by him and stored with his other valuable documents for his entire life.

Dad was particularly proud of the degree because, first, it came from Notre Dame, which he held in high esteem, and, second, because he believed he was the last student to graduate from that program. In fact he wasn’t — he was the third to last.

The family lore about Dad’s graduation was tableside conversation for the better part of the last 25 years of his life. He related how, as was typical, the audience was not to applaud until the last student from the university had received his diploma. When the Department of Agriculture was called, only one student stepped up onto the stage and that was Robert H. Gore Jr. At 5-feet-1, he looked more like a small child than a mature adult graduating from the University. One-by-one, audience members began to applaud until there was, in his words, “a thunderous round of applause and everybody came to their feet.”

My father remembered that the University announced, after he had taken his diploma on June 7, 1931, that it was the last one to be given. That was either an erroneous memory or a strong wish. We later discovered that there were two more graduates after my father’s graduation: Adrian Bower in August 1931, and Jose Zabarte in June ’32.

My father’s other stories about the program were truly a step back in time. He was strongly drawn to poultry farming and was, in fact, given an automobile to use by the University so he could drive around the county areas surrounding ND to advise the various poultry farmers on some of their problems. He held this job in high esteem. As he often remarked with humor, “I had to convince the farmers that this little guy really knew what he was talking about.”

On another occasion he was asked to inspect the teeth of the draft horses used by the university. These were monstrous horses, and my imagination calls to mind a Clydesdale. When the teacher brought the horse’s head down for my father to check the teeth, and Dad took hold of the halter, the horse’s head immediately lifted back up. My dad, who topped the scale at about 105 pounds, was lifted off the ground and hung dangling from the horse’s nose until other people came to take charge of the situation.

My father also recalled monitoring the poultry house which, at that time, supplied the chicken and egg needs not only for Notre Dame but also for Saint Mary’s. The fact of the eggs going to Saint Mary’s was unknown to Notre Dame, as Dad would pilfer them from the hen house and he and fellow classmate Yvo Thomas Oester would sneak to the college. The two of them would knock at a window entrance to one of the halls at Saint Mary’s, where the girls who were part of the plot would let them in. The group would then scramble, fry or hardboil the eggs and feast upon benefice from Notre Dame.

I suppose there is a fair amount of moral guilt for the adventure, but my father always allocated it to the department of student pranks. As he would say, “God always smiles on student pranks.”

Despite the fact that my father’s college of graduation quietly slipped into oblivion, he was a strong supporter of the University. He orchestrated the first state-wide Notre Dame convention in Fort Lauderdale, Florida. He then topped that by organizing the first international Notre Dame convention in the Bahamas. He was Notre Dame’s “Man of the Year” for several years, served on the advisory board for the College of Commerce, donated a valuable and cherished rare coin collection to Notre Dame and was a frequent participant in all of the fund drives. He was the honored speaker at the dedication of the R.H. Gore Sr., Faculty Club in 1964 (now demolished) and a close friend of Fathers Hesburgh and Joyce.

Our family is only sorry that he did not live to see this wonderful article. It would have brought back cherished memories and probably released a few more stories hidden in his mind. He died at the age of 93, and in his later years his storytelling got to be quite astounding and borderline unbelievable.

One story that he loved to repeat and that we always doubted the veracity of concerned a Notre Dame-Southern Cal game. The halftime show consisted of a fake Notre Dame team playing a fake Southern Cal team. Notre Dame had the ball on the 1-inch line and, after three attempts, couldn’t make a touchdown. The announcer then announced that Robert H. Gore Jr. was coming onto the field to play in the halfback position.

You can imagine the roars of laughter when this tiny little man ran out holding up his pants, since the only uniform they could get was far too big for him. The game plan called for him to be given the ball and then the quarterback and other fullbacks would throw him into the end zone. The comedic play worked but the players held onto the pant legs too long. As a result my father came out of the uniform and landed in his shorts into the end zone, making the touchdown. Not to be dismayed by this unseemly adventure, he pranced around in the end zone holding the football up. It was a side-splitting story.

What puzzled us about the story was that Dad always said he walked home after the game. His parent’s home was in Oak Park, Illinois, and it didn’t make much sense that he would walk there from South Bend, Indiana.

Years later, when we finally accessed a yearbook, it turned out that in this particular year Notre Dame played Southern Cal at Soldier Field in downtown Chicago. My father recollection of Notre Dame was priceless and accurate.

As the late Walter Winchel would say, “and there is the rest of the story.”

Photo of Robert H. Gore, Jr., with the car he used to make visits to poultry farms around ND. He sat upon two cushions to see over the dashboard.