Nandi Mgwaba has a sore neck.

Probably she just slept on it funny, but it could be the pace she’s set since the aspiring playwright and touch-rugby player from Johannesburg arrived for orientation last summer. 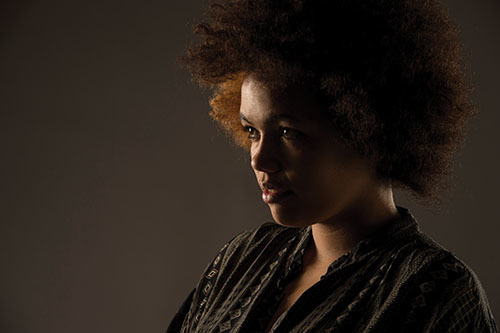 Try to keep stride: Mgwaba made her student acting debut in October, danced on a DeBartolo stage with a professional company in January and performed in both the Show Some Skin and Loyal Daughters & Sons monologue shows in February and March.

Just yesterday, the last day of class, she and her classmates gave life to her first serious writing effort at Notre Dame, Fire from the Sky, a 20-minute play about the radicalization of an Iraqi boy growing up during the American occupation of his country.

Mgwaba wrote the piece for Documentary Theatre: Writing and Performance, a course taught by Film, Television & Theatre professors Anton Juan and Anne García-Romero. She says the course taught her how much she loves the stage. “It was better than coffee, which is saying a lot for me,” she jokes.

Making the theater her home is nothing new for Mgwaba, a Zulu who acted out South African “soapies” as a child and says she likely married all of her sister’s friends through playacting. The endings weren’t always happy. “So, someone marries, but then there’s deceit! Ah, what do we do?”

Avid theatergoers, her parents took her to shows at Johannesburg’s Market Theatre and to the massive National Arts Festival in Grahamstown, South Africa. Then just before attending the African Leadership Academy, Mgwaba tried her hand at directing. It was a low-energy “disaster,” she says with a sly smile, but it taught her a lesson.

“Art is a lot like leadership,” she says. Whether you’re motivating actors or making subtle decisions about whether a symbolic rose is red or yellow, “You need to have a vision for what your work wants to do.”

Mgwaba’s vision involves breaking stereotypes, particularly those the world tends to hold about Africa as a culturally unified and impoverished “country.” She isn’t sure yet whether Notre Dame fits her penchant for political activism. But it can nurture her enthusiasm for African history, especially ancient civilizations, and literature, particularly science-fiction and post-apocalyptic novels. There she finds inspiration for the kind of social commentary she wants to offer through her plays.

Theater’s collaborative nature makes it an attractive medium for channeling such hopes — surely something any Domer could understand. As Mgwaba says, “You can’t change anything by yourself.”