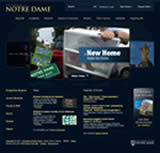 Visitors to the University’s website home page on the morning of August 28 didn’t find the familiar navigation menus, plain white background and images of campus they’ve seen since that basic lineup was first formulated in 1997. Instead, they were greeted by . . . the smiling face of chemistry Professor Olaf Wiest?

Wiest’s trailblazing research on skin-cancer prevention inaugurated the launch of the completely redesigned nd.edu, which provided the Notre Dame community and first-time visitors with intriguing options: Watch the video on Wiest’s work and from there dive into the scientific frontiers being explored at Notre Dame, or click on one of the shadowy, smaller screens tucked just behind his to see what they were about.

That click rotated to a welcome message from University president Father John Jenkins, CSC, and student body president Liz Brown. Another brought forward a short film on Summer Shakespeare. Yet another foregrounded information on the new Eddy Street Commons development, and so on to several other timely messages and stories.

This interactive carousel of scholarship, prayer and community life at Notre Dame, evocative of a spinning series of back-lit and animated stained glass windows, constitutes a unique approach to web presence in higher education. It was made possible by new technologies that supported the creation of the carousel’s screens, which function like miniature websites, and streamlined the video delivery process, bringing the huge files to site users quickly.

“The challenge for a university of any size is to build a website that can distribute a complex list of content,” says Matthew Klawitter, the director of the University’s web group. “It’s almost impossible to organize information in a way that makes any sense.” Conventional approaches leave web design teams trying to incorporate everything, which can result in something like a “pretty, shiny phone book.” He and his team, working closely with the University’s media group in the Office of Public Affairs and Communications, weren’t content to do that.

Early in the year-long redevelopment process, Klawitter says, the team recognized that the University already had a well-established identity as a place of exceptional scholarship and strong faith, a vibrant community with a commitment to social justice. What was needed was a dynamic vehicle that would carry the message beyond campus.

From that point, the working concept was to immerse visitors in Notre Dame, giving each of the University’s constituencies—alumni and prospective and current students, parents, faculty and staff—as complete and experiential a picture as possible of what’s happening on campus. Those audiences will find similar carousels targeted to their interests on their sub-pages, which are linked from the home page. In each case, the carousel screens are meant to lead website visitors to more information about people, departments, initiatives and events at Notre Dame that correspond to their interests. New videos and information packages will be posted regularly while Klawitter’s team incorporates feedback and explores possible additional features.

“We want to have visitors see Notre Dame the way Notre Dame really is, to see it as a deeply special and layered place. The carousel is a metaphor for that layered-ness,” Klawitter says.

Klawitter is also excited about the site’s Google-powered search engine and its fresh organization of tools and information, which includes extensive “Help Center” and “Popular Sites” features at the top of the page. New section tabs that spotlight “Campus & Community,” “Faith & Service” and “Leadership” give ND neophytes an up-front sense of how the campus views itself.

The redesign and reconstruction effort was conceived, created and executed in-house at a fraction of what it would have cost to outsource the work to a professional web development company. Ripple Effects Interactive, a Pennsylvania-based company, supported the initial research phase, which included surveys and focus groups among various site users. Klawitter likens the end result to trading in an old Hyundai for a 2008 Mercedes—without the financial pain.

His staff, he says, is itself a fraction of the size of similar units at peer universities, and he expects the new nd.edu to change the way other schools present themselves on the Internet.

“Notre Dame is trying to be a leader in everything we do,” says Todd Woodward ‘93, the University’s associate vice president for public affairs and communications. He believes the site’s real test will be whether alumni feel it represents their experience while it reaches out to potential new members of the Notre Dame family.

“In the end, this isn’t about the technology,” Klawitter says. “This is a privilege, and we’re committed to using our position and expertise in the greater effort to continue making Notre Dame a better place.”