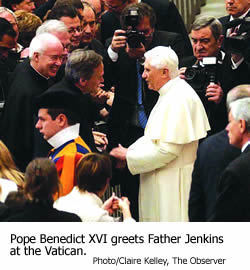 A meeting between Pope Benedict XVI and University President Father John Jenkins, CSC, highlighted the week-long February 2006 Board of Trustees meetings in Rome.

The pope descended the stairs of the Vatican auditorium stage after his February 1 papal address to greet Jenkins, who was seated dead center in the front row of the audience.

“I asked him, ‘Keep us in your prayers,’” Jenkins said, recounting the conversation for this reporter, who was covering events in Rome for Notre Dame’s the student newspaper, The Observer.

“What you saw there . . . was prayerful, respectful,” Ebey said. “He focuses on you. He looks at you and talks to you. . . . He knew who Father Jenkins was and greeted him.”

The meeting lasted only about 30 seconds, but its significance projected the moment into the larger history of important events for the University.

Jenkins described the entire trip as a “pilgrimage.” “You can’t walk around Rome without being struck by the layers of history,” he said. “To be Catholic, as someone said, is to be Catholic in space—that means you’re connected with people throughout the world—but also in time, a tradition that runs through centuries. I think at a personal and spiritual level, to become more deeply aware of that, is beneficial to us.”

During the trip—which ran from January 29 to February 3—Jenkins and University officers and trustees met with numerous Vatican leaders, including Archbishop William Levada, prefect of the Congregation for the Doctrine of the Faith; Cardinal Renato Raffaele Martino, president of the Pontifical Council for Justice and the Peace; and Cardinal Francis Arinze, prefect of the Congregation for Divine Worship.

Jenkins said he hoped the trip would deepen the faith of the officers and trustees and plant Notre Dame in the context of worldwide Catholicism. “I see our trip here as connecting each of us with the mission of the universal Church . . . [and] we have become conscious of that, we understand our role in the universal Church.”

That role was the focus of the academic conference and convocation February 1. Jenkins, Rino Fisichella, auxiliary bishop of Rome, and Daniel Jenky, CSC, Notre Dame trustee and bishop of Peoria, Illinois, spoke on the “Contribution of Catholic Universities to the Church and Culture.”

Just one week earlier, Jenkins delivered three addresses at Notre Dame on the interplay between academic freedom and Catholic character. At the conference, he discussed a related subject—"Notre Dame: A Catholic University within American Academe."

For this mission, Jenkins said, Catholic universities should take a Thomas Aquinas-style approach to the discussion, first seriously considering the contrary voices then attempting to resolve the issue “in the best way one can in the light of Christian faith and revelation.”

It’s important “to try to address and respond to questions and contrary views in a manner that will speak to and help persuade others,” he said.

Fisichella spoke on the importance of training students in Catholic universities to be “scientifically competent and fully professional.”

“Our universities are called to bring about . . . an intelligent search for the truth and its existence,” he said.

Jenky delved into the history of Holy Cross schools and Congregation founder Basil Anthony Moreau and said Catholic schools were in a unique position to contribute to the world. “The world today doesn’t need more private schools. There are plenty of them out there,” he said. “But both the world and the Church need more Catholic schools that remember their reason for existing.”

At the end of the conference, Provost Thomas Burish awarded honorary degrees to Fisichella and U.S. Ambassador to the Holy See Frances Rooney III.