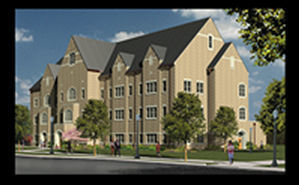 This artist’s rendering shows the new campus post office and headquarters for Security/Police, which is being built on the former basketball courts in front of Stepan Center.

The three-story, $8.6 million building was designed by Moake Park Group of Fort Wayne, Indiana, in the collegiate gothic style of the Eck Center and Coleman-Morse Center. The post office will be on the first floor.

Scheduled for completion in late summer 2003, the building is needed because the current post office sits on land earmarked for a planned expansion of the Law School, and because a new hotel, the Notre Dame Inn, will be built on the site of the existing police station. The banging heard around campus all summer came from the driving of 165 steel piles into the soil at the site of the new building, which is too soft to support a conventional foundation.

Summer is always a busy season for campus construction, but 2002 was especially hectic as many roads and parking lots were closed temporarily to permit the laying of utility lines to the new buildings. Starting with those closest to completion, here are the other buildings in progress and their scheduled completion dates: a two-story addition to Stepan Chemistry Hall (November 1); the Marie P. DeBartolo Center for the Performing Arts (August 2004); the Science Learning Center, next to the Joyce Center and in front of the Rolfs Sports Recreation Center (August 2005); the Notre Dame Inn (2005). No timetable has been set for the Law School addition