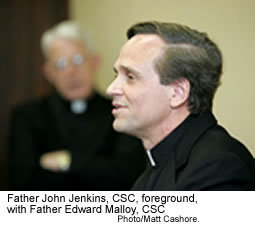 Notre Dame will have a new president a year from now.

At their regular quarterly meeting in late April, the University’s trustees elected Father John I. Jenkins, CSC, to succeed Father Edward A. Malloy, CSC, who has been president since 1987.

The announcement came a day after Malloy formally informed the board of his decision to step down when his current term expires on June 30, 2005. Jenkins, 50, was given a five-year appointment that will begin as soon as Malloy leaves office.

Ordained in 1983, Jenkins is a scholar of philosophy who holds five college degrees. Two are from Notre Dame: a 1976 bachelor’s and a ‘78 master’s degree. He also holds a doctorate in philosophy from fabled Oxford University. He joined the faculty in 1990 and has served as vice president and associate provost since 2000. He is also an associate professor of philosophy.

Jenkins is set to become Notre Dame’s 17th president but only the third in 53 years. Malloy, 63, succeeded Father Hesburgh when Hesburgh retired after 35 years in office. Jenkins was born a year and a half after Hesburgh became president in 1952.

At a news conference announcing Jenkins’ appointment, the president-elect said, “It’s a tremendous honor and at the same time a daunting challenge.”

Malloy said he was “delighted” with the choice and “absolutely confident that the University will be in good hands.”

Board Chair Patrick McCartan ‘56, ’59J.D. did not appear at the news conference but in a press release said of Jenkins: “The superb academic credentials he brings to the leadership of Notre Dame at this time in its history will be of critical importance to the realization of our aspiration to become one of the great research universities of the world with a distinctly Catholic character.”

The announcement of Jenkins’ appointment came as a surprise for two reasons: The board was not expected to name a successor to Malloy so soon, and Jenkins was not the most well-known of the rumored candidates.

According to the University’s bylaws, the president must be a priest of the Indiana Province of the Congregation of Holy Cross. That limited the field of likely candidates to a handful with experience in higher levels of university administration.

In an article published in The Observer one week before the board’s meeting, Malloy had said he was open to remaining president beyond next year if the trustees wished.

At the news conference, the departing president talked of having undertaken a lengthy process of what he termed “discernment” in which he prayed and sought advice from “a variety of individuals.” He said that in the two weeks leading up to the trustees meeting he had become more and more convinced that the time was right to prepare for a transition.

“It ultimately was my decision,” he stated.

Malloy said that when he informed the board of his decision, that activated a process agreed upon beforehand by the trustees as to how his successor would be selected. Contacted a few days after the meeting, board chair McCartan said Malloy told the board’s governance and nominating committee last fall that it was always his expectation that he would step down at the end of his current term.

In January, McCartan explained, a committee of trustees was given charge to begin the nomination process, and in February they began consulting representatives of the religious order, deans, the Academic Council and others. The trustees formally interviewed an undisclosed number of candidates on the first day of the April meeting. They announced their choice the next morning.

Reflecting on Malloy’s tenure, McCartan said in the press release: “All one needs to do is to tour our campus, consult the rankings, examine the credentials of our faculty and the outstanding qualifications of our student body to realize what he has accomplished for Notre Dame. He leaves a truly remarkable record and legacy.”

Jenkins said he intends to follow the path marked out by the University’s latest strategic plan, Notre Dame 2010: Fulfilling the Promise, written by Malloy and approved by the board at the April meeting.

Malloy said he plans to take a year’s sabbatical after stepping down but that he will remain at Notre Dame in the long term. With one book awaiting publication and another mostly complete, he said he looks forward to continuing to write as well as teach and engage in pastoral ministry. He said he would like to follow the example of his predecessor, Hesburgh, who turned 87 in May but remains active in many efforts. As Hesburgh has done, Malloy serves on the boards of more than a dozen not-for-profit organizations.

On the same day Jenkins was named president-elect, the trustees voted to fill the vacant executive vice president’s position— third-highest administrative post after president and provost —with Jenkins’ fellow vice president and associate provost, John Affleck-Graves. The 53-year-old native of South Africa, a naturalized U.S. citizen, also holds the Notre Dame Chair in Finance in the college of business. He becomes the first layperson to hold the post, which had been vacant since Father Tim Scully, CSC, ‘76, ’79M.Div., stepped down last year to return to teaching.

In what will be remembered as a poignant moment, Affleck-Graves mentioned at the press conference that he had been fortunate to know all four of Notre Dame’s previous executive vice presidents. Hesburgh was first followed by Father Edmund P. Joyce, CSC, ‘37, who served in the chief lieutenant’s position for all 35 years of the Hesburgh presidency. Joyce suffered a stroke in 2002 and was in failing health at the time of the trustees meeting.

Affleck-Graves began by mentioning that Joyce was not well. He then said the elderly priest had set the standard for the position by being disciplined, hard-working and visionary. He said he would try to live up to that standard.

Two days later Joyce passed away at the age of 87.