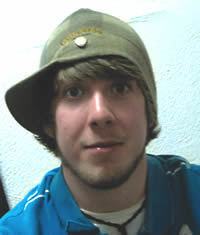 Declan Drumm Sullivan was born May 26, 1990, in Chicago. He was a Notre Dame junior. He lived in 443 Fisher Hall. Shane Steinberg was a roommate and last spring they played on a Bookstore Basketball team, “The Blouses.” They both worked at The Observer. A few days after Declan Sullivan was killed Steinberg wrote, “Declan was a soul wild at heart. . . . an individual who struck the perfect balance between being fun-loving and constantly driven.”

Declan Sullivan was by all accounts enthusiastic. He had lots of energy, lots of friends. He was quick witted and full of joy . . . genuine, fully himself, the kind of guy who enlivened a room. Some said he had a goofy persona, a ridiculous laugh, that he greeted friends with hugs. “It was hard to hang out with him and not just love the life you were living,” fellow reporter Mary Claire O’Donnell wrote soon after his death. Chris Hine ’09, last year’s Observer editor, wrote: “I’ll miss Declan’s carefree attitude, the way he badly danced like no one was watching him and singing off-key at the top of his lungs like no one was listening.”

At Carmel Catholic High School in Mundelein, Illinois, Sullivan played in the jazz, marching and concert bands. A guidance counselor there, Christine Hartnett, remembered him as “awesome, friendly, hilarious, brilliant.” When he graduated, he gave her flowers and a handwritten note.

Sullivan was a double-major at Notre Dame — marketing plus film, television and theatre. He wrote about music and the movies for The Observer. He had a reputation for interviewing the artists who might intimidate others, and producing articles with creative twists. He got a kick out of playfully slipping swear words into stories he turned in.

He loved the movies. He had 500 films in his Netflix Instant Queue. He was heading toward a career in filmmaking. He might recite favorite lines from favorite movies, like this one from American Beauty: “There is nothing worse than being ordinary.” He was planning to study in China spring semester. He loved Notre Dame football, and he loved videotaping football practices for the Athletic Department.

That’s what he was doing on October 27, 2010, an extraordinarily windy day (the National Weather Service recorded wind gusts at 50 miles per hour) when the hydraulic scissor lift, from which he was filming practice, keeled over at 4:50 p.m., taking his life and bringing on every parent’s worst nightmare — to be preceded in death by a son or daughter.

Word of the fatal accident spread across campus. Observer editors gathered in their offices, not yet knowing the name of the deceased but soon suspecting it might be one of their own as clues added up. Other students gravitated to the Grotto — at first dozens, then maybe hundreds.

“That night we all needed something different,” junior Tara Hunt would later write about being drawn to the Grotto and finding there “communal grief and unity,” recalling, “The ones who knew him sat on the benches and sobbed, the ones who didn’t know him hung back. Some joined hands and recited prayers, others just stood and watched — perhaps praying or thinking, or perhaps just appreciating having others close by.

“The Grotto was a safe haven that night. It was a place to feel whatever you were feeling. We felt grief for Declan’s friends and family. We felt the remorse of the University. We felt the mortality of our own 20-year-old lives.”

Later that night some 200 students attended Mass in Fisher Hall, then headed to the Grotto where they recited the rosary and told Declan Sullivan stories before returning to Fisher. There a band of brothers listened to the music of Passion Pit and Owl City, two of Sullivan’s favorite groups, before heading back to the Grotto at 4 a.m. They rearranged candles to spell “Dec.”

The following night the Basilica of the Sacred Heart was filled to capacity with 1,000 mourners, including the football team and Declan’s family from Long Grove, Illinois — his parents, Barry and Alison; younger brother, Mac, a high school sophomore, and his sister, Wyn, a Notre Dame freshman living in Lewis Hall. Fisher residents celebrated their lost mate by wearing lime green dorm sunglasses. Some 1,000 students hovered just outside in the cold autumn night.

Other rituals and remembrances would come in the days following — the dedication of the Notre Dame-Tulsa football game three days after the tragedy, a wake in Lake Zurich, Illinois, and a funeral Mass at Saint Mary Catholic Church in Buffalo Grove.

The solace that came from such prayer and communal grief could dull but not diminish the pain felt across campus — a campus stunned and somber, agonizing over a fallen student whose shocking absence became a close, pervasive presence. Notre Dame, an institution that prides itself on the care and protection given its students, had dealt with death before, but not like this. And the place — from office to classroom to residence hall and across the quads — was reeling from the blow.

The tragedy became a national story. Sportswriters, columnists, TV commentators and others questioned why Sullivan was up there that afternoon.

The University promised an investigation, and on November 5, University President Rev. John I. Jenkins, CSC, announced that the former president of the University of Arizona, Peter Likins, would head an “external review” that would be “thorough, unbiased and accurate.”

The communiqué also stated, “Declan Sullivan was entrusted to our care, and we failed to keep him safe. We at Notre Dame — and ultimately I, as president — are responsible.”

Jenkins continued, “Words cannot express our sorrow to the Sullivan family,” adding, “Yet the Sullivan family, through their incredible grace and courage, has given us support and an example of how to respond. They ministered to us as we tried to minister to them.”

Alison and Barry Sullivan had issued a statement three days after their son’s death. It read in part: “Declan loved Notre Dame. The grief we feel is tempered by the knowledge that Dec was doing what he loved in the place he most wanted to be.” The Sullivans expressed gratitude to those helping them cope, acknowledged that Declan “leaves this world a better place for having been here,” and asked “respect for our privacy as we come to terms with our loss.”

Despite its brevity, their son’s lost life had been anything but ordinary.