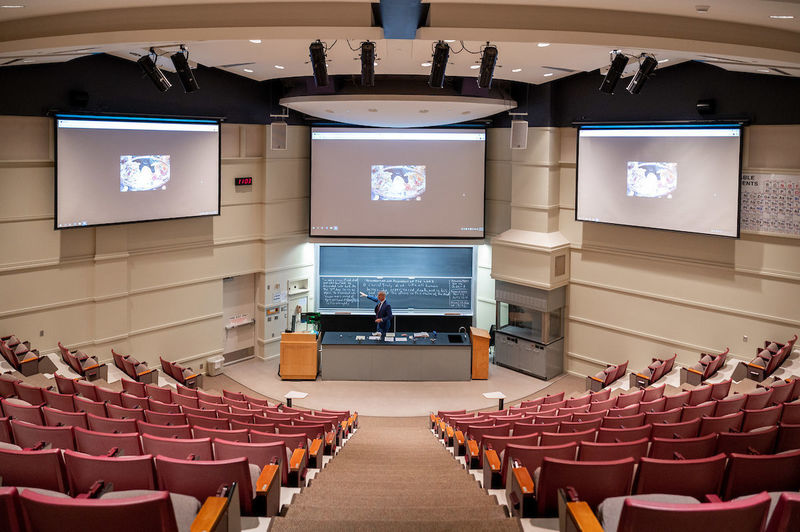 Theology professor John Cavadini records one of his classes in a vacant DeBartolo Hall. Photo by Matt Cashore ’94

Michael Chamberlain ’20 carried all his belongings out of O’Neill Hall on March 16 and packed them into his car. A California resident, the Notre Dame senior planned to drive to Houston and stay with his brother for the near future.

“I was ready to leave, but I wasn’t ready to leave this soon,” Chamberlain said, noting that the final months of senior year are a memorable time, but the Class of 2020 would be forced to forego many traditional senior rituals.

Spring 2020 was a semester unlike any other in Notre Dame’s history. Students left for spring break expecting to return in a week for the second half of the semester and the promise of spring weather and campus activities. Suddenly, before they knew it, daily life was upended.

In February, as the coronavirus spread through Italy, the University halted its study programs in Rome and flew students home to the United States. In early March, the University recalled all students studying abroad and suspended its international programs until further notice. The change impacted 483 students who had been overseas.

Notre Dame announced March 11 that all in-person classes were suspended, joining colleges across the country that did the same. The University extended spring break an additional week, then resumed classes entirely via online instruction for the rest of the semester.

A modern pandemic is uncharted territory for Notre Dame and other universities. Administrators have no playbook for how to proceed.

Faculty members accustomed to teaching in lecture halls got quick training on how to transition to online instruction. In a concession to the unusual circumstances, undergraduates were given the option — after seeing their grade for each course for the spring semester — of choosing either to receive the letter grade or take a pass/no credit for that course.

One would have to go back to World War II, when most of the campus was transformed into a U.S. Navy training facility, to find such a major disturbance to University routine. Between 1942 and 1946, when the undergraduate population was reduced to a few hundred students, some 11,925 men completed their officer training at Notre Dame before entering military service.

To prevent spread of the virus, faculty and nonessential staff members were told to work from their homes starting in mid-March. Some students returned briefly to campus after spring break to collect some of their belongings from their residence halls. For those who requested it, the University gathered and shipped laptops, textbooks and other academic materials to students’ homes. And a total of 127 students, including international students who could not return home, were provided housing on campus.

After in-person classes halted, second-year law student Kaitlyn Wallace moved back to Kansas City, Missouri. She lived at home with her parents and younger brother and sister, participating in classes online from her bedroom.

“I think I was really fortunate. My parents have good Wi-Fi,” Wallace says. “Everyone in the family knew my class schedule. They wouldn’t bother me during class time.” The family sheltered at home and stayed well, venturing out only for walks and trips to the grocery store.

Wallace says online classes went more smoothly than she expected, with professors and students adapting quickly. “It was really pretty seamless,” she says. She kept in touch with law school friends via daily phone calls and continued to pay rent on her South Bend apartment.

Wallace was looking forward to a job as a summer associate at a Chicago law firm. Although many students found their summer positions canceled because of the pandemic, hers was not. However, because of the coronavirus, the job became virtual, with Wallace working for the firm online from a Chicago apartment rather than in the office.

She is hoping Notre Dame can adhere to plans to resume in-person classes in August that the University’s president, Rev. John I. Jenkins, CSC, ’76, ’78M.A., announced in May. “I would much prefer the classes be in-person, but I don’t want there to be a COVID-19 outbreak in South Bend,” she says. She feels University leaders have done a good job through the coronavirus crisis, and she trusts them to make the right decision about fall classes. “They’ve been really transparent about all the decisions they’ve had to make.”

No celebrations marked St. Patrick’s Day. The Blue-Gold football game and all other spring sports events were canceled. DeBartolo Performing Arts Center cut short the remainder of its spring season. Corridor walls in campus classroom buildings were covered with flyers about lectures and arts events that would never happen. Fewer candles burned in the Grotto.

In accordance with a decision by Indiana’s Catholic bishops, all public Masses in the Basilica of the Sacred Heart and elsewhere on campus were suspended from mid-March until late May. For probably the first time in Notre Dame history, there was no public Mass on Easter Sunday. Masses continued to be celebrated in the basilica and were livestreamed online.

By late March, in an unprecedented move, the University suspended laboratory research operations across campus, the only exception being for coronavirus-related research. The hibernation included more than 300 laboratories, most in science and engineering.

Donny Hanjaya-Putra ’07, an assistant professor of aerospace and mechanical engineering, studies stem cells and molecular therapies. His lab, which includes one graduate student and two postdoctoral researchers, was among those closed.

He says he understood the need for the hibernation, but worried about how it would impact the careers of those in his lab. “The most precious resource we have is time. For grad students and postdocs, time is critical for them,” Hanjaya-Putra says. For some students, the shutdown might mean a delay in their coursework and postponement of graduation.

While hibernation will cause delays for some research, the COVID-19 crisis likely will point to expanded research paths for academics, says Robert Bernhard, Notre Dame’s vice president for research. “There will be infectious disease research opportunities,” he says.

As spring progressed, thousands of tulips and other spring flowers were in full bloom, but few people were around to see them. Wearing face masks and practicing social distancing, construction workers continued their labors on the new Corby Hall, a new residence hall and the McKen-na Hall replacement. Based on the international economic downturn and financial uncertainty, future construction projects were placed on hold.

Notre Dame instituted a staff hiring and wage freeze, but continued to pay and provide benefits to all full-time and benefits-eligible part-time regular employees. The University refunded undergraduates $20 million in room and board for the portion of the spring semester they were not on campus. Administrators further barred nonessential expenses, including business travel, for the foreseeable future.

The University established a Student Emergency Relief Fund with donations from senior campus administrators and other private gifts. The fund will assist students whose families face unemployment and other hardships caused by the pandemic.

Meanwhile, some members of the Notre Dame community tested positive for COVID-19, the University announced on its coronavirus response web page. To protect privacy, no numbers or details were released.

The commencement ceremony set for May 17 in Notre Dame Stadium was canceled. Instead, the University held a virtual online degree ceremony on that day, and plans a full, in-person Class of 2020 commencement on Memorial Day weekend 2021.

During the virtual ceremony, Father Jenkins formally conferred degrees on the graduates. In his charge to the class, Jenkins made reference to the “Greatest Generation,” as Americans who grew up during the Great Depression and helped win World War II have come to be known. “What set them up for greatness was the adversity in which they were reared and the challenges that shaped them,” he said.

Hardship has a way of bringing out what is highest and best in all, Jenkins told the graduates. The story of the Class of 2020 will include the massive social, economic and public health challenges that are now facing the world.

“I’m sorry for these hardships, but they are your opportunity,” he said. “You see, you cannot be the Fighting Irish if you never had to fight through anything. You have your fight. Seize it.”

In advance of the ceremony, all graduates received commemorative boxes from the University containing a letter from Jenkins, a graduation stole, a candle and a copy of the 2020 Dome, the campus yearbook.

A virtual commissioning ceremony for Notre Dame’s 2020 ROTC graduates was livestreamed the same weekend. One by one, the graduates took their commissioning oath online. Many participated from their homes, often joined by close family.

Summer classes, at least through July 6, were online-only. Reunion weekend, traditionally the first weekend in June, was canceled, with plans to reschedule it in the future. And the various conferences, programs and camps that usually make campus a busy place even in summer were shuttered.

Notre Dame’s leaders have been consulting with experts from Johns Hopkins and the Cleveland Clinic, as well as the St. Joseph County Health Department, to prepare for comprehensive COVID-19 testing, contact tracing, quarantining and isolation space for those infected when in-person classes resume.

The plan — for students, faculty and staff — will include social distancing, mask requirements and extensive cleaning of campus spaces. Faculty have been asked to prepare courses for both in-    person and remote instruction, which would allow any student in isolation or quarantine to continue to participate.

Patrick Paulsen ’20 spent the spring living in a house in South Bend with nine other seniors, staying mostly to themselves and focusing on their online classes. As the weather warmed, they invited other friends to visit them outdoors, where they could keep their distance.

While Senior Week activities were canceled, the group organized its own informal “Champagne on the Steps,” a tradition of toasts on the front steps of the Main Building. There were no caps and gowns this year, but the housemates were going to watch their virtual commencement together at their house. Paulsen says they made a day of it.

The week after the virtual commencement, Paulsen and his girlfriend planned to drive home to the Pacific Northwest. He’s from Seattle, and she’s from Portland. The idea was to fill the car “Grapes of Wrath style, and head west,” he says.

Prior to the pandemic, Paulsen’s postcollege plan was to work for a couple years and then apply to law school. With the world economy battered and the U.S. unemployment rate at 14.7 percent by May, he realized full-time job openings would be rare. Paulsen plans to live with his parents at home in Seattle, seek a part-time job and study for the LSAT.

Paulsen and his friends already are looking forward to reuniting next May to celebrate their commencement. The housemates took time this spring to talk about the impact of the pandemic and the abrupt shift in their world. They know it will have a lasting impact on their lives, he says. “This is a once-in-a-hundred-years kind of thing.”

Margaret Fosmoe is an associate editor of this magazine