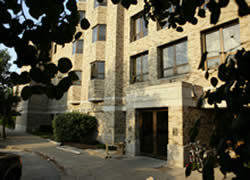 Male/Female: Female until 1997; male since

They Call Themselves: The Juggerknotts or the “Juggs” for short. The men of the hall first petitioned to be dubbed the “Beavers,” but the administration rejected that request for the preferred—and pithier—Juggerknotts. Their colors are a bold orange and navy blue; at home football games the Juggs don orange beanies. When Knott was a women’s hall, residents called themselves the Knott Angels. Fittingly, their mascot was an angel with a devilish grin who carried a pitchfork but was graced with a halo.

Named For: Marion Burk Knott, at the behest of her husband, Henry J. Knott. Mr. Knott, owner of a Baltimore construction and real-estate development company, donated funds to such Catholic institutions as Saint Mary’s Seminary and University and Calvert Hall College High School in Baltimore, and, of course, Notre Dame. The University granted him an honorary degree in 1986. He died in 1995 at age 89; Marion died in 2003 at age 92.

Distinguishing Features: In the not-so-distant past, the Marion Burk Knott portrait in the dorm’s lobby supposedly accompanied the spirited Juggs to their respective activities—campus events, social gatherings and even off-campus adventures. Sadly, the Juggs’ enthusiasm for their hall had to find another outlet; the portrait was bolted to the wall to ensure its preservation for generations to come.

History Made There: Knott Hall is the first dorm to be named for a woman and one of only two halls to switch its population from female to male. In spring 2007, the residence hall celebrated its 10th year as a men’s dorm.

They Lived There: Football players Rocky Boiman ’02 and Tom Zbikowski ’07. Junior Emerson Spartz, the creator of the No. 1 Harry Potter fan website, mugglenet.com, is a current resident.

Lore: Cloaked in ambiguity, Knott’s Tradition Night is the most momentous event of Freshmen Orientation. Only Knott Hall men are privy to all that is Tradition Night, which involves one activity during which “the Juggerknotts visit the place of their origin.” Outsiders do know that each freshman walks away with his very own orange beanie. He clutches it tightly, though: Great shame is promised to anyone who loses it.

Traditions: The hall’s signature event is Knott on the Knoll. April 2001 marked the beginning of this tradition, during which, for one weekend, the familiar hillock between Knott Hall and Hesburgh Library features concerts performed by regional or campus bands. Hosting for the entire campus, the men also leave room in the set for comedy acts—and thus shake off their end-of-the-semester stress. Donations, a raffle and T-shirt sales raise funds for the dorm’s charity, Habitat for Humanity.

To further curb academic anxiety, Knott Hall rector Brother Jerome “BroJo” Meyer, CSC, has instituted his own tradition for the men of the residence: chili nights. It is said that he begins cutting tomatoes at 8 a.m. and serves his chili, a top-secret recipe, around 11 p.m. Guaranteed for one night of finals—but bound to happen on one or two other randomly selected evenings—Brother Jerome’s chili nights are a favorite.

The Juggerknotts also host a three-on-three basketball tournament in honor of Justin Brumbaugh, a resident who died in 1998 from heart complications. The men of the hall organize the Brumbaugh Basketball Tournament for any campus team willing to pay a small entrance fee. The winners receive prizes donated by local retailers, and proceeds go to Habitat for Humanity.