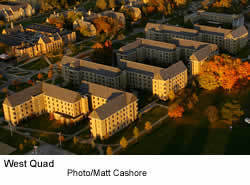 They Call Themselves: The Shamrocks. With their chants of “Who, who, who are we? Mc, Mc, McG!” and their signature green togas, the ladies of McGlinn Hall are easily recognizable at pep rallies.

Named For: Terrence and Barbara McGlinn. Terrence ’62, a fellow of the University and successful entrepreneur and investor, has served as a member of the Notre Dame Board of Trustees since 1994.

Dorm Culture: After Knott Hall became a men’s dorm during the campus-wide shuffle of office and dorm space in 1997, the former Angels moved into McGlinn that fall and haven’t looked back since. The dorm hosts Meal of Nations every fall, at which various multicultural groups on campus serve up food and entertainment. During their annual spring Casino Night, participants win play money they can exchange for prizes. McGlinn donates all proceeds from the event to the Catholic Worker House in South Bend.

They Call Themselves: The Angry Mob. O’Neill was one of the first residence halls constructed since Flanner Hall and Grace Hall were built in 1969. The first residents came from Grace, which held more than 500 students in its 11 floors. According to legend, some students were irate over their relocation and held a series of bonfires in protest, and so “The Angry Mob” was born.

Named For: Joseph O’Neill Jr. ’37, a football walk-on who became an All-American in his senior year. His son, Joseph I. O’Neill III, serves on the board of trustees.

Dorm Culture: Every fall since 2002, O’Neill sponsors the Ms. ND Contest. Judges evaluate candidates from each of the 13 women’s halls based on formal wear, talent and spontaneous responses to questions. Past panel judges have included former quarterback Brady Quinn ’07 and William Kirk ’84, ’91J.D., associate vice president for residence life. The event usually fills the 571-seat Washington Hall. O’Neill has won the Fisher Regatta twice in a row and the Men’s Hall of the Year award twice in the past three years. It was also the home of Irish football players David Givens ’02, Maurice Stovall ’06 and Darius Walker.

They Call Themselves: The Kangaroos, or ’Roos for short.

Named For: Marilyn M. Keough, whose husband, Donald Keough, was the former president and chief executive officer of The Coca-Cola Company and served as the chairman of the Notre Dame Board of Trustees from 1986 to 1992.

Dorm Culture: Different sections within Keough and other dorms build their own chariots and race against each other for the hall’s annual fall Chariot Race. Each spring Keough hosts The White Wedding, in which the ’Roos create comical mock weddings for dorm mates and their dates. The annual Aussie Fest wraps up the second semester with a cookout, games and music.

They Call Themselves: The Whirlwind, the Fam

Named For: Robert J. Welsh Jr. ’56, a trustee emeritus of the University, and his wife, Kathleen. Mr. Welsh is the president and chief executive officer of Welsh Oil, Inc.

Dorm Culture: Welsh Family is an athletic dorm: The women have won the Late-Night Olympics Championship with their partners in Keough for seven of the past eight years. They are also three-time Interhall Football Champions. Former Irish basketball players Niele Ivey ’00 and Ruth Riley ’01 were residents. The dorm’s annual fall Block Party serves up food and activities in the area between Keough and Welsh Family and on the pedestrian street between West Quad and South Quad. The event began in 2005, and all proceeds go to benefit the Hurricane Katrina Relief Fund and the Room to Read organization.