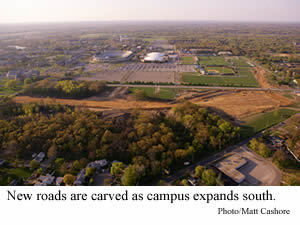 The abundant construction happening on campus is being accompanied by a fair amount of destruction.

The most controversial transition involves the future of the University Club. The private dining club has long been a popular gathering place for faculty, especially retirees, but plans call for an engineering college building to take its place on the east side of Notre Dame Avenue between McKenna Hall (the Center for Continuing Education) and the Hesburgh Center. Many of the club’s members don’t want to see it go and have gathered hundreds of signatures on a petition along with letters of opposition.

Executive Vice President John Affleck-Graves said the University is still raising money for the engineering building, so nothing is imminent. “We’re hoping to be done in a couple of years.” In the meantime, he said, the University supports the idea of the University Club remaining on campus and will do everything it can to accommodate it. He said it will be up to the club’s board to decide if any of the alternatives are adequate.

Earlier this year, the wrecking ball fell on two houses the University owned at the intersection of Notre Dame Avenue and Angela Boulevard. The lots will become part of a more elaborate new southern gateway to campus. The house on the corner was known informally as Jesuit House because that’s where the late Jesuit theologian Father Richard McCormick lived after Father Hesburgh brought him to the University in the 1980s. Other Jesuit faculty later lived there as well.

The gateway project also spells doom for the grassy mound on the northeast corner of Notre Dame Avenue and Angela. For many years an ND emblem was planted there in flowers. The landmark was scheduled to be bulldozed after commencement.

Also torn down earlier this year was Edison House on the north side of Edison Road in the vicinity of the Eck Baseball Stadium. The building was removed to make way for the new north-south road being constructed as a substitute for the section of Juniper Road that passes through campus. Plans have been approved for Juniper to be closed immediately north and south of campus and the roadway removed to make it easier and safer for pedestrians to reach destinations on the east side of campus like the Jordan Hall of Science and the Guglielmino Athletics Complex, both nearing completion.

The replacement north-south artery will roughly parallel Ivy Road and then merge with Ivy east of the varsity soccer and softball fields. Further south it will connect to a new Edison/Angela, shifted south for most of the distance the current Edison/Angela runs past campus.

Already under construction, the new roadway cuts across the triangular plot of land bordered by Edison, South Bend Avenue and Eddy Street. The western half of that parcel is wooded. The eastern part consists of a grass field known as Blue Field South on football Saturdays. The field is adjacent to the venerable Linebacker Lounge and had been the site of youth soccer games.