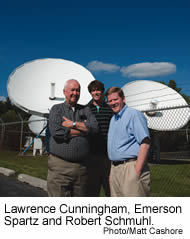 They take calls about lips on Valentine’s Day, the cross on Easter and gas prices on Memorial Day weekend. They share expertise on solar power and lunar landings, Woody Guthrie and Irish dance, Church politics and selective conscientious objectors. They appear for live interviews on CNN, CNBC and The NewsHour with Jim Lehrer, and they’re as likely to be quoted in major dailies like The New York Times and The Wall Street Journal and opinion magazines from The Nation to the National Review as they are in such smaller publications as The Herald Bulletin of Anderson, Indiana.

“They’ are Notre Dame’s media magnets, the experts who journalists on deadline turn to when they need to interpret the news. A Notre Dame Magazine notepad survey—with unashamed emphasis on the unscientific—of the daily online clipping service produced by the University’s Office of News & Information (N&I) from January 1 to July 31 found no fewer than 139 professors, administrators, staffers, coaches and students quoted in 72 different news sources. (Coverage of Fighting Irish sports wasn’t included because the Athletic Department handles its media relations separately, and it would have overwhelmed the poor notepad guy anyway.)

Judging by mere numbers of experts contacted for comment at least once, the schools and departments with the highest media profile appear to be law, theology and biological sciences. Among the University’s numerous academic institutes and centers, the Kroc Institute for International Peace Studies and the Institute for Latino Studies host the most sizeable populations of reliable sources.

The University’s media relations staff hustles to place ND experts in print articles and television and radio news segments. They train the media-shy to handle reporters, cameras and microphones—and the inevitable frustration of having complex comments clipped into sound bites or, worse yet, scrapped altogether by ruthless editors. “We don’t exercise any editorial control” over what professors do or don’t say, notes Bill Gilroy, who handles media relations for the colleges of science and engineering, the Graduate School and the University libraries.

Gilroy acknowledges that with some stories extra care goes into identifying the best person to associate with the Notre Dame name, but it is not unusual for reporters to bypass N&I altogether when they know they can count on a particular professor for a quick, pithy quote. The thin partition between good publicity and controversy isn’t always left standing, especially when alumni or the general public have the impression that a professor is speaking on the University’s behalf.

Matthew Storin ‘64, a former editor of The Boston Globe who since served as the University’s associate vice president for news and information and now teaches on the journalism faculty in the American Studies department, has seen all sides of the media-academia connection. Working in Boston, he watched professors practically throw elbows to get in the public eye. But northern Indiana lacks the intense media atmosphere of the coasts, and he found the majority of Notre Dame faculty initially lukewarm to media coverage. “They would rather tend to their scholarly gardens than set up a roadside stand,” he says.

Storin credits recent N&I initiatives and Father John Jenkins’ promotion of the role of the public intellectual in his first presidential address to the faculty in 2005 with driving up faculty interest and, consequently, the public profile of Notre Dame scholarship.

Still, some professors prefer not to talk to reporters for reasons that may seem familiar to all of us. It takes time away from scholarly priorities, often with little personal payoff for the investment. Sometimes reporters just get it wrong. And “public intellectual” is a role at times more readily played by law or arts and letters professors than others. Gilroy and Storin note several exceptions, such as the oft-quoted biology professor David Lodge, director of the Center for Aquatic Conservation, whose work on the economic and environmental impact of invasive species has put his group on the source-radar for publications ranging from the Times to the Traverse City Record-Eagle.

Then there’s the comic unpredictability of it.

“I do a fair bit of my radio commentary in the morning, from home,” says law Professor Richard Garnett. “Once, while doing a live interview on a call-in radio program, about a constitutional-law question, my daughter demanded loudly—loud enough for host and audience alike to hear—that I turn on Dora the Explorer.”

When an advocacy group circulated a press release accusing the Republican Party of using the image of a cross on the podium at the 2004 national convention as “subliminal advertising” to attract religious voters, a reporter called from the floor of the hall to ask political science Professor David Campbell for his opinion. "I did my best to explain that there really was no need to accuse the Republicans of subterfuge on the issue of religion, since the party is pretty open about its use of religious language and imagery.

“All my ‘sophisticated’ analysis was for naught, as the reporter simply wanted to know whether I thought the podium looked like it had a cross on it. So much for my Ph.D. in political science, my years of research, et cetera. All of a sudden I had become an expert on interior design,” he says.

Even funnier, Campbell adds, these comments probably had the widest distribution of any he’s made because the reporter worked for the Associated Press and the story was picked up by a lot of newspapers. “It was even read aloud by Rush Limbaugh on his radio program,” he says.

Interest in particular professors ebbs and flows, too, reflecting reporters’ judgment of the newsworthiness of their expertise. George Lopez, a Kroc Institute scholar and authority on state coercion and economic sanctions who won N&I’s 2005 “Media Legend” faculty award for his work with reporters that year, was quoted in only one article retrieved by the N&I service this year.

As if to prove the point that timing is everything, the undisputed lord of the Notre Dame media ring in the first half of 2007 was an undergraduate student. Junior Emerson Spartz, a management major, told the Indianapolis Star in July that he was fielding a dozen phone calls from reporters each day. Spartz’s expertise? Harry Potter. During the media stampede leading up to the July release of the fifth Potter film and the seventh and final novel in author J.K. Rowling’s series, the 20-year-old founder of the Potter fan site mugglenet.com was conducting a book tour of his own to promote Mugglenet.com What Will Happen in Harry Potter 7.

Spartz, who was profiled in the Autumn 2005 issue of this magazine, has indicated he’s ready to cash out of the Potter industry and re-invest in new enterprises, leaving a media vacuum for other Notre Dame experts to fill.

Other ND names most often in the news this year:

Quoted in: The NewsHour with Jim Lehrer, The New York Times, USA TODAY, others

Asked about: Saddam Hussein’s execution; free-speech decisions handed down this summer by the Supreme Court

He said it: On the conservative trajectory of the U.S. Supreme Court under Chief Justice John Roberts: “I don’t see anything like a seismic shift. It seems to me, to use the word I used before, that we’re seeing incremental steps. We’re seeing a reluctance to extend dramatically some of the precedence from the Warren and Burger court eras.” NewsHour, June 25

William R. Kenan, Jr., Professor of Sociology and Director of the Center for the Study of Religion and Society

Areas of expertise: Sociology of religion, moral behavior, the religious and spiritual lives of American teenagers

He said it: “In more religiously involved families, parents monitor young people more, pay more attention, have higher standards of moral expectations, and that could be reflected in the sort of boundaries that teens feel in their behavior and how they present themselves to peers with makeup, clothing or general attitude.” The Philadelphia Inquirer, January 6

Asked about: Mitt Romney and the 2008 presidential race; voter apprehension about Mormons and comparisons with John F. Kennedy’s run for president in 1960

He said it: “The fact that his Mormonism is out there is going to be manifest more in the whispered conversations and that sort of thing, rather than overt speeches or comments made during a debate.” CNN Newsroom, May 13

John A. O’Brien Professor of Theology

Areas of expertise: Systematic theology and culture, Christian spirituality and its history

He said it: On the popular fascination with The Da Vinci Code and the Discovery Channel’s documentary on the purported lost tomb of Jesus, which aired March 4: “Everything in the New Testament is foreground, there is not much background on the kind of details people naturally have an interest in, such as what did Jesus look like. There is a natural human curiosity and interest in depicting him.” Our Sunday Visitor, March 8

Professor of Economics and Director of the Higgins Labor Research Center

Areas of expertise: Labor research, economics of aging, the effect of pension losses on older Americans

She said it: “It’s a huge waste of money to give tax breaks to low-income workers if you don’t raise the minimum wage.” South Bend Tribune, January 4

Francis A. McAnaney Professor of History

He said it: “My own sense is that the Bible is a pretty explosive book. If students read it carefully, they’d be changed in a way that public schools couldn’t handle.” The Boston Globe, March 4

Asked about: The Democratic takeover of Congress; the Colts-Bears Super Bowl match-up; public misgivings about the death penalty; Indiana Governor Mitch Daniels; the U.S. economy as a political issue

He said it: “I think that there’s a new mood in the country, and it might not lead to the complete abolition of the death penalty, but it’s clear that government officials are taking a more cautious approach.” The Baltimore Sun, February 22