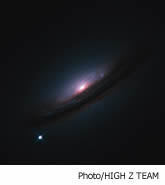 Eight years ago Notre Dame astronomer Peter Garnavich and his colleagues observed that certain distant exploding stars were fainter than accepted formulas had predicted. What may seem like a “so what?” fact turns out to have profound theoretical implications that have fueled the speculation of cosmologists ever since. That these Type Ia supernova stars were not as bright as they should have been confirmed that not only is the universe expanding but the expansion rate is accelerating, Garnavich explains.

“We had a very simple picture back then,” the ND associate professor of physics says. “It was thought that the universe was filled with a certain density of matter. And so our question was: A) Is that density enough to make the universe re-collapse to a single point through gravity, or B) Is the density too little so it may just expand forever?” While the observation answered one question with “B,” it posed another: Precisely what is causing the universe’s expansion to accelerate?

Garnavich and his collaborators were able to match their supernova observations with a large amount of dark energy detected in the universe. “But we don’t know exactly what this dark energy is, whether it is vacuum energy or something else,” Garnavich says. Cosmologists speculate that the acceleration might be caused by dark energy or it could be related to some extra dimension to the universe. Some have suggested that the clumping of matter within the immense scale of the universe could set in motion a reaction that might cause it to accelerate. In effect, the dark energy could be the kinetic energy of all the motions of individual galaxies with respect to the grand cosmic expansion.

“The theorists have really run away with this problem,” Garnavich says. “Nearly every day it seems there is a new theory to account for how you could get the universe to accelerate. There are just so many possibilities that it scares me.”

Currently, the team of astronomers of which Garnavich is a member is attempting to use these Type Ia supernova stars to make a more precise measurement of the cosmic acceleration. For the past three years, during fall break, Garnavich has worked in Chile at the Cerro Tololo Inter-American Observatory. There he and his colleagues use a four-meter optical telescope in the Andes Mountains to scan the sky for stars that exploded about 7 billion years ago, halfway back to the Big Bang. The team hopes to gather about 200 examples in five years; this more precise data might allow them to winnow down the number of possible acceleration theories.

One beneficiary of Garnavich’s observations has been Grant Mathews, a Notre Dame professor of physics. As a theoretical cosmologist, Mathews tries to understand what makes the universe tick on the grandest scale.

While Garnavich spends his time observing and calculating measurements, Mathews and his colleagues work up elaborate mathematical models to explain the observations and suggest new problems for the astronomers to explore. “We’re always looking for the next observation that doesn’t make sense, the next thing that needs to be explained,” Mathews says. “That’s when the fun begins. When something doesn’t fit, that’s when it gets interesting.”

One interesting observation cosmologists have found that has implications for a host of things, including the acceleration question, is a slight deviation in the elements that were produced in the Big Bang. The ratio of helium to the isotope deuterium doesn’t fit. “Simply put, there is not enough helium produced for the deuterium we see,” Mathews says. For a number of complicated theoretical reasons this suggests the existence of another dimension of space. And this poses an interesting question for Mathews: Why can’t we just look out there and see things in this extra dimension?

“One thing that could be happening,” he says, “is that matter might actually be leaking out into this extra-dimensional world. In fact, what you would see, at least on the theories that I’m working on, is that a proton or some matter would be moving along and then literally disappear into this extra dimension. It doesn’t have any more gravity within this dimension. It’s nothing. I always make the joke that it is the final explanation of where socks go in your dryer.”

Mathews says that some work by Garnavich’s group yielded a slight hint that there may have been more dark matter in the past. “That leads us to one of two possibilities,” he says. “Either matter is slowly leaking out into the extra dimension, or what we think is the stable dark matter particle isn’t actually stable; it’s decaying.”