When the Notre Dame football team traveled to West Point for the first time in 1913, the circumstances were quaint. Jesse Harper’s team packed sandwiches for the train and brought only 14 pairs of cleats for 18 players.

But Notre Dame did not come cheap. Harper negotiated a $1,000 guarantee, proudly returning to campus $83 in the black after expenses. Other teams got nothing for playing at West Point. Here was a hint of the unwieldy leviathan the annual clash would become over the next 34 years. 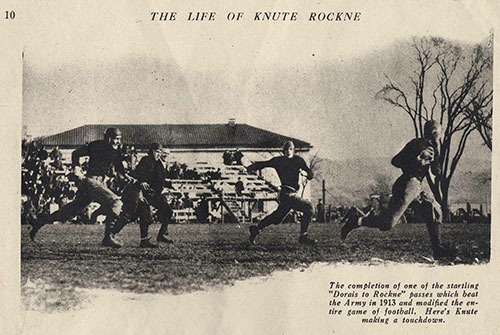 In that inaugural game, innovative downfield passing from Gus Dorais to Knute Rockne left Army “hopelessly confused and chagrined,” read The New York Times’ account of Notre Dame’s 35–13 win. Army returned the volley with a 20-7 win over Notre Dame the following year, and a rivalry soon developed that would generate so much attention it would ultimately succumb to its own success. By the late 1940s, even a gushing pipeline of legitimate revenue could not compel the priests and officers in charge to ignore the ticket scalping and gambling that sullied the ideals they wanted the game to represent.

One hundred years after it began, the rivalry has been reduced to periodic, lopsided nostalgia, with Notre Dame winning 15 of the 16 games played since the schools discontinued their original series in 1947. Back then, though, it was the incubator of the hype and profiteering that now surround college football.

Only the World Series superseded the annual New York City event for national attention. Sportswriters spun overwrought yarns — the Four Horsemen and Win One for the Gipper are relics of Notre Dame-Army — reinforcing the game’s cultural purchase.

By 1923 at Ebbets Field, the first game away from West Point’s strained bleachers, Notre Dame’s guarantee had grown to $5,000. An agreement to take a third of the gate receipts generated another $23,500. In 1924 the game moved to the Polo Grounds, where the 56,000 seating capacity was almost twice the size of Ebbets Field, “but still wasn’t large enough,” Jim Beach and Daniel Moore wrote in their 1948 book, Army vs. Notre Dame: The Big Game 1913–1947.

The next year the series migrated to the 80,000-seat Yankee Stadium, its home for all but two of the next 23 games. After roaring with the Twenties, the game was immune to the economic suffocation that followed, commanding $50 scalped tickets two weeks after the 1929 stock market crash and attracting 110,000 fans to Chicago’s Soldier Field in 1930.

“On the way to Yankee Stadium in 1932 you passed apple vendors on street corners, and bread lines were strung out all over town,” Beach and Moore write. “This was the depth of the depression, but still the Army-Notre Dame game was a sell-out — the first anywhere of that season.”

Notre Dame dominated the series, even in the lean years after Rockne’s 1931 death. With his Cadets contending for the Rose Bowl in 1933, new coach Gar Davidson said, “I’d rather win this game than be Secretary of War.” He lost, 13–12.

Irish coaches Elmer Layden and Frank Leahy never lost in the series, tying the Cadets three times in 12 games. Army overwhelmed war-depleted Notre Dame in 1944 (59–0) and 1945 (48–0), when ND had interim coaches. With the talent scales balanced after the war and Leahy back from his tour of duty, hype bubbled over for the 1946 rematch between the No. 1 and No. 2 ranked teams.

Each school received an allotment of 39,000 tickets with face values ranging from $1 to $4.80, but scalped seats went for as much as $200, Murray Sperber wrote in Onward to Victory: The Crises that Shaped College Sports. Notre Dame students and Army cadets in town for the game were besieged with offers for their tickets. During their traditional march from the 125th Street railroad depot to Yankee Stadium, the Cadet Corps ignored pushy scalpers only to be taunted as “draft dodgers” and “slackers.”

Ugly disruptions like that brought the “Frankenstein monster” metaphor that shadowed the series into the light. Administrators at both schools, Sperber writes, “wanted the annual match to be the epitome of the classical ideal in college sports, and the events of 1946 challenged, and eventually destroyed, that goal.” The famous 0–0 tie has become a football classic, but the circus that surrounded it could no longer be tolerated.

Rampant scalping and increasing concerns about the potential malign influence of gambling forced the proprietors to close college football’s biggest box office. In a joint statement, the schools said the game “had grown to such proportions that it had come to be played under conditions escaping the control of the two colleges, some of which were not conducive to wholesome intercollegiate sport.”

Before the last game of the original series in 1947, held for the first time at Notre Dame, sports columnist Red Smith ’27 recounted coach Rockne’s financial ledger from the 1919 West Point trip. Rockne had reported a loss of $603.83 — roughly the price of three scalped tickets in 1946 when, for very different reasons, the revenues still did not outweigh the costs.

Jason Kelly, a former sports columnist for the South Bend Tribune, is an associate editor of the University of Chicago Magazine. Email him at jasonkelly545@gmail.com.