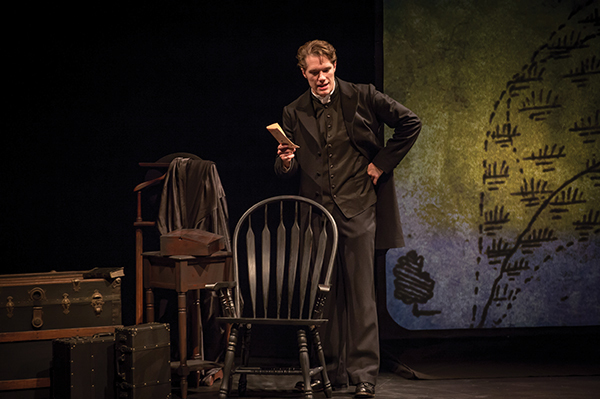 “I was surprised by how cheeky he was,” Goodrich says of Sorin. Photo by Matt Cashore ’94

Patrick Vassel ’07 is no stranger to plays about precocious immigrants with big dreams. He’s the associate and supervising director of Hamilton: An American Musical for the blockbuster’s Broadway, Chicago, San Francisco and Los Angeles productions.

But when Jim Small, Notre Dame’s associate vice president of storytelling and engagement, contacted him in July 2016 to ask him to direct Sorin: A Notre Dame Story, Vassel thought it “seemed like a pretty crazy idea.”

He took the call at New York’s Richard Rodgers Theatre, Hamilton’s Broadway home, and his first impression faded as the conversation continued.

“As we uncovered the story, the similarities between Hamilton and Sorin grew,” Vassel says. “It’s a name people know, but a person they don’t know. There are parallels between these immigrant stories.”

Small also recruited New York playwright Christina Telesca Gorman ’91 to write the script. The challenge, she says, was bringing humanity to a myth.

“How do you marry telling a true story with telling an entertaining story?” Gorman remembers asking herself.

Her solution? Treat it as Sorin remembering his life, talking to the audience as he recalls the journey to America, to Vincennes and to South Bend. Actor Matthew Goodrich ’09, who puts on the mantle of Notre Dame’s founder, offers an intimate performance: Sorin chats with the audience, makes jokes, gives color commentary. Hesitant to discuss the worst of his experiences, he grows emotional at the hard parts.

Goodrich knew very little about Sorin before he began table reads with Vassel and Gorman last January — just that the man was a French priest, founded Notre Dame and has a dorm named after him. He learned that Sorin the man embraced the pioneer American spirit, wore a duster jacket over his priestly robes, sometimes pestered his superiors and lived by the principle, “Ask forgiveness, not permission.”

“I was surprised by how cheeky he was. He really didn’t shy away from conflict,” Goodrich says. “He understood hierarchy, but he didn’t always feel the need to respect [his superiors]. It wasn’t mendacious, or deceitful, or sinful, because in his mind he was doing it all for the glory of God. Not for his recognition, but for the recognition of God and the Holy Mother. That was always the bedrock of his ambition.”

Goodrich’s background in French, having studied abroad in France as an undergraduate, better equipped him to play the young Sorin. He maintains a French-tinted American accent throughout the play, changing it gradually during the performance just as Sorin’s accent changed through his lifetime in America.

“At its very root, this is an immigrant story,” Goodrich says. “The English language comes in many forms, and people have many ways to speak it and no one form is more valid than any other. It’s a nice challenge and opportunity we give to the audience.

“Patrick really tried to direct me into a portrayal that was a lot more in keeping with my own personality,” Goodrich continues. “He didn’t want some character up there. What he wanted more was a friendly persona relating these great stories about Notre Dame, while also going on a journey of faith for the benefit of the audience.”

The show, staged without large, cumbersome props, is also built to travel. There are plans to take Sorin to cities across the country throughout 2018.

Projection designer Ryan Belock ’11 helped make the production travel-ready, and visually appealing, creating digital images displayed on screens across the stage. He drew on a wealth of original writings and photographs from the Notre Dame Archives, scanning them for the multimedia displays.

“You can think of it as the projections functioning as a scene partner for Matt,” Belock explains. “The projections are not just showing us the physical journey, but also showing us what’s going on in his heart, soul and mind.” So, when Sorin thinks about people, their photographs appear on the screen. Maps trace his journey across the United States. The audience hears and sees the flicker of flames when the Main Building burns down.

The show has been popular — campus performances throughout the fall “sold out” (though tickets are free) and standing ovations for Goodrich’s portrayal were frequent.

For Small, the play culminates a vision to add a unique element to Notre Dame’s 175th anniversary commemoration: A celebration of the University’s founding that inspires people through Sorin’s example to leave the theater thinking, “It’s our turn.”

Amanda Gray is the web content editor at Notre Dame Law School. Check out tour dates and locations for Sorin at sorinplay.nd.edu.