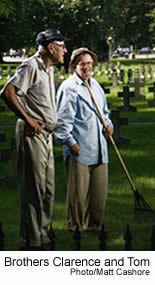 To the uninitiated—and, perhaps, unenlightened—it may seem among the most morbid of vocations. A task best left unconsidered. Brother Clarence Breitenbach, CSC, has his own perspective.

“I dig the graves,” he states quite simply of his service at the Holy Cross community cemetery, where he has worked since 1967. He maneuvers an old backhoe, and at times a shovel, to hollow out the final resting places for members of the religious and academic community who have died during his tenure.

“It’s part of life. And it’s not the end, you know,” says Brother Clarence, who also tends the graveyard grounds. “I knew practically all the men who are buried there, and it’s almost kind of like a visit when you mow and you see these names, and they hit you right off the bat. It’s very far from depressing.”

What is saddening, however, is the recognition that Brother Clarence and his ilk are something of a dying breed. Even the old backhoe, purchased in 1966 for $750, is gone as of last year when the winter maintenance came to be a bit too much. It was sold, still in good condition, for $800. The job of digging the graves has been turned over to Community Vault, the Mishawaka, Indiana, company that also engraves the monuments, with the exception of plots in areas where the backhoe can’t reach. Brother Clarence—at age 80—still digs those by hand as needed.

After more than a century, the brothers’ numbers are dwindling. It appears that no one is waiting in the wings, leaving many to wonder: Where have all the brothers gone?

“We don’t have too many,” says Brother Tom Tucker, CSC, who helps Brother Clarence in the cemetery, among his varied duties. “When I came in, we had 60 brothers in the province. Now we’ve got about 12. And I think the youngest one is in his 60s.”

Brother Tom, who professed in 1956, four years after Brother Clarence, witnessed the community thrive and flourish in its younger years. He now acknowledges the steady attrition of the brotherhood in which he has spent most of his life in prayer, community and service.

“It used to be sad,” he admits, but he adds quickly, “We’re well taken care of. The Lord takes care of us.”

The brothers who remain continue to take care of their community, too, just as they have since the first group of seven came to northern Indiana with Father Sorin in the 1840s.

“What’s marvelous about these people was they did not have college educations, but they were enormously creative, and they knew how to get the most with the least,” says Rev. Leonard Banas, CSC, a retired professor of classics at Notre Dame who now serves as a student adviser in the College of Arts and Letters.

“Their personal holiness is simply a source of great edification,” he adds. “They’re good, stable religious.”

Father Banas, educated by brothers both in high school and as a Holy Cross novice on the farm in Rolling Prairie, Indiana, remembers with great affection some of the brothers of days gone by: Cosmas, a “saintly old man” who lived into his 90s; Hormisdas, the house painter who whistled while he worked; Seraphim, an “incredible farmer” who astounded him with the things he could grow. All are now gone, buried in the very spot that Brothers Clarence and Tom maintain, where, ultimately, they will one day be laid to rest themselves, nestled in among their dear friends and spiritual kin.

The cemetery itself, located just above the north shore of Saint Mary’s Lake, sits in quiet tribute to its occupants—900 or so brothers, priests and others with strong ties to the Holy Cross community. In death, all are equal, each represented identically by a sturdy limestone cross engraved with a simple circle containing the initials “R.I.P.,” followed by a name and dates. Aside from a few stones that are decorated with flowers, crosses or personal memorabilia, the rows of crosses are impeccably symmetrical and aligned in perfect order.

Look at the names in the southeast corner of the cemetery, however, and it does read a bit like a who’s who of Notre Dame history. Here you’ll find Fathers Sorin, Corby, Cavanaugh, Zahm, and more who remain very much alive in spirit around campus, more than a hundred years after their deaths.

In much the same way, the brothers, both those who have passed and their not-yet-departed counterparts, serve as a source of inspiration to those who remain optimistic that this generation will not be the last.

“I don’t like to talk in terms of dying out, because I’m still hopeful that someplace down the line there will be a change,” says Father Banas.

Brother Clarence has no plans to retire, although he knows he can’t do a lot of the things he did as a younger man. He accepts that change is inevitable and maintains a pragmatic point of view.

“It’s like everything else—nothing stays the same,” he says.

“It’s like fruit and crops and so on. Comes harvest time, you say ‘Oh, what a beautiful field.’ You hate to see that go. If you do the harvesting, then the thing lays barren. And then springtime, something new starts. Resurrected.”