Notre Dame’s shifting positions on insurance coverage for birth control have caused confusion and controversy. In attempting to reconcile Catholic Church teaching with the medical needs, financial concerns and diverse moral views of the 17,000 people covered under its health plans, the administration has baffled some, angered some and appeased others.

Wading into the contentious issue once again, University President Rev. John I. Jenkins, CSC, ’76, ’78M.A. tried to bring clarity to Notre Dame’s position in February when he introduced the current policy. Effective July 1, the University will provide coverage for “simple contraceptives” through its insurance plans, but stop short of any form of funding for “abortion-inducing drugs.” Natural family planning methods will be covered. Sterilization procedures will not.

In his message announcing the decision, Jenkins noted that “a tension exists between establishing policies in accord with Catholic teaching and respecting the religious traditions and decisions of the many members of our community.” 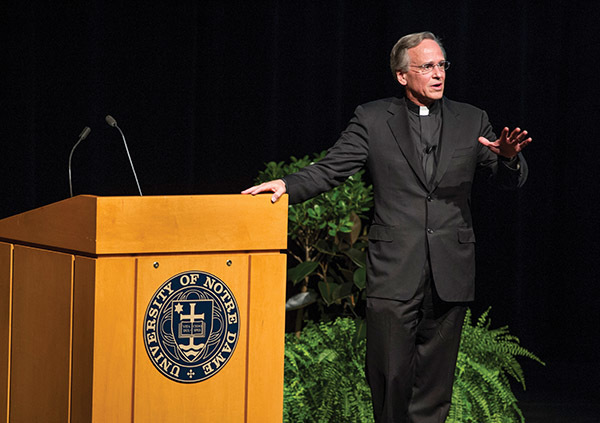 That tension has been evident all along the winding road that led to the February announcement.

In 2012 and 2013, Notre Dame and other religious nonprofits sued the U.S. Department of Health and Human Services over the Affordable Care Act’s mandate to provide employees covered under their health insurance plans with birth-control coverage. Plaintiffs claimed the requirement violated their right to the free exercise of religion. Even the choice to opt out of the mandate — the contested coverage would be directed through a third party with government funding — did not eliminate the “scandal” of association with a product deemed immoral, Notre Dame argued, by its facilitating others to engage in wrongdoing.

The 7th U.S. Circuit Court of Appeals ruled against the religious organizations, and the University began offering contraceptives in 2014 through a government-funded third-party provider. Last fall, President Donald Trump removed the opt-out obligation, allowing organizations with religious objections to disregard the birth-control requirement.

That’s what Notre Dame announced in late October that it would do, returning to its pre-2014 policy of not covering contraceptives of any kind. The decision prompted opposition from those who felt the financial burden of paying out of pocket would be too great and that personal medical decisions should not be influenced by an employer’s moral stance.

One week later, though, the University changed course, saying that, in fact, those covered under its insurance plans would continue to have access to contraceptives through the government-funded program. This announcement raised the charge of hypocrisy from supporters of Notre Dame’s legal effort to win the right to follow Catholic teaching. Ryan Anderson ’15Ph.D., a senior research fellow at The Heritage Foundation, wrote on Twitter: “Notre Dame spent five years suing the federal government for the right to provide moral health insurance. They now have that right. And they’re choosing not to exercise it. . . . Shameful. Scandalous.”

In his February statement, Jenkins said that the purpose of Notre Dame’s lawsuit had been to assert the “right to decide” on the University’s own terms, free from government interference, as a matter of principle on a range of issues.

Concerning the University’s reversal in November, he wrote, “I thought it best, having established our right to decide, to allow the government-funded provision of these drugs and services to continue so that our employees could have access without University funding or immediate and direct involvement in their provision.”

But because the government-funded program also covered abortion-inducing drugs, “which are far more gravely objectionable in Catholic teaching,” Jenkins concluded that Notre Dame should go another route. Drawing a distinction between birth-control methods that prevent pregnancy and those that terminate a pregnancy, he settled on a course that eliminated the availability of abortifacient drugs through any University-affiliated plan, but maintained coverage of other forms of birth control.

“Stopping any access to contraceptives through our health care plan would allow the University to be free of involvement with drugs that are morally objectionable in Catholic teaching,” Jenkins said, “but it would burden those who have made conscientious decisions about the use of such drugs and rely on the University for health care benefits.”

The new policy drew a range of responses on campus and beyond.

Covering birth-control pills is “a very important concession,” Program of Liberal Studies professor Gretchen Reydams-Schils told The Atlantic. “In that case, I as a Catholic could endorse the president’s decision and respect his discernment process.”

Bishop Kevin C. Rhoades of the Diocese of Fort Wayne-South Bend issued a statement objecting to the decision. “I understand Notre Dame’s desire to respect other religious traditions and the conscientious decisions of members of the Notre Dame community on this issue,” Rhoades said. “Members of the community who decide to use contraceptives, however, should not expect the university to act contrary to its Catholic beliefs by funding these contraceptives.”

In an interview with The Atlantic, Jenkins characterized his decision as more than “mere splitting the difference. The moral life is complex. . . . It is an attempt to find the best policy given the various principles that are germane.”