The heavy mist turned into rain, shrouding South Australia’s coast. I stood on the beach, looking back at the sleepy beach town of Glenelg disappearing in the dusk. As I soaked in that final evening of my week of solo travel, I realized that I’d spent hours of my life on beaches — but had never been on a beach by myself. 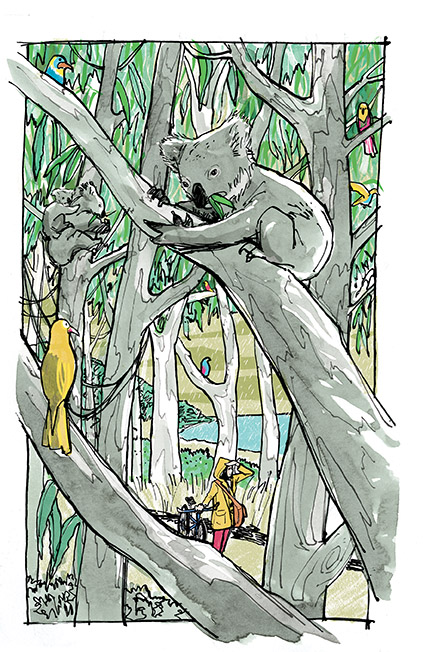 Nor had I ever spent time alone atop a mountain or in the dead of a forest.

I like adventure — but in an organized, buddy-system way. Plans make me comfortable; spontaneity takes an ironic amount of effort. I manage an armload of responsibilities. I meet my obligations daily and check off goals as they’re completed. So when I set off for my study break from the University of Western Australia in Perth, I knew I was about to veer onto an unfamiliar frontage road, a different pattern of life. I had only booked a hostel for my first two nights, restraining my apprehension at not knowing where I’d be in three days and trying to embrace a real sense of adventure.

This was not a moment for absentmindedly looking out the bus window or chatting cheerfully with companions through the streets of South Australia’s capital. Instead, I boarded a bus at Adelaide Airport and confirmed with the driver that he’d stop where I needed and then I focused on reading street signs so I wouldn’t miss my stop. As I prepared to disembark, hoping I’d observed correctly, a middle-aged man affirmed that this was my stop. We got off together and I soon discovered that he was staying in the same hostel as me. I’d chosen well, he proclaimed. He always stays there when he comes to Adelaide to visit his daughter. I breathed a sigh of relief as we walked to the hostel together, chatting the whole way.

I’m not often keen to strike up conversations with strangers and I kept my guard up, but I knew I needed a healthy openness to enjoy my trip. Learning to say yes to kindness, I reminded myself, is just as valuable as learning to say no to reasonable threats.

Backpack Oz was the first hostel I’d ever stayed in by myself. But of course, I wasn’t alone. I soon met Rens from Holland who guessed where I’m from in California, had been traveling for eight months since determining he doesn’t like accounting and was on a quest to learn the word for beer in every language. Mia occupied one of the bunks in my six-bed female dorm. Originally from South Korea, she moved to a tiny town about three hours from Adelaide and ran a hostel there with her German boyfriend. Tired of that, she had lived in this hostel for three weeks and was taking yoga classes.

Then there was Jess, a German girl traveling around the world. She had a job waiting for her in Germany and wanted to see every continent except Antarctica before taking it. In America, she planned to visit a friend who had gone to Germany on exchange. He goes to some school in Indiana, she explained, and before the words were even out of her mouth, “Notre Dame” was out of mine, and soon we were talking about her friend and what he studies.

It all made this vast world seem amazingly small and the hostel in Adelaide feel even more welcoming, this sudden new perception of life lived beyond the expectations governing me, of people finding happiness beyond the prescribed pathways.

Pedaling along the 11-mile trail from Adelaide to the ocean, I felt liberated. I rode on through the intermittent downpours, occasionally taking shelter beneath a tree. Knowing that companions may not have been happy on this wet adventure, I delighted in my autonomy. Sometimes I get stuck on decisions as inconsequential as when to eat lunch. Extensive mental “pro and con” lists always seem to precede the conclusion. Consulting others often bogs down the decision-making process as we dwell on meaningless options. Having made the choice to pause, I perched on the backrest of a wet bench feeling peaceful as I admired horses in the field beyond.

Soon I arrived at the “southern ocean,” delighting in the beach’s cold, windy majesty. Port Adelaide was meant to be a short bike ride and yet I spent the next several hours finding my way there. During my search I visited with a woman from Minnesota whom I’d asked for directions, scrambled up some isolated dunes for a new view of the sea and eventually ate the most satisfying sandwich I’d had in days.

I was bummed that Port Adelaide was actually a tiny historic town rather than the bustling port I’d expected and disappointed that the lighthouse tour had closed a few hours before I arrived. But I enjoyed perusing the Maritime Museum at my own rate and tried to accept my growing exhaustion as the sign of a day well lived. Though it wasn’t in the plans, I took a train back to Adelaide, telling myself not to dwell on the extra money I spent to buy my bicycle a train ticket.

The next day I was ready for a more straightforward adventure. “You will not get lost. It will be obvious!” the hostel man assured me as I cheerfully set off to find a bus to take me to the trailhead at Cleland Wildlife Park and the scenic Mount Lofty. Finding the correct bus put me way behind schedule — until I remembered I didn’t actually have a schedule. A bus eventually delivered me to a vague path that led into a forest, which looked more promising when I saw a sign depicting koala crossings and then a map and information plaque. The plaque insisted that all bushwalkers must be well equipped with at least four liters of water; I had forgotten mine, but plodded onward.

Colorful birds flitted to and fro among the eucalyptuses, and their cacophony cheered me on. Soon a view of the city and a snack eased my pervading worries about where I was and how I’d get back. Then, strolling along a ridge, I spotted my first koala, nestled high in a eucalyptus, sleeping soundly. Koalas soon seemed to materialize one after another. Before long, I read about dingoes, saw fierce Tasmanian devils and watched with wonder as a toddler fed a joey in its mother’s pouch.

Two visitors just a few years older than me were eager to chat after we had taken turns petting a koala. They were impressed that I had hiked there and were eager to drive me to the Mount Lofty lookout and back to the city. Gabbi had just moved to Adelaide from England. Rob was from Adelaide and had worked at restaurants in England for a few years. He’d been home less than a year but was itching to travel again.

Sitting in a café the next day, I discovered that a boat that would take me to the isolated Kangaroo Island had been cancelled due to stormy seas. I was suddenly thankful for my smartphone and the café’s wifi. Within 10 minutes I had cancelled my Kangaroo Island hostel and booked a train in the other direction to McLaren Vale. As I dashed through Adelaide, having chosen a train whose departure time didn’t accommodate my customary 20-minute buffer for getting lost, I wasn’t sure what I was doing. All I knew was that I was now going to spend a night in South Australia’s wine country.

But with her notes on a map, I was soon wandering along in a drizzle, in my maroon pants, raindrop-designed shoes and bright orange tote bag.

Surrounded by vineyards, with a small main street nestled among rolling hills, the town of McLaren Vale felt like home to me. But, just like home, the town shut down after 5 p.m. The big hostel catered to people on working-holiday visas rather than the on-the-go traveler. I saw a few residents, but there was no bustling common area, and I had the four-bunk room to myself. Resigned to a night of reading, I ventured into the massive kitchen to put my burrito in the fridge and was greeted with cheerful hellos. “We’re from Japan,” someone called out from one of the industrial metal tables. “Want to drink our wine?” In another place, these words wouldn’t have sounded so wonderful, but my reply was only slightly hesitant:  “I’m from the States — and, OK!”

The three were a woman and a man from Japan and a guy from Korea. They were learning English and ready to laugh. I learned why Eri thought the United States was scary, and appreciated her goal of seeing the rainbow sulfur pools in Yellowstone. I taught them a card game that a Danish man had once taught me. In exchange, they taught me a Japanese card game. I laughed as eagerly as they did, happy with the camaraderie.

The next morning it took a minute for the lady at the visitor center to get over her shock that I was exploring the area on foot. But with her notes on a map, I was soon wandering along in a drizzle, in my maroon pants, raindrop-designed shoes and bright orange tote bag. At about 10 a.m. I stepped into a winery, tasted the wine and told the woman I was from the Napa Valley in California. Soon I was on my way again, snapping pictures with my disposable camera and checking the map as I strolled into the countryside. I let the mist wake me up and chatted with the cockatiels. Any anxiety about where I would be next rolled off my raincoat.

Munching on a chocolate-covered honeycomb helped me withstand the jumble of trains, buses and misdirection that finally got me to my week’s final destination. The Glenelg Beach Hostel’s high ceilings and single beds distinguished it from typical hostels, I told my roommate, Cassidy, when she said she’d never stayed in a hostel before. The 18-year-old was exhausted from spending the previous night in her car at the base of a waterfall, surrounded by a herd of noisy and frightening kangaroos. Originally from Melbourne, she wanted to move out of her parents’ home and make her living selling colorful Hula-Hoops and busking on street corners. When I ran into her downtown the next day, I saw her excitement at receiving her first busking permit from the city and I reveled at how connected I felt, like I was a local instead of a visitor.

Strolling along the beach on my last night in South Australia, I sang to myself. I made up songs as I went, throwing out lines as rhyming couplets, repeating refrains as if they truly belonged. As a child I wanted to be a singer and songwriter, but it had been years since I had stood on an armchair, belting out my lyrics. But here, by myself with the sand and the saltwater, I knew my words were lost in the wind as they blew out across the water. I knew I could take this time to connect with myself, to connect to the earth around me and to express my joy at being here, simply experiencing the moment in a way that felt right.

After graduating, Natalie Ambrosio, a former intern at this magazine, went to work for ND-GAIN, the Notre Dame Global Adaptation Initiative. She is now an editor at Four Twenty Seven and lives in Berkeley, California.