Olivia Mogaka first heard about Notre Dame in true millennial style: She Googled it. “I searched for ‘best business university,’ and Notre Dame came up. I didn’t know much about the school, but one of my teachers encouraged me to apply. I wanted to come to a place that was really strong in entrepreneurship.”

Mogaka arrived at Notre Dame in 2013 from the African Leadership Academy and by way of her Nairobi, Kenya, hometown — where she is one of eight children in her family.

There is a certain zest for life in Kenya, an energy Mogaka says she misses, along with the food, music and expressive nature of Kenyan people. 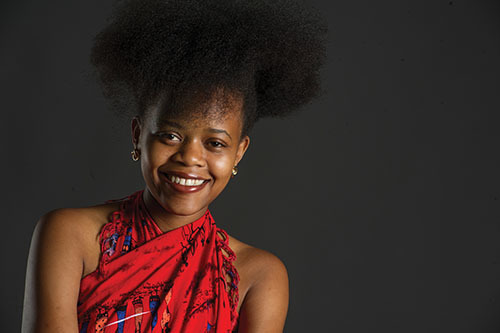 Mogaka is an embodiment of that energy, and when she needs to express herself she does so through dance. Sometimes she dances in the privacy of her Howard Hall room, other times as a member of Dance Africa, a club that celebrates traditional African music and dance through performances on campus. When she needs a Kenyan music fix, “Coming Home” by Nameless and “Sura Yako” by Sauti Sol are at the top of her playlist.

Her time in the United States has been filled with memorable adventures, including her first frosty winter and her first trip to New York City, where she attended Broadway shows and rubbed elbows with celebrities for class credit.

“I just loved Times Square, and it was amazing to see such talented performers on stage. Every show was incredible,” Mogaka says. Her souveirs even included a selfie with actor James Franco following his performance in Of Mice and Men.

“Then we got lost . . . completely and totally lost in New York. But we eventually found our way back to the group,” she says. “I’ll have that story for a lifetime.”

Mogaka also works on campus as a research assistant at the Kellogg Institute for International Studies. During the spring semester, she helped with a project that analyzes international aid organizations and their financial impact in different sectors of Africa.

This summer she is putting her double major in management consulting and peace studies to use as a talent management intern for IBM in Kenya. Mogaka’s not sure what she wants to do after graduation — she has many exciting options.

“I’m thinking maybe graduate school, law school or something in consulting. There’s just so much I want to do, I’m not sure how to pick what I’ll do first.”