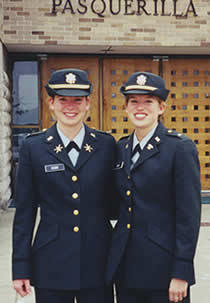 My twin sister, Lacy Dodd ‘99, and I had looked for college money and found it with the U.S. Army. So we arrived at Notre Dame in 1995 as students and cadets in its Army Reserve Officers’ Training Corps (ROTC) program.

I grew up in an Irish Catholic family and loved Notre Dame. My father, Bill Dodd ’62, along with my older siblings, Alycia Tullos ’87, Lindsay Gannon ’88 (and her husband, Bill Gannon ’88) and Laurin Dodd ’89, were all ND graduates. My father was also a distinguished graduate of its Army ROTC program. He had volunteered without asking for any sort of financial assistance. Perhaps the inspiration was his father, who had served as a doctor during World War II. My father served in the infantry for two years before Vietnam. With a Wharton MBA, he became an entrepreneur, and business was good when my older siblings headed to college. But Lacy and I needed scholarships, and we both decided to take the ROTC offers.

My parents and grandparents were proud of our decision and kept referring to our “going into the service.” What were they talking about? We were going to have to be in the Army.

After four years of ROTC, including a boot camp the summer after junior year, I knew what they were talking about. We were about to become part of something special, the U.S. military. It was “the service.”

The days of presidents’ children serving in our military seem to be gone. Lacy and I recently saw a sticker on a street corner that read: “Why aren’t those Bush twins in Iraq?” We laughed and then looked at each other with pride that the twins in our family had somehow chosen to serve in our military.

As part of Notre Dame ROTC, Lacy and I began our transformation from children to responsible citizens with a sense of patriotism we had not before known. By graduation in 1999, we would be given the enormous responsibility of being commissioned as officers. This would be the greatest honor and would be a title we had to earn, as we learned to embody the values of leadership, duty, respect, selfless service, honor, integrity, and physical and moral courage (LDRSHIP). We learned that the hardest things in life can be the most rewarding.

I remember participating in an outdoor ROTC training exercise in the middle of what seemed to be a South Bend blizzard. As a freshman cadet, somehow I missed the instruction to wear “polypro” (long underwear) underneath my uniform. I never made that mistake again. I was freezing, and it was hellish lying in the snow behind a tree “in position.” When I looked up, everything around me was white . . . and then I saw the Golden Dome beaming. In suffering, I found heaven and grace.

A leap of faith

ND’s ROTC offers summer slots for interested cadets to go to such schools as the U.S. Army Airborne School. At the time, I did not see the value in such training. After graduation and while on active duty, I saw the value and joined a pre-Ranger physical fitness program and signed up for Airborne School. I was in the best physical shape of my life. With parachute, I jumped out of a plane five times. I remember my first jump vividly. In the plane, everyone was silent, praying. The jumpmaster said, “There’s no such thing as an airborne atheist!” When I jumped out and heard the beautiful snap of my parachute opening, I yelled into the sky, “Thank you, God!”

I was stationed in Germany, where I started out as an Air Defense Artillery (ADA) officer and became a public affairs officer. I had the privilege of being a platoon leader in ADA and was able to work in my favorite field of public affairs. As an American studies major with classes in journalism and photography, I found this job a perfect fit. Lacy, also assigned to Germany, worked as a logistics officer. We both knew that we were given work and responsibility beyond our years and experience, and that this was a tremendous opportunity.

September 11, 2001, was the end of the “peacetime Army” we knew. Terrorists had declared war on our country. I prayed for peace. In General Douglas MacArthur’s words, “The soldier above all other people prays for peace, for he must suffer and bear the deepest wounds and scars of war.”

In January 2003, my unit deployed to Israel to assist with our patriot missiles in the event Saddam Hussein fired scuds on Israel, as he had in the first Gulf war. Thankfully, that did not happen. Meanwhile, my boyfriend, Jake Miller, an Army Chinook helicopter pilot, flew across the Iraq border carrying infantry soldiers the night before the ground war started. He stayed in Iraq for nearly a year.

Mother to then 3-year-old daughter, Mary-Logan, Lacy also deployed to Iraq for several months in 2003.

In 2005, Jake returned to Iraq again for another year-long tour, this time as my husband and father to our then 5-month-old daughter, Kathryn.

Out of choice, Lacy and I both served a little more time than our four-year commitment. What we had once dreaded became a commitment hard to leave. Though we did not feel the calling to be career officers, it helped to know we would bring our military experiences to “the civilian world.” We soon found that in the workplace, military service is considered a distinguishing background and is often viewed like having another degree. Lacy is now a manager in corporate America, and I am a professional photographer.

If making the ROTC decision today, I would choose to do it regardless of scholarship money. What I got out of that decision is something truly invaluable and hard to describe to people who have not served or do not know someone close to them who has served. My service built me as a person, as a citizen of our country, and as an ambassador for our country to nations all over the world. I would not trade my service for anything.

When Jake arrived home from Iraq in 2006, he had completed his commitment and could choose to leave the Army. But something had happened that would forever impact our lives.

On May 25, 2006, Doug DiCenzo, Jake’s best friend and West Point roommate, was killed in Baghdad by terrorists who used a roadside bomb. Doug was husband to Nicole and father to Dak. Picture the perfect son of our country, and that is who we lost.

Jake’s sense of duty was now greater than ever. He decided to make the Army a career. He would pick up the flag where his best buddy left off and serve as long as he could.

Currently, the Army is having Jake get his MBA at Stanford before returning to West Point to teach leadership to cadets.

I know Jake could do anything he wanted. I am proud of his decision and have chosen to be married to it. Our military, our country and our world need leaders like Jake in our Army.

I am forever grateful to Notre Dame and its ROTC program. Because of it, I will always ask myself “What can I do for my country?” I will always have in my heart “God, Country, Notre Dame.”

Photo of Amanda, left, and Lacy Dodd by Bill Dodd ’62