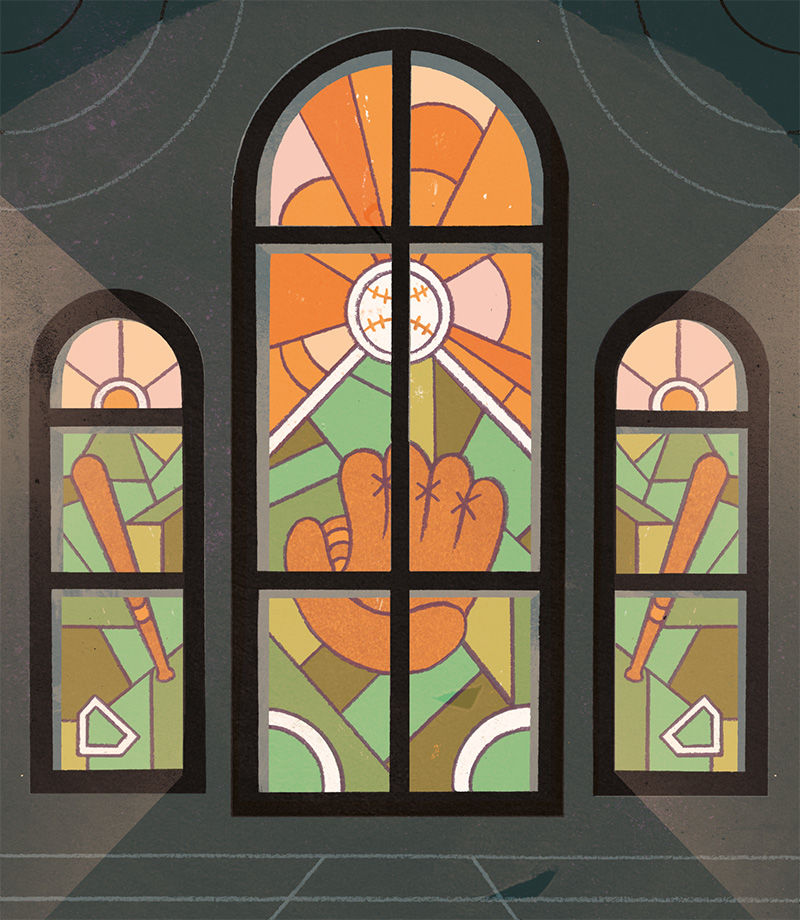 My 95-year-old mother and I enjoy getting together in front of her TV to watch Buffalo Bills football games on Sunday afternoons. If the game starts at 1:00, I rarely make it in time for the opening kickoff. Our 11:00 Mass finishes by 12:15, so there should be plenty of time since it’s just a 25-minute ride to Mom’s. But when your parish is blessed with people who like to hang out together, you can’t just leave without stopping by the coffee-and-donut social or checking in with the youth group.

Until my father passed away, I would watch the games with him. My mother stayed away lest she jinx the team, a superstition dating back to the Bills’ woeful 1968 season. (Mom, they went through six quarterbacks that year, including Ed Rutkowski ’63. You did not jinx them!)

The first Bills game I ever watched was a victory over the Patriots — how times have changed — in 1963. Back then, Dad and I would go to 7:00 a.m. Sunday Mass at St. Benedict’s without fail. Dad was an usher, so we always arrived early. We never missed a Sunday, even if one of us was sick, and certainly not because I had soccer or basketball practice. For one thing, I was never good enough to actually make a team. For another, nobody would have scheduled a practice or game on Sunday morning. And even if they had, there’s no question we would have gone to church. My mind might already have been focused on Jack Kemp, but my body was definitely at the corner of Main and Eggert, six pews from the back.

Growing up loving both sports and church, I’ve noted a seismic shift in how society prioritizes the two, measured in time, money and energy expended. As a youth, I tuned in to the Major League Baseball Game of the Week every Saturday afternoon on NBC. Now, with cable, satellite and the internet, I have access to more games in one day than I once would have watched in an entire summer. Technology drove part of that change, but so did our priorities.

In the 1970s a Sports Illustrated essayist questioned how we could justify the average professional athlete’s salary being four times greater than a teacher’s. Today it’s 50 times greater. If you’re lucky enough to be Mike Trout, the multiplier jumps to 570.

Pro sports have brought a lifetime of joy to my mother, going back to when she’d pay a quarter to watch the Buffalo Bisons play baseball at Offermann Stadium. That beloved ballpark was built in 1924, the year she was born. It was state of the art and even had lights for night games five years before major-league parks did. It cost $250,000 to build. Two years later and eight miles away, work on Our Lady of Victory in Lackawanna was completed for $3.2 million. That’s in 1924 dollars, not adjusted for inflation. The glorious church would become a basilica and national shrine.

Fast forward. Today the most expensive church in our diocese, St. Mary’s in Swormville, cost $6 million to build in 2010. Buffalo hasn’t got a new football stadium, but in 2014 renovations to New Era Field, where the Bills play, cost $130 million.

The church where I serve was built in 2006 after a fire destroyed the old church. Some considered it folly to spend such an outrageous sum as $2 million on a new building to serve a relatively small congregation. Across the street is JFK Park, a proposed site for a new Buffalo Public Schools field house with a price tag of roughly $18 million. Meanwhile, a mile away, majestic St. Ann’s, a Gothic beauty in danger of demolition, could be restored for the cost of a scoreboard.

As a sports fan and pastor, I recognize the ironies and incongruities wrapped up in these comparisons, as well as the insanity. For my part I rarely attend pro sporting events. They cost too much and take too long, ever since three-hour games morphed into full-day “fan experiences.” Yet I contribute to the mania in my own way whenever I watch a game on TV, listen to sports talk radio, click on a fan website or open the ESPN app.

It saddens me when a mother tells me her daughter has to miss Sunday Mass to play basketball. It astounded me as a chaplain at a Catholic university when games were scheduled not just on Ash Wednesday but on Good Friday.

It’s impossible to imagine the trend in sports salaries and stadiums continuing at this rate. In 2069, will average athletes make 625 times as much as teachers? In 2119, will we be spending 150,000 times more on new stadiums than on new churches?

At some point fan bases, taxpayers, PTAs, college presidents, politicians and community organizing groups will recognize this can’t, or shouldn’t, go on. Someone will do the social analysis and introduce a financial or moral corrective to the trend. But it probably won’t happen until priests like me are willing to stay for the entire youth group meeting — even if it means not getting to Mom’s house until the third quarter.

Father Jud Weiksnar is pastor of Ss. Columba and Brigid Roman Catholic Church in downtown Buffalo. He was profiled in the summer 2008 issue of this magazine.