If you were an academic, however, you probably would rain on my anecdotal parade. Academics are not big fans of anecdotal evidence, the use of a few examples to make a general claim. They prefer a more scientific analysis — something that can be investigated — and often want their evidence in the form of mathematical models, statistics that can be run through an algorithm or set of rules which gives them a sturdy basis for making pronouncements. (How do I know this? I just do.)

September 22-25 was the second annual Digital Week at the Hesburgh Library, an event “showcasing the best of digital teaching, learning and research taking place in Notre Dame.” So on Thursday I headed out of the office to the library’s Center for Digital Scholarship for the “New Technologies, New Knowledge” session. It would be interesting, I thought, to see what some of the University’s best and brightest academic minds were working on. 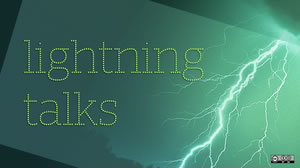 The lightning talks showcased eight graduate students and postdoctoral fellows presenting their current projects, with a focus on “new digital technologies and/or computational approaches to research.” At the end of all the 5-minute sessions, I was pleased that the topics were not as esoteric as I feared they might be. From preserving the privacy of participants’ data on the computer to measuring indicators of democracy, which might help agencies and others learn the impact of their assistance programs, to expanding creative writing through the use of technology, the participants gave me an idea of the diverse thinking happening throughout campus.

But I also learned an important lesson, starting when Claire Bowen, a doctoral candidate in the department of applied and computational mathematics and statistics, kicked things off: A humanities major such as I really doesn’t understand algorithms.

As the participants talked, they frequently flashed complicated mathematical formulas on the oversized screen behind them, proofs of the general statements they were making. It was, I fear, all Ø to me.

But that’s digital academics at Notre Dame. As poli sci doctoral candidate Fernando Bizzarro noted in his light “How to do it, really?” section on measuring democracy, the team aggregated 400 different indicators to reach its results.

There’s no messing around with these Ph.D. folks. If you’re going to say it, you’re going to prove it. And one of these days, if you should hear that a Notre Dame doctoral grad has discovered that the rain really does fall mainly on the plains in Spain, you can bet they have the digital data to back that up.