Frederick Franck was an extraordinary man — an oral surgeon, sculptor, author of more than 30 books and an artist with work in the Museum of Modern Art and the Whitney. He served with the humanitarian doctor Albert Schweitzer for three years and was deeply invested in Buddhism and spirituality. Born in the Netherlands in 1909, he moved to the United States in 1939, and one fall day in 1962 he embarked on an extraordinary plan — but it wasn’t really a plan at all.

Franck, then in his early 50s, was reading The New York Times and came across Pope John XXIII’s opening address for the Second Vatican Council. So moved was he by that text that he felt an overpowering impulse to draw the affair. So irresistible was that calling that he dropped everything and immediately flew to Rome.

Franck, not Catholic, would become the only artist to attend all four sessions of the Second Vatican Council, capturing in lively pencil and ink sketches the settings, scenes and religious leaders who participated in that watershed convocation that dramatically altered Catholic life. 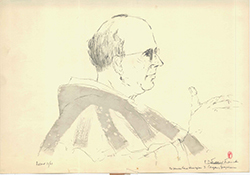 Vatican II concluded 50 years ago and an exhibit of his freehand documentation, “Outsider at the Vatican,” hangs at Notre Dame’s Center for the Arts and Culture through September. Sponsored by the Cushwa Center for the Study of American Catholicism, it is part of the University’s year-long 50th anniversary observance.

The council, convened by Pope John XXIII, was attended by some 2,800 bishops as well as lay persons and clerics of many faiths to help bring the Catholic Church into dialogue with the modern world. The council, perhaps the most important religious event of the 20th century, produced 16 official documents that radically changed Catholicism and deeply shook many of its faithful.

But what most intrigued the artist was the ongoing conversation and the humanity of those engaged in the meetings, talks and off-line deliberations that took place late into the night in corridors, corners and private quarters.

Catherine Osborne, a Cushwa post-doc and the exhibit’s curator, explained at a reception September 9 that Franck was deeply moved by the level of earnest theological and spiritual examinations taking place, by the process and personalities, and by the respectful dialogue among people of goodwill. And those conversations, she said, were not intended merely for Catholics, but for the human race throughout the modern world.

Franck, who later explained that he “learned to draw at a gallop,” drew a good many faces — of bishops, cardinals and the theologians hashing out differences and commonalities. In addition to notable cardinals and archbishops and leaders of various religions and religious orders, there are studies of Karl Rahner, Hans Kung, John Courtney Murray, Yves Congar, Msgr. Pietro Pavan, the author of Pacem in terris, and a dozing Cardinal Francis Spellman.

Osborne identified Franck as a portraitist, not a caricaturist, although his seemingly simple, quick-hand sketches are sometimes playfully animated and typically long on interpretation and artistic license. Portraits of John XXIII, whom Franck revered, are perhaps the most memorable, although one sketch of Paul VI, who presided over the council’s final three sessions, is noteworthy for the thickety eyebrows.

But Franck was also a scene setter with an editorial bent. One of his first sketches was of rotund, ceremonially attired prelates leaving by their limousines. At the bottom of the sketch the artist wrote, “The church of the poor.”

Another shows a congested, energetic party of clerics, with Franck’s note: “the bar nobody photographed.” Exhibit materials explain that while debates took place in the nave of St. Peter’s, two lively coffee bars were located on side aisles behind a grandstand. One was called “Bar Abbas” and the other “Bar Jonah,” the biblical patronymic of Simon Peter, the first pope.

The two sites, off limits to photographers, provided refreshments and a place to exchange information and strategy. A Protestant observer to the council, Robert McAfee Brown, once wrote that “the best place to track down rumors was at one of the coffee bars, which opened every day at 10:30 a.m., just when people were beginning to get restless or the speeches were beginning to get repetitious.”

The exhibit materials also note that women — quite scarce at the proceedings altogether — were not permitted in these bars. When they were finally admitted to the council as observers in 1964, a third area was set up and was immediately given the nickname, “Bar Nun.”

Franck also drew a kitchen scene staffed by male attendants, although the story goes that the kitchen was in reality manned solely by nuns.

Franck presented the gathering with all the seriousness it deserved but sometimes with a friendly wink. But more than that, he had the eye of an artist who saw real people talking, engaged and interacting and drew into their faces their character and humanity. The artwork is really an amazing achievement of historical significance and insight — the recording of the players behind aggiornamento — and done with minimal lines of graphite and ink and occasional swatches of muted pastel.

In concluding her remarks Osborne asked those in the gallery to spend time with a single drawing, looking closely, and to see the human there. She also advised, as a final point, that to look closely at the artwork is to enter a love story, one that can be traced to the day Frederick Franck first read Pope John’s words in The New York Times and grew throughout his days in Rome.