A man with a tweed jacket and weathered face works from a stately brick building on South Bend’s West Side. The refurbished building feels far from Notre Dame, but Joe Segura and his art studio are central to a new outreach effort by the University.

The Segura Arts Studio and its lithographic printing presses were purchased by Notre Dame and moved to West Washington Street last year, part of the University’s new Center for Arts & Culture. The Office of Community Relations, Notre Dame’s primary liaison with its many neighbors, moved into the center, too. By bringing these different parts together, the center aims to use art and community programs to engage with diverse groups off-campus, around Michiana, and beyond. 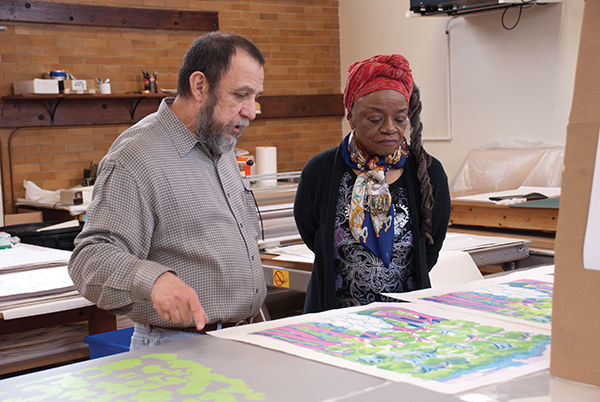 Studio founder and director Joe Segura has been at it for decades now, one of the most established master printers in the country. But he wouldn’t have been voted “Most Likely to Start an Art Business.” The quiet leader grew up in Sterling, a northern Illinois steel town. When the mills there closed, Segura and his Mexican-American parents, who ran a bar, were among the few Latinos who remained.

One of Segura’s aunts made sure he got exposed to science, history, culture and the arts in nearby Chicago. Every summer she took him to museums, frequently the Art Institute. Segura’s art education continued at Southern Illinois University, where he earned a master of fine arts degree, and at the Tamarind Institute’s master printer program at the University of New Mexico.

In the Southwest, Segura found more Latinos in leadership positions than he’d ever seen. Still, he saw that his community was underrepresented among artists, and he developed a mission to work with groups that are generally outside the artistic mainstream.

Segura launched his own printmaking studio and ran it for more than three decades in Arizona, but Notre Dame lured Segura back north to the same kind of post-industrial environment where he’d grown up. The vision was to bring his artistic mission to a new location, while drawing diverse international artists and local community members to the University.

Local schoolchildren tour the relocated studio often, and the center also hosts an afterschool program for students from Dickinson Intermediate Fine Arts Academy, a local magnet school. Segura’s face softens as he thinks about the students. “I have these flashes,” he says. “I see myself as a young kid, wide-eyed and not totally believing I could be educated or an artist.”

When he was director of Notre Dame’s Institute of Latino Studies, sociology Professor Gilberto Cardenas ’72M.A., ’77Ph.D. hatched the idea of bringing a print studio to the University. As a longtime patron of the arts, Cardenas knew printmaking was important, especially to minority communities, because pricing for prints is often more accessible than for single works.

Cardenas also knew Segura — everyone in the art world did. “He had a top-rated print studio, highly respected and highly admired throughout the country,” the professor says. He persuaded Segura to let Notre Dame bring the presses north. It took several years to raise the $2.8 million for the building and its new contents from donors that included the St. Joseph County Community Foundation. But in 2013, the center opened its doors.

For the University’s goals, Segura was a perfect catch. His studio fits nicely into the Notre Dame Center for Arts & Culture’s charge for diversity. The center also contains an art display space called the Crossroads Gallery that, along with the University’s Office of Community Relations, works to develop closer connections between minority groups and Notre Dame. “Community Relations brought a tremendous amount of vibrancy to this,” Cardenas says. “I’m really pleased.”

Together, the center’s three units make an ambitious trio. And they all fit within the University’s most recent strategic plan, “A Legacy Expanded.” Its fifth pillar is external engagement, with a goal of “engaging in external collaborations that extend and deepen Notre Dame’s impact.”

Segura says local minority groups haven’t always felt as though they were invited into the University. So he plans workshops and other events to help draw residents into the studio and center. “I hope people learn that we’re here for them.”

South Bend artist David Allen lives only three minutes from the center. The neighborhood, he says, appreciates that Notre Dame renovated a beautiful building that might have sat vacant or been torn down. “They’re doing a huge service,” Allen says. “Any university is always in danger of being looked at as insular or unfriendly, and Notre Dame certainly can’t be considered that when they did a project like this.”

The building is South Bend’s former Children’s Dispensary, a long-treasured community resource built in 1925. Its location in the middle of a heavily African-American neighborhood, with a Latino one not far away, underlies the center’s mission. “This center is in a really good spot,” says Doug Franson, the studio’s assistant director.

Franson knows people in every department and institute at Notre Dame, and his job is to connect them with the studio. He’s full of plans for first-year seminar courses with guest artists and studio visits from Notre Dame students.

When celebrated African-American artist Faith Ringgold came to town in February, Franson arranged her class visits and guest lectures. He even brought his 12-year-old daughter, Lauren, to meet her. Lauren had studied Ringgold’s books at school, especially during Black History Month. Now she has a framed photo of herself with the artist. “It’s fun to see how the faculty and students connect with the artists and the community,” Franson says.

The 83-year-old Ringgold has been at work for 60 years now, documenting the changes in American society from civil rights onward. She came to Notre Dame to make an edition of 60 original lithographic prints. The reborn Segura Arts Studio had to prove itself.

Warm sunlight diffused itself through the studio’s high, glass-block windows and jazz played from an iPod on the day when work on Ringgold’s prints began. Despite the soft light and sound, the air carried a charge. As Segura watched intently, printmakers Jessica O’Hearn and Jill Lerner moved quickly, coating aluminum plates alternately with water, oil, paint and gum arabic.

“When the artist is here,” O’Hearn started quietly. “This is the moment,” Lerner finished. “We need to show that the studio is capable of doing whatever the artist wants us to do.”

Even many artists don’t know how to make lithographic prints. The time-consuming 200-year-old process originally required limestone tablets. Today it uses aluminum plates. Nearly everything else remains the same. De Kooning, Picasso, Dalí and Miró made printmaking part of their work, but they were the exception, not the rule.

To start a print series, an artist draws on a series of plates with a grease-based litho pencil — a different plate for each color to appear in the finished print. Each plate is processed with gum arabic and acid and printed by sponging with water and rolling with ink. The greasy pencil lines attract ink to the spots the artist envisioned. The water repels the oil-based ink from the rest of the print.

The printers then send each plate together with the paper through a press that applies 1,200 pounds of pressure per square inch. Every print takes creative, exacting work on the part of the printmakers and the artist to make sure each one is identical, so all 60 copies in each official print series are considered originals.

Ringgold’s sojourn was the center’s splashiest artist visit to date. Her work appears in such museums as the Guggenheim and the Museum of Modern Art. Oprah Winfrey, Denzel Washington and other celebrities own her pieces. Yet her popular children’s books have kept her art approachable and known to more than just the aficionados.

Her public lecture at the Snite Museum of Art was a huge hit, crowded with fans who ranged from children to the elderly. But a lecture was one thing. The Segura Arts Studio had to produce Ringgold’s print flawlessly.

Lithographic printmaking takes so much time because each color has to be rolled through the press separately. After O’Hearn and Lerner had added all eight colors to the print, some white space was left unpainted along the edges. Ringgold didn’t want that. They had to go back and start the entire process again.

On St. Patrick’s Day, three weeks after Ringgold departed campus, O’Hearn and Lerner were working hard to finish her prints. Joe Segura supervised with his quiet focus, making sure the process went smoothly. Would they celebrate with an Irish beer? Lerner’s drawn face said no. “Maybe in green sweatpants,” she deadpanned.

The prints in the edition would dry on a special rack for three more weeks. Then another artist would come, and the Segura Arts Studio and the Notre Dame Center for the Arts & Culture would start all over again — engaging with a new artist, inspiring another group.

Lynn Freehill-Maye, the former editor of The Alcalde, the University of Texas at Austin’s alumni magazine, is now a South Bend-based freelance writer.