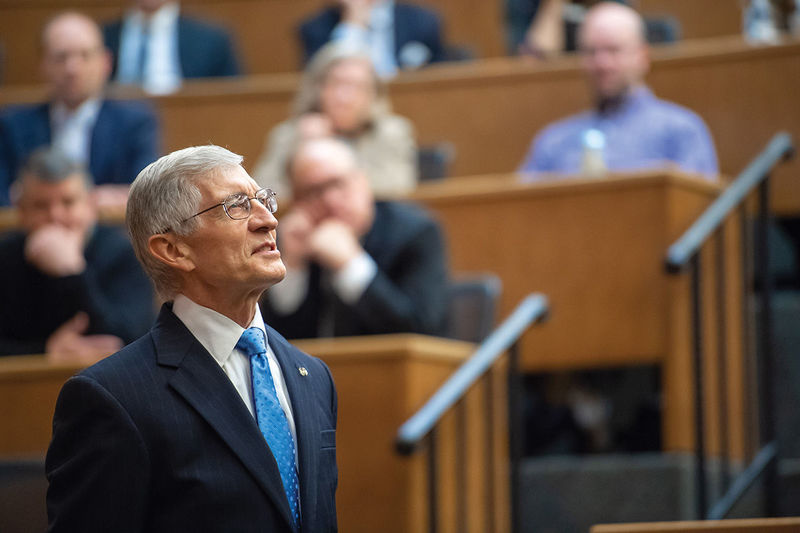 It’s not an exaggeration to say that Thomas G. Burish ’72 has transformed Notre Dame. Burish himself might deflect credit to numerous others who have had a hand in the University’s academic evolution during his 14-year tenure as provost. And, fair enough, many minds have been at work. The vision, though, has been his.

Burish announced this summer that he will step down as the University’s Charles and Jill Fischer provost on July 1, 2020. A partial list of his major initiatives hints at the impact he’s had since he took the job of Notre Dame’s chief academic officer in 2005.

Notre Dame International: The locus of all Notre Dame efforts abroad — management of undergraduate study and faculty research, support for international students on campus, stewardship of Global Gateways in Beijing, Dublin, Jerusalem, London and Rome, and six other centers in Latin America, Asia and western Ireland.

Harper Cancer Research Institute: A partnership with the Indiana University School of Medicine-South Bend that promotes innovative, multidisciplinary research that attacks cancer in its many forms and vast complexity.

Keough School of Global Affairs: Notre Dame’s first new school in nearly 100 years, combining research, policy and practice expertise from nine institutes under a single umbrella to maximize the impact that faculty, students and alumni have on human development around the world.

Burish has also overseen an increase in annual research spending from $79 million to $212 million. Investments in the Graduate School have more than doubled, leading to the addition of 15 graduate programs and a 25 percent rise in graduate applications.

Undergraduate minority and international students made up less than one-quarter of the student body in 2005; now they represent more than one-third. Need-based financial aid has expanded from $60 million to $154 million.

The distinguished clinical psychologist and cancer researcher, who previously spent a decade as Vanderbilt University’s provost, left the presidency at Washington and Lee University to become the second-ranking administrator at his alma mater, a choice he looks back on with fondness.

“In a career filled with countless blessings,” he said, “serving the Notre Dame family is a gift which has given great meaning to my life.”