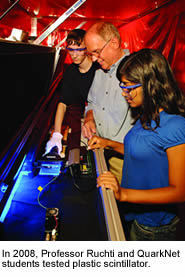 Subatomic particles moving so fast, they could go around the Earth more than seven times in a single second.

Particle accelerators so large that 13 copies of the Notre Dame campus could comfortably fit inside them.

Temperatures about five billion times hotter than the center of the sun.

These mind-blowers are just some of the things that Notre Dame physics Professor Randy Ruchti describes as he paces in front of a classroom full of wide eyes and rapt attention. You’d expect a professor at a leading particle physics research institution to talk about these ideas with his graduate students, but his audience today is much younger. Some are too young to drive and one lad’s voice occasionally cracks as he asks his questions.

Ruchti believes that the best way to turn kids on to science and research is to introduce them to it early in a big and impressive way. And, like many people with a mission, he didn’t just believe. He’s done something about it.

In 1999, the National Science Foundation decided to fund a proposal to match high school teachers with university-based physics researchers across the United States. The goal was to improve the public visibility of the Large Hadron Collider, which would power up near Geneva, Switzerland, in 2008 as the world’s largest particle accelerator. The educational partnership between researchers and teachers included Ruchti’s vision of heavy student involvement and became known as QuarkNet.

QuarkNet is essentially a grand pyramid scheme, albeit one designed to funnel knowledge to teenagers, rather than money to Bernie Madoff. Today about 50 QuarkNet centers are located at universities spread across the country. Each one is led by at least one senior researcher who works with a group of roughly a dozen local high school physics teachers. Since each teacher has more than 100 students, QuarkNet winds up reaching as many as 100,000 students each year. Over the project’s history, an estimated one million kids have learned from world-class scientists about protons, neutrinos, the enigmatic Higgs boson and how particle accelerators might actually create the dark matter that governs the motion of the galaxies as they twirl throughout the cosmos.

“As a scientific researcher, you never know when you are going to hit something big in an experiment. QuarkNet itself has been an experiment, partnering traditional university researchers with nontraditional researchers, who are high school teachers and students,” Ruchti reflects. “Would it work? Beyond my wildest dreams — and I have these often. Most particle physics research groups in the country have been significantly impacted by QuarkNet, and we can’t keep interested teachers and students away. The partnership is here to stay.”

Getting a QuarkNet center up and running takes three years. In year one, two high school physics teachers receive an eight-week summer research appointment to work with a physicist at a local university. They learn some particle physics and survey what curriculum is already available to bring to their classroom. When they return to their classrooms in the autumn, they recruit another 10 teachers to join them the following summer. During the year they start to sprinkle particle physics into their classes.

In year two, the new teachers participate in a three-week, investigation-based summer training institute. By year three, they have many options available, from bringing cosmic ray detectors into their school for students to explore, to giving the students access to data taken at the Large Hadron Collider. Students may pursue paid summer internships to do research with the professors. By this time, the teachers have sufficiently mastered particle physics to be able to turn their considerable education skills toward generating additional curriculum, which is then disseminated to other QuarkNet centers.

Ruchti is by no means the only person involved in running QuarkNet. The project now has five principal investigators and half a dozen project staff. The U.S. Department of Energy joined the National Science Foundation in funding the project, which has an annual budget of $1.6 million. Notre Dame hosts the administrative center for the NSF funding and four of the principal investigators are or have been ND faculty.

While the raw numbers of QuarkNet’s successes are impressive, the experience is a more personal one for most of the university mentors — including me. Each of us is passionate about science and about giving kids an early exposure to the kinds of frontier research that drives us. For many years, I was the QuarkNet mentor in Fermilab, America’s foremost national laboratory dedicated to particle physics. I would meet with my group of teachers from the Chicago area and share all the insider scuttlebutt on what was going on in particle physics research. We developed educational materials they could take back to their classrooms. Occasionally, I would go to a high school and talk directly with students.

The most satisfying experiences occurred when I invited the students to work in my laboratory in the summer. These kids were amazingly bright and incredibly enthusiastic. Depending on their skills and interests, I would have them testing electronics, programming or even analyzing data.

One Chicago area student, Paul Bierdz, worked with me on a study of particle collisions that were producing a pair of bottom quarks. I had a hunch that this might be a promising class of collisions in which to find new physics. Bierdz, then between his junior and senior year of high school, showed me some plots he was making and said, “This doesn’t look right to me.” Sure enough, he had found a bug in our analysis code that would have invalidated the result. It took two weeks for us to recover, and we senior researchers were grateful for the observation.

Bierdz and I have kept in touch, and he is now a graduate student in physics at the University of Michigan. He speaks highly of that summer. “The QuarkNet program was meant to give young, aspiring scientists a chance to explore the limits of human knowledge and know which frontier they’ll explore. I am thankful for having taken part in the unique experience.”

Other protégés of mine have gone on to graduate school in astrophysics at other noteworthy universities. My experience is quite common. Many QuarkNet students have pursued graduate study, with one of the first just about to complete her Ph.D. in mathematics. The opportunity to interact with inquisitive young minds is a driving motivation for the researcher mentors and certainly is one of our chief rewards.

The future of particle physics is bright. The Large Hadron Collider is expected to run for the next two decades. The QuarkNet generation will be able to explore an entirely new frontier. Program spokesperson Marjorie Bardeen, Fermilab’s education office manager, has high hopes. “Being part of QuarkNet means being part of the particle physics research community. This is heady stuff for high school teachers and students alike. As the field moves into an exciting era of new discoveries, it is particularly satisfying to bring a new generation of physicists along.”

Don Lincoln is a senior researcher at Fermi National Accelerator Laboratory and an adjunct full professor at Notre Dame. He is a former Fermilab QuarkNet mentor and author of two books about particle physics for the general public, including his recent The Quantum Frontier: The Large Hadron Collider, which has now been translated into three languages.

Learn more about QuarkNet and how physics teachers can get involved at quarknet.fnal.gov.