In the spring of 2012, Professor David Murphy took a few dozen aspiring entrepreneurs on a tour of South Bend’s Union Station, which houses computer servers and a range of high-tech businesses. 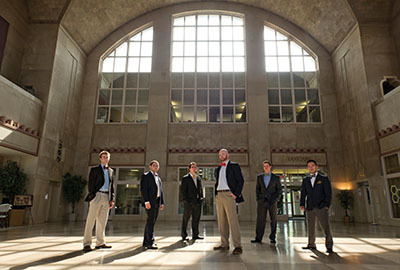 Seeing budding potential and bustling product in quick succession inspired the students to ask whether they could help South Bend emulate Durham’s transformation. That idea snowballed into enFocus, a nonprofit talent incubator that offers ESTEEM graduates a one-year fellowship working with clients, from the city and public transportation to schools and hospitals. Kevin Smith ’78, the owner of Union Station, donated office space in his building and the services of a consulting manager. Mike Bieganski, a former Bosch executive, offered office equipment. And local developer David Matthews created a loft-style community apartment for the fellows at his Emporium complex on the St. Joseph River.

Each enFocus fellow leads a project, with a local business leader as a mentor. The community in turn reaps the benefit of talented and motivated consultants at an exceptionally low price.

In the first year alone, enFocus’ seven consultants were able to identify $3.2 million in unrealized savings opportunities within public funds. These ranged from an optimization of the city’s solid waste fleet that could save up to $500,000 to an analysis that helped the Notre Dame Federal Credit Union receive a beneficial designation for serving a low-income community. The enFocus program was so successful that in 2013 it won a $3 million grant from the Eli Lilly Foundation to help it grow and replicate throughout Indiana over the next five years. Turning the area’s brain drain into brain gain, the program’s retention rate over two years has been 75 percent, with some fellows turning down jobs at tech giants on both coasts to stay in South Bend. Some hope to open new businesses, one has become the program’s executive director and another has become the city’s chief innovation officer.

Expansion plans call for the program to relocate from Union Station to Studebaker Building 113, a two-story structure in Smith’s “Renaissance District” that will be renovated before the much larger former auto assembly factory to which it’s attached.

Brendan O’Shaughnessy, who works in communications for Notre Dame, is a former teacher and Indianapolis Star reporter.