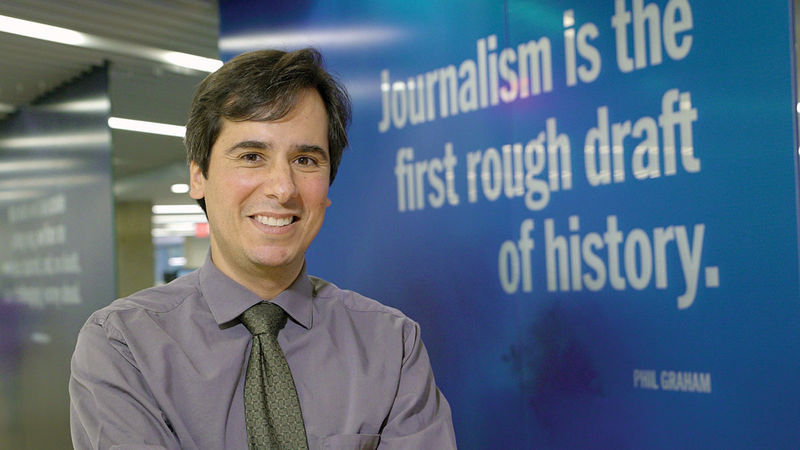 Carlos Lozada ’93, the nonfiction book critic at the Washington Post, was a Pulitzer finalist when we wrote about his “American Political Journalism” class in 2018. This year, he took the top spot, earning the 2019 Pulitzer Prize in criticism “for trenchant and searching reviews and essays that joined warm emotion and careful analysis.” Our latest Questionnaire delves into the reviewer’s work.

How do you define your role as a nonfiction book critic?

I try to define it as broadly as possible. Given the political moment we’re experiencing and the fact that I work at The Washington Post, I’ve definitely been writing a lot about political books, but I try to range widely within that category. That means going beyond the campaign books and the policy debates and all the inside-the-White-House volumes that are coming out, and instead grappling with works that are trying to explain the cultural and social and historical forces that have brought us here. Through that lens, a history of the arms industry in America can be a political book. A study on the technology behind protest movements can be deeply political. The memoir of a Border Patrol agent is political, too.

In a practical sense, that means I strive for a balance between reading significant books that are coming out throughout the year and choosing big themes that I am personally interested in and finding a way to interrogate them through books. That could mean finding old books that are newly relevant, or reading several books on a related subject and trying to put them all together. Last year I wrote about bigger themes like truth and anger and identity, but also about new books on the 2016 race and Washington memoirs like James Comey’s A Higher Loyalty. That mix keeps the job varied and fun.

Which nonfiction books have been the most insightful about the current era of American political life?

There are several recent books I’d point to. Yuval Levin’s The Fractured Republic (2016) is a truly thoughtful work on how the conservative movement, so torn right now, can regroup around a stronger sense of community and with a greater focus on the local, mediating institutions of civil society — not just the obvious levers of national power. Evicted (2016), by Matthew Desmond, is an astonishing and unforgettable look at inequality in the American city, focused around housing. Down Girl (2017) by Kate Manne offers essential context for understanding the forces of gender injustice. Stamped from the Beginning, by Ibram X. Kendi, won the National Book Award in 2016, and deservedly so, for its relentless exploration of racist ideas in American history. Sarah Smarsh’s Heartland (2018) is not just a poignant memoir but perhaps the most clear-eyed of the books obsessing over the white working class right now — and it offers a sharp counterpoint to J.D. Vance’s Hillbilly Elegy (2016), which I think got too much attention as a supposed explanation of the Trump voter. Francisco Cantú’s memoir, The Line Becomes a River (2018), grapples honestly and painfully with U.S. policy on the border.

There are also older books that speak to this moment; I’m thinking of Samuel Huntington’s American Politics: The Promise of Disharmony, published in the early 1980s but eerily prescient for our times. And I’d encourage people to read the Mueller report, which I think will go down as a something of a time capsule from this era.

What books have most shaped your worldview?

For that I suppose I’d have to be able to articulate a coherent worldview! That’s not always easy. Different books hit you at different moments throughout your life, and books that seemed essential at one time now feel less so, or vice versa.

As a kid, I read a lot of U.S. historical fiction, especially the John Jakes bicentennial series, which probably gave me an overly romanticized vision of America’s evolution and progress. In my political science classes at Notre Dame, I encountered the writings of Albert Hirschman, which definitely left a mark. His essay “The Search for Paradigms as a Hindrance to Understanding” was just mind-blowing for me as an undergraduate, awakening me to the risk of letting imposed frameworks get in the way of insight and narrative. I still have a copy of that essay at my desk at the Post. This Republic of Suffering by Drew Gilpin Faust made me alive to the enduring human costs of war, and shaped how I see the legacy of the Civil War. And it is impossible to read the fiction of Mario Vargas Llosa — novels like La ciudad y los perros and La fiesta del chivo — and not come away with deep reservations about the concentration of power and abuses against individual agency and liberty.

Of course, there are the books I loved as a kid and just keep coming back to, especially with my own kids now. Harriet the Spy and The Long Secret by Louise Fitzhugh. The Great Brain series by John D. Fitzgerald. The Sherlock Holmes short stories by Arthur Conan Doyle. Agatha Christie stories. They all fed a sense of adventure and mystery — and just an early love of reading, which may be the most essential part of my worldview, for what it’s worth.

Are there enough readers in the age of internet-shortened attention spans for a book to make a meaningful impact?

I was on a panel recently at the Bay Area Book Festival where one of the other speakers made the simple and memorable point that, while it’s hard to identify books that “changed the world,” it is easy to find books that changed individual lives — just ask people. That said, I do worry about the decline of sustained reading in American life, and get annoyed when I hear the president of the United States casually declare his lack of interest in reading books. I think the publishing industry, especially when it comes to contemporary nonfiction, often follows and reinforces political tribalism rather than offering books that break through our political silos. There are exceptions, of course, but there is a lot of predictability out there.

I have so much fun doing that! During my train commute I usually walk through three or four train cars looking for readers, moving from one to another at different station platforms. Sure, a lot of people are scrolling through their emails or playing games on their phones, but seeing so many people reading books renews my faith in the reading public. I’m continually impressed with the range of subjects I see. Just in the last few weeks I’ve spotted commuters reading short stories by Chekhov and essays by Ralph Waldo Emerson, novels including Colson Whitehead’s The Underground Railroad and Rachel Kushner’s The Mars Room, as well as biographies like Walter Isaacson’s Leonardo da Vinci and memoirs like Becoming by Michelle Obama. I also see folks reading some highly specialized nonfiction on everything from tax law to Middle East history, as well as tons of self-help, faith-based writing. And, of course, tons of fun genre fiction.

Such variety makes me want to range more widely, too — after all, these are the kind of people who also read The Washington Post. Maybe the best part is that I see people reading books that came out decades or centuries ago, and it encourages me not to be hostage to the new in my own reading and writing. The #RedLineReaders — that’s how I tag them on Twitter — remind me that the best way to understand the moment and imagine the future can be by getting a better handle on the past.