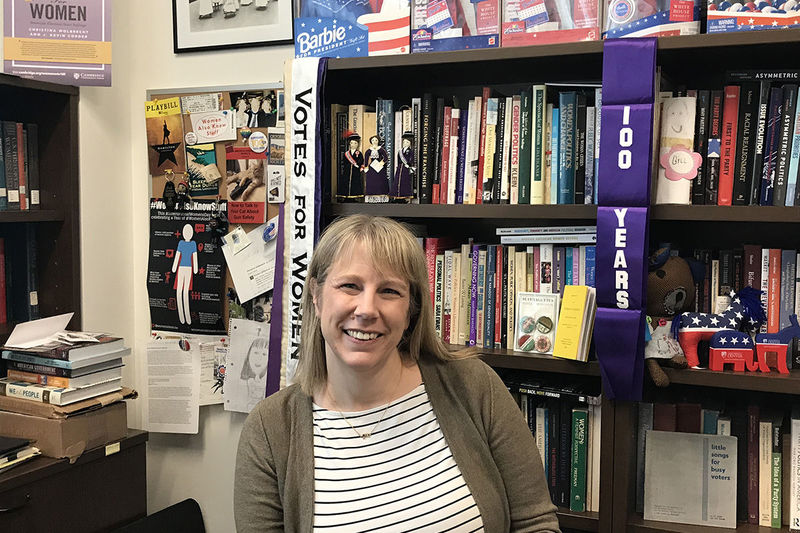 It was a century ago that the 19th Amendment to the Constitution was ratified, extending voting rights to American women. Notre Dame political science professor Christina Wolbrecht examines data from 100 years of women’s suffrage in her new book, A Century of Votes for Women: American Elections Since Suffrage, co-written with J. Kevin Corder of Western Michigan University. In the interview below, Wolbrecht, director of the Rooney Center for the Study of American Democracy and the University’s Washington, D.C., program, discusses key findings from her research, emphasizing that the analysis shows “women are not a voting bloc,” even if political messaging still suggests otherwise.

In your book, you examine a century of data since the 19th amendment was ratified and you draw conclusions about women's voting patterns over time. Based on your research, what is the biggest takeaway regarding American women and voting?

In the same way that there is no ‘man’ voter, there is no ‘woman’ voter. What we see across every time period is that women are diverse and they’re shaped by their religious traditions, by their race and ethnicity, by their social class, by their educational attainment, by their experiences with marriage or with employment or with children. All those things shape the behavior of men and women as voters. The key takeaway is that certainly gender matters. Women act politically as women, but at the same time, women don’t act as some sort of unified group or sisterhood.

What discovery surprised you the most while you were doing the research?

How consistent the ways in which politicians and parties and journalists have thought about women voters over this hundred-year time period. You could argue that this is one of the most transformative periods for women in terms of social roles, expectations, educational attainment, work outside the home and all these sorts of massive social changes that we have experienced. And yet when women first came nationwide into the electorate in 1920, politicians tried to appeal to them on the basis of their roles as mothers. They talked about child labor, and they talked about maternity and infant health, and they talked about keeping food safe. It was all very much this mother role. And here we are 100 years later and we’re still talking about appealing to soccer moms or waitress moms or hockey moms. We’re still assuming that gender really drives women’s electoral behavior.

You write that not a lot is known about women voters in the early years after they gained suffrage, because there weren’t yet exit or public opinion polls. Can you speak in general terms regarding what is known about early women voters and whether in the 1920s women’s suffrage was considered a success or failure?

You would think a hundred years later that, of course, we know how women voted after suffrage. But we don’t put pink and blue ballots in the ballot boxes. And we didn’t have very reliable surveys at that time to tell us how men and women voted, which is what we rely on now. On the whole, women and men voted very similarly in the ’20s and ’30s. Where men’s turnout was higher, women’s turnout was higher. Where men tended to vote Republican, women tended to vote Republican. I don’t mean that men are somehow the standard against which women should be judged. What I mean to say is that, after a 70-plus year struggle, all the evidence is that women were at least as capable as men at understanding the political world and making choices about it.

There was, early in the ’20s, a popular conventional wisdom in major magazines and newspapers that women’s suffrage had been a failure. That women did not turn out as much as men did and, when they did, they just voted like their husbands did. George Gallup, the early innovator in polling, has a line where he says you basically under-sample women (in polls) because he didn't need to figure out how they voted. His answer was, ‘We know how they voted. How ever they were told the night before.’

There were lots of things holding women back. There were a lot of strict electoral laws like poll taxes, literacy tests and long registration periods. Those laws were designed to basically discourage voting among people of color, black Americans in the South and immigrants in the Northeast. They also were especially bad for women in general. If your family has to pay a poll tax and can’t afford to do it twice, probably the man’s going to get to vote and not the woman.

The 2016 presidential election featured the race between Hillary Clinton, the first woman nominee, and Donald Trump. Many people expected a huge gender gap when it came to voting, but what actually happened?

It was one of the most unusual presidential campaigns in American history — on a whole lot of levels. You mentioned the first woman presidential (nominee) and the other candidate had no previous military or political experience. These are just unusual things in American history. Then on Election Day, everybody showed up and the election was generally very normal. (Women voters preferred Clinton by a 12-point margin in 2016, only one point more than President Obama’s advantage over Mitt Romey in 2012 and slightly less than Obama’s 13-point edge with women against John McCain in 2008, according to the Pew Research Center.)

In your book, there’s a phrase that appears in numerous chapters: “Women are not a voting bloc.” What do you mean by that and what is the importance of emphasizing it?

When we talk about women as a voting bloc, we do a disservice to women as citizens and as voters. It gives the impression that womanhood itself, some sort of set of special values or concerns drives women’s votes, explains women’s votes, and that all women or the vast majority of women have the same political preferences. There’s simply no evidence for that.

Based on your research, what are your predictions for the 2020 presidential election?

Let me start by saying that 2016 was very humbling for political scientists, although probably not in the way people think. I don’t mean that the polls were wrong, because the polls weren’t wrong. I mean that if you had been a student in my Introduction to American Politics class in the fall of 2015, I would have told you Donald Trump will never be the nominee. Because that’s not how nominations work in the United States — the party doesn’t want him, etc. Clearly, that was not true.

How interested is the current crop of Notre Dame undergraduates in what’s going on politically in our nation?

I’ve taught at Notre Dame for more than 20 years and I’ve never seen anything like this. Students asking more questions in class, students coming to office hours not for help with a paper, but because, ‘You said X or Y in class and I want to understand what’s happening in my state or in my community.’ Those are amazing conversations. There are more students in classes, more students in other majors who just want to study whatever they’re studying, but also feel like they have an opportunity to try to understand.