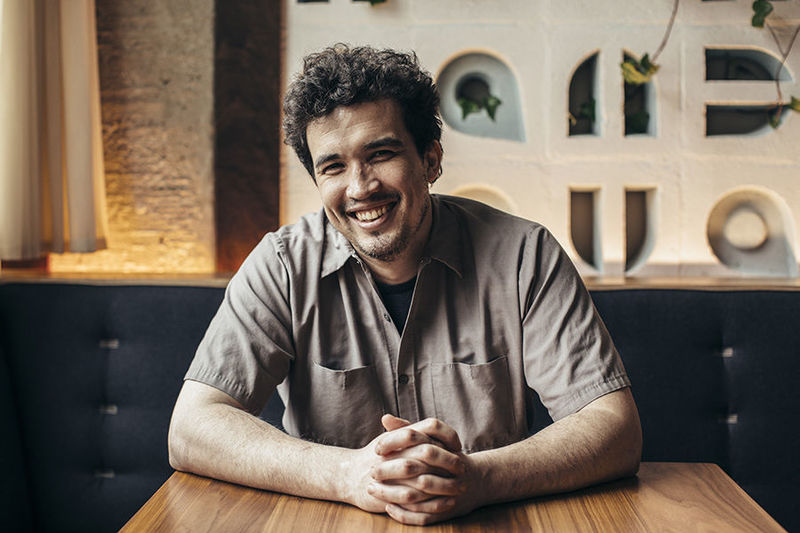 You’ve moved from the small-plates restaurant avec to the Italian-centric Nico Osteria, then left Nico to open Pacific Standard Time, and most recently added The Laurel Room to your resume. Walk me through those big developments.

Well, the biggest development is I had a son. Pacific Standard Time would be the second-largest development. And then The Laurel Room — it’s great because it was small and digestible. The two operations before that [at 100-plus seats each] were so big, right? Like, Nico was massive. Pacific Standard Time was massive. It was nice to be able to open a nice, small little restaurant with a nice, small little kitchen.

At both Pacific Standard Time and The Laurel Room, the focus is on “California cuisine.” Why?

I’ve been cooking for, and now with, [One Off Hospitality Group owner] Paul Kahan for 15 years. We’ve essentially been cooking California food the whole time. We like to go to California to eat, and one of the reasons why is because there’s this blend of ingredients and cultures and a glorious lack of respect for the rules of cuisine that results in food that just kind of defies characterization unless you say it’s California cuisine. The person who said it best was [San Francisco chef] Stuart Brioza: “The California diner expects a level of cross-cultural conversation in their food.” He’s right. So that’s what we strive for.

I think what’s next is a desire to grow, no question, but also a desire — a requirement — to grow intelligently. It’s not like it was 15 years ago when you could just sign a great lease and start cooking and start making some money. You’re watching more restaurants close than open every single day. So I think what’s next is making the right decisions so that we put ourselves in the right place to succeed.

So many restaurateurs have a concept that they want to shove into a space. And that’s backasswards. You can’t take a classic, Craftsman-style house and suddenly make it into a stunning midcentury-modern living space. But a lot of times people try to do that in food. Like, if you find a cute little Prairie home, you should probably cook cute little Prairie-style food.

Were you always interested in being a chef but figured, “let’s do college first,” or did you develop the interest along the way?

It’s a longer story, but it certainly involves my father, who taught [musicology] at the University. He has three boys, and in our family you went to college, period, and in my dad’s portion of the family, you went to Notre Dame — if you got in. I didn’t necessarily know that I wanted to be a cook for sure, but it was the only passion that I had, even before college. And I really nurtured the intellectual part of that cooking passion in college because I was around such a great group of friends. We were philosophers — well, philosophy majors — and so we took the intellectual, or academic, philosophical process and applied it to food writing and talking about food and cooking.

So even though I have had no food education and Notre Dame offers no food education, in a very strange way it functioned as a cooking school for me — especially as a cookbook school. ’Cause [in our rental house on Washington Street] we were cooking out of great cookbooks, cooking a lot. We were making incredible discoveries and very important discoveries at college about food, and then talking about it.

I’m a creature of habit.

Interview by Sarah Cahalan ’14, a graduate student at Northwestern University’s Medill School of Journalism and a former associate editor of this magazine.