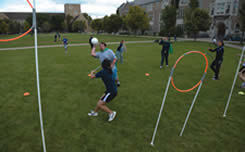 The old saw goes that truth is stranger than fiction, but what happens when the two are practically inseparable?

Take for instance the score of the September 27 campus Quidditch match between Gryffindor and Slytherin. Gryffindor squashed Slytherin 170-60, when Gryffindor’s Seeker snagged the Snitch to score 150 points and vault her side to victory. Soon after, Notre Dame Stadium scoreboard operator Ed Levy dutifully posted the final tally for fans attending the Purdue game along with other eagerly awaited sporting results from around the country.

Except he didn’t. Levy didn’t know a thing about the Quidditch game played that day at Stepan Fields. The score he posted was pure fiction — the final score of young Harry’s very first match as described in Harry Potter and the Sorcerer’s Stone. A computer guru who has operated the stadium board for the last four seasons, Levy always throws a just-for-fun report from an obscure Division III football contest into the cycle of scores streaming in from other college match-ups.

This time he had asked his daughter, an avid fan of the Harry Potter series of novels and films, for a score from Quidditch, the ethereal sport of wizards invented by Potter author J.K. Rowling. Levy floated the idea past some raised eyebrows in Notre Dame’s sports information office, saying, “Look, I don’t really get it either, but the students will.”

He was right, to a point. The Observer errantly reported the scoreboard oddity as a window into the novelty of the real, live Quidditch game played that day by a group of “Muggles” — non-magicians in Potterspeak, but in this case friends and Potter lovers from Knott and Pasquerilla West halls.

So, the question remains: Coincidence . . . or magic?

C’mon, says junior organizer Peter Mushenheim, don’t get carried away. He settles for “giant coincidence” when describing the alignment of his friends’ first crack at Quidditch and the sensational scoreboard report he guesses was plus or minus 20 points off the mark. “I forget exactly what we had decided the actual score was,” he admits.

Maybe the coincidence isn’t so big. After all, explains Elizabeth Ann Dillon, the joke among campus Potterheads is that Notre Dame is Hogwarts, the school where Harry receives his education and comes of age. Dillon’s generation grew up with Potter — “I started out younger than he was; I finished the series slightly older than he was” — and South Dining Hall is reputedly a model for Hogwarts’ dining hall in the films. (Spoiler alert: A BBC report says the true inspiration came from the University of Oxford’s Christ Church College. Sorry.)

Dillon says Quidditch first magicked its way onto campus last spring during study days when a group of seniors yanked the sport down from the skies and got their friends to play with them. They copped a set of rules, straddled broomsticks to simulate flying and fashioned the raised, three-loop goals found at either end of a Quidditch pitch out of hula hoops and PVC pipe.

Quidditch is a breathtaking, high-speed game played by two airborne teams of seven players: three Chasers, who try to pass a spherical Quaffle through the hoops; two Beaters, who use bats to try to bean the Chasers with smaller balls called Bludgers and knock them out of play; a Keeper who defends the goals; and a Seeker, whose job it is to catch the Snitch, an unbelievably swift and dodgy golden, winged thing. Goals are 10 points each, but catching the Snitch is worth 150 points and ends the game.

Muggle Quidditch as played at Notre Dame under the “slightly” modified rules of the Intercollegiate Quidditch Association (yes, this really exists) is, of course, unenchanted and earthbound. The Quaffle is usually a volleyball. The Beaters have to throw the Bludgers, rather than batting the self-propelled little nasties out of the air. Everyone has to keep those bloody broomsticks between their legs. And the Snitch is a yellow Ping-Pong ball, binder-clipped to a yellow-attired person — ideally a heavily recruited cross-country runner — who can keep a game going for half an hour or more while trotting around the pitch and away to other quads, exasperating the Seekers and attracting attention to the game.

By October, Quidditch was a fixture on the O’Shaughnessy end of South Quad every Friday after 3 p.m. One spectator described the sport as a combination of lacrosse, team handball and capture-the-flag. Dillon sees it more as a cross between basketball, tag, dodgeball and rugby.

The point is, it’s Quidditch.

Interest in the sport may have survived the spring, but the original broomsticks — “It can be a violent game,” Dillon allows — did not. So Dillon and her friends bought 14 wooden brooms manufactured as Halloween costume accessories at $2.50 a piece, created the obligatory Facebook group for fun and publicity, and invited everyone they could find to play.

Dillon’s group, the Quidditch Undergraduate Association For Fantasy-Loving Enthusiasts (QUAFFLE), isn’t recognized yet, but she says they have applied for club status with the Student Activities Office, which if granted would entitle them to badly needed funding.

For now, they’re free to set up and play. It’s no different from croquet that way, Dillon says. They attract a crowd, though QUAFFLErs insist that, despite the capes and the hoops and the galloping around South Quad on broomsticks, they’re “amazed” by the attention they’re getting.

And, yeah, they’ve taken some flack — mostly from sneering soreheads who thus far have confined their remarks to certain Notre Dame-obsessed Internet bulletin boards — but they’re not bothered by it.

Counters Dillon: “If their lives were really that exciting, would they be online bashing mine?”