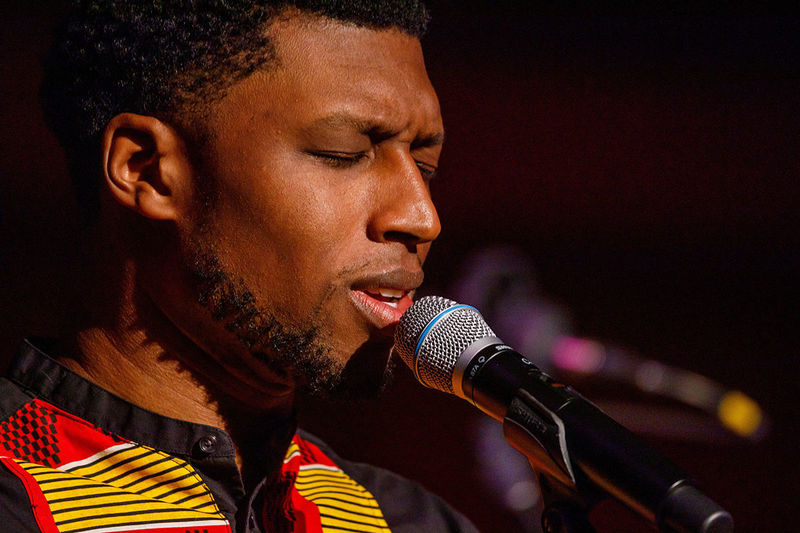 As a composer and a performer, Roberson bridges communities. Photo by Peter Ringenberg

Stop killin’ me and you’ll see

That I am more than you think

Not just some dog in the street

There’s something special in me.

Thus begins “Stop Killin’ Me,” a song Emorja Roberson ’17 MSM wrote last month amid ongoing protests against the police killings of George Floyd and other African American men and women. Roberson’s dark, plaintive melody articulates the violence and injustice that victimized Floyd and others before him:

I holler that I can’t breathe

Your knee drove deeper in me

And yet you felt my life depleting from my body

“Stop Killin’ Me” is not Roberson’s first song to resonate with current events. In March he released “He’ll Be With You,” a composition originally written in 2019 that he realized could offer comfort during the coronavirus pandemic.

Wondering where your life may go

Let your faith lead, let it guide you

And know Jesus will be with you.

The song struck such a chord that Tina Knowles, Beyoncé’s mother, shared it on Instagram.

Roberson’s success is a testament to the determination he has shown since he started performing. Growing up in DeFuniak Springs, Florida, he was “always intrigued” by the music at the weekly church services he attended with his mother. As a 10-year-old in 2001, he told a youth director he wanted to play the keyboard. She responded that he would never be able to do it.

“I remember feeling defeated before I even started,” Roberson says. Despite the discouragement, Roberson promptly went home, opened a book and began to teach himself to play. “I took that ‘no’ and I turned it into my ‘yes,’” Roberson says. “I’m now glad that happened, because it taught me how to respond to rejection. Within my career, taking those ‘nos’ just to get that one ‘yes’ is part of the process.”

At age 12, Roberson formed Voizes of Praize, formally known as DeFuniak Springs Youth Mass Choir, and in 2009 he received first runner-up in a vocal performance competition sponsored by The “Negro Spiritual” Scholarship Foundation. One of the judges — who happened to be a professor at the University of North Florida — offered him a full ride on the spot. Roberson received his bachelor’s in music from North Florida in 2013.

When Roberson arrived at Notre Dame for graduate school in 2015, he had a challenging transition. “I got to my first class on the first day and I noticed that I was the only student of color in the class,” an experience, he says, that turned into a source of motivation. “That was the moment I said, ‘I have to make a difference.’”

Roberson has since become the first African American to earn a sacred music master’s degree in vocal performance from Notre Dame and he’s working toward becoming the first to earn a doctorate in choral conducting. He has worked with five-time Grammy Award-winning opera singer Kathleen Battle and soprano Deborah Voigt on their visits to campus, conducted Notre Dame’s Voices of Faith Gospel choir in his arrangement of “Seek Ye First,” performed with the Notre Dame Children’s Choir, served as the graduate assistant for the Notre Dame Folk Choir and piloted the Voices of Courage choir at Madison Primary Center in South Bend.

Roberson also serves as music director for South Bend’s Olivet African Methodist Episcopal Church. Last year, he organized a Black History Month concert on campus called “Unsung: The Exploration of the Sounds of Black Folk,” which featured jazz, classical and gospel music. He invited members of the Notre Dame folk and liturgical choirs, Olivet AME and other local churches to participate. Roberson planned the performance for Black History Month “only as a beginning, because sometimes people can feel like Black History Month is the only time you can introduce this kind of style.”

His recording of “He’ll Be With You” is another way Roberson has tried to build a bridge between communities. The video features singers of diverse backgrounds from Notre Dame and Michiana. “I felt the visual was very important. I didn’t want just black, I didn’t want just white, and I wanted people who were other ethnicities as well,” Roberson says. “Because Notre Dame has not always afforded those images as it relates to music, I had to create a space that was inclusive.”

When asked what message he would like people to take away from “He’ll Be With You,” Roberson said, “We are all facing so much adversity, even now with the whole George Floyd situation in Minnesota. Of course, the song was written before that, but it still relates to a body of people who are living in a world where we don’t know what’s going to happen next. Even if people forget all the lyrics to the song, I want them to always remember two words: ‘Never alone.’ That’s the most important message.”

Anne-Marie Kommers is from Lake Bluff, Illinois. In September, she will begin a doctoral program in French literature at Northwestern University.