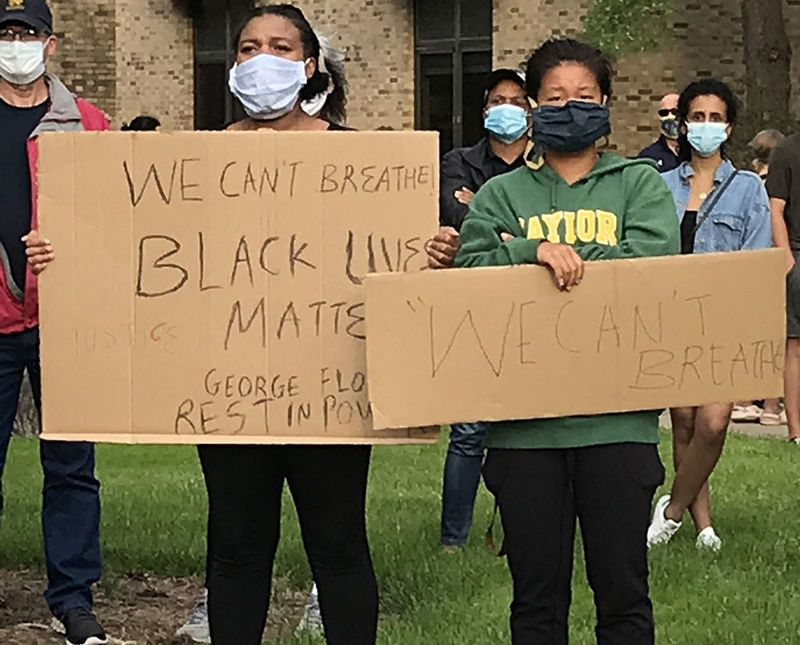 A campus prayer service in the wake of the police killing of George Floyd. Photos by Margaret Fosmoe ’85

On the seventh straight evening of protests across the nation after the death of an African American man in police custody in Minneapolis, members of the Notre Dame community gathered to pray and reflect.

George Floyd died May 25 while handcuffed and being held down by a police officer. Protests of racism and police brutality have spread to dozens of American cities, with many spiraling into widespread violence, arson and looting.

More than 1,000 people gathered Monday evening, June 1, on the Hesburgh Library Quad to join in prayers and listen to speakers. It was the first large gathering at Notre Dame since the campus shut down in mid-March because of the coronavirus pandemic and shifted to online classes. Everyone who attended wore face masks and they were encouraged to practice social distancing. Students, faculty and staff were invited to the gathering, titled “Prayer for Unity, Walk for Justice.”

“We gather tonight to reflect on the death of George Floyd,” said Notre Dame President Rev. John I. Jenkins, CSC, ’76, ’78M.A. “If it were only Mr. Floyd’s death, it would be a great injustice and tragedy. But there are many other deaths to remember,” he said, noting a long list of African Americans who have died unjust deaths.

“We gather tonight to reflect not just on police violence against a single man in Minneapolis, but on a legacy of violence, often conducted with impunity, against black men and women in our nation. We confront the heavy burden of a legacy of racism,” the priest said.

“To black colleagues, students and friends: I am so sorry for the pain you are suffering,” Jenkins said. “We are all responsible for combating the legacy of racism, but its burden falls on you. You no doubt have felt the weight of that burden intensely in the past week.”

In the wake of Floyd’s death, there must be an outcry and advocacy for justice, Jenkins said. “Our outcry, however, must not give way to violence. As welcome as protests have been, the violence, the burning, the shooting will not serve the cause of justice. It will only perpetuate the violence.”Jenkins noted the hard work of dedicated police officers who risk their lives to keep the public safe, saying their work and reputations must not be smeared by the bad actions of a few.

Jenkins urged those present to pray for Floyd and his family, and for their own black colleagues and friends: “Let us pray for an awakening in the hearts of those of us who are white to demand an end to the legacy of racial violence. Let us pray for our nation.”

“Change must be engendered in areas that cannot be televised or spread by social media. It must be engendered in the minds and hearts of individuals,” student Jeff Musema told the crowd. He is president of Wabruda, a campus group that promotes brotherhood among African Americans through discussion.

“We call out to our entire community to join us as we confront the sin of racism,” said Arnel Bulaoro ’94M.A., interim director of Multicultural Student Programs and Services.

After the speakers, those present were given lighted candles, which they carried in a silent procession across campus to the Grotto, where participants one by one placed their votives in the candle holders, then gathered in silent prayer.

A video of the event and the full text of Jenkins’ remarks is available here.

Leaders of Notre Dame student government and other campus organizations earlier in the day issued a Statement on Racial Justice and the Murder of George Floyd, which they are asking others to sign. The statement says, in part: “We appreciate the University’s effort to stand in solidarity with the Black community with the Prayer for Unity, Walk for Justice prayer service, and we encourage students to participate in this event. However, beyond prayer, we have an obligation to take concrete steps toward equality.”

The peaceful campus gathering proceeded on the same evening as a series of extraordinary events in Washington. President Donald J. Trump gave a short address in the White House Rose Garden, vowing to deploy U.S. military troops unless states quickly halt the violent protests that have taken place across the nation. The president’s comments came as tear gas canisters could be heard exploding in the street a block away, where officers from the National Guard and U.S. Park Police in riot gear were shown on live TV pushing back peaceful protesters.

Trump said governors should deploy the National Guard in numbers to “dominate the streets.” If governors fail to do that, the president said, he will mobilize thousands of U.S. soldiers and “quickly solve the problem for them.”

Clashes between police and the public continued overnight and into Tuesday morning in cities across the nation.