Last year, Maria Munoz Robles and her twin sister, Brizzia, shared their story as undocumented students as a way to show the Notre Dame community that immigrants no longer needed to be afraid to embrace their identity. 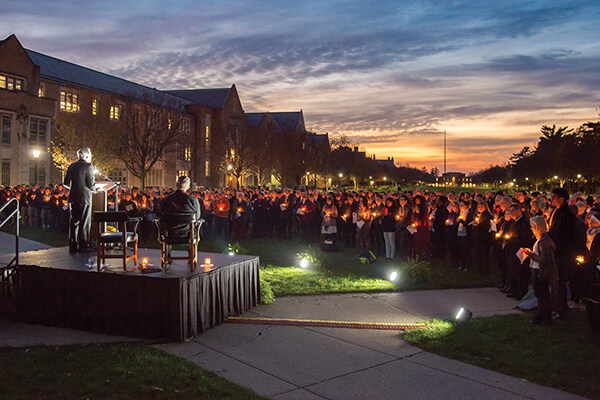 The November presidential election of Donald Trump has reversed that optimism.

Maria, who along with her twin was co-valedictorian of their Nevada high school, said the wave of anti-immigrant sentiment that helped Trump win has stirred up visceral fears: for her family, for her safety, for her continued education as part of the Notre Dame family.

“I know there’s a lot of hatred for us and for immigrants,” Maria said in late November. “But I was devastated to learn that good friends voted for Trump.”

During the campaign, Trump promised to immediately rescind the Deferred Action for Childhood Arrivals (DACA) executive order that temporarily allows more than 700,000 undocumented people like her and her sister — who were brought to the United States as children — to work and study here. Without DACA status, the twins and dozens of other Notre Dame students who agreed to give their family and personal information to the government are at a real risk of deportation.

And when some Notre Dame students mocked a protest rally for undocumented students in front of the Dome, Maria said it felt like a family betrayal on top of the electoral rejection of the U.S. public. With effort, she tried to rationalize the personal feelings of hurt.

“It seems that a lot of people don’t want undocumented people to succeed because it’s seen as taking away from them,” the sophomore said. “I know we’re a scapegoat for anything bad that happens in the economy.”

Trump began his campaign by calling Mexican immigrants criminals and “rapists.” Many people interpreted the election as a referendum on the future identity of the country, which created bitter divisions along racial, religious, economic and cultural grounds. Democrats responded by branding his supporters as racists and xenophobes, stoking further division.

College campuses across the nation became hotbeds for hate-motivated incidents, with one human rights organization documenting nearly 900 occurrences in just 10 days after the election. Some people, especially impetuous youths, seemed to believe Trump’s attacks on political correctness gave them license to say or do clearly inappropriate things.

Events ranged from drawing Nazi graffiti to posting white supremacist posters and leaflets at a half-dozen colleges. A Jewish professor at Oberlin College in Ohio found a note in his front doorway that read “GAS JEWS DIE.” At Missouri’s Lindenwood University, an undocumented student found a “wall” of shoes in her room with a note reading, “Trump won so here’s a little preview of what is to come #wall.” At the University of Michigan, a man threatened to light a Muslim woman on fire unless she removed her hijab. At Trump’s alma mater, the University of Pennsylvania, black freshmen were added to a racist group-message thread that included a “daily lynching” calendar event.

Recognizing this unrest, University President Rev. John I. Jenkins, CSC, held an interfaith prayer service the Monday after the election to pray for peace for the nation, wisdom for leaders and care for the most vulnerable. The service was held outside O’Shaughnessy Hall at the Ivan Mestrovic sculpture of Christ and the Samaritan woman at the well, which provided the Gospel passage and a model for reaching out across cultural divides.

“First, we are committed to respecting the dignity and worth of every human person, from conception to natural death, regardless of national or ethnic group, religious tradition, gender, race, socio-economic class, immigration status, sexual orientation or anything else.

“Second, we are committed to work together to realize what is called the common good — the conditions that allow each member of this community to flourish and contribute to the flourishing of others.

“Third, we are committed to solidarity with all people, recognizing that the well-being of each person — and particularly the most vulnerable and marginalized — is a concern for every one of us.”

Jenkins specifically assured undocumented students that the University “will spare no effort to support you” as part of the Notre Dame family.

But like the rest of the nation, true reconciliation on campus remains an unfinished project.
Patrick Crane, president of the Notre Dame College Republicans, said his group supported Trump despite the reservations of many members over the candidate’s divisive rhetoric. Some other GOP student groups, such as those at Harvard and Princeton universities, withheld their support.

“We slowly unified behind Donald Trump as we came to be ‘Never Hillary,’” Crane, a senior, said. “We’re hopeful that he’ll make the country great again and think he should be given a shot, like President Obama was eight years ago.”

Crane said Trump supporters were disappointed because the prayer service “catered to one side the whole time.” He agreed with supporting the vulnerable but didn’t feel equal recognition for conservatives who “are happy that we have a new direction for our government and country.”
“Calling the election acrimonious was an insult to Trump voters,” Crane said. “I thought the prayer service was a failure because it didn’t bring people together.”

Across the political aisle, others felt the University should declare itself a sanctuary campus. Some faculty members and students circulated a petition asking Jenkins to join a national movement to make all college campuses a sanctuary, which includes not inquiring about or sharing information about immigration status, and barring immigration authorities from school grounds. The petition gathered more than 4,300 signatures. University officials said most of the policies are already in place, regardless of the sanctuary label.

Two days after the November prayer service, about 450 students and faculty rallied for this cause in front of the Main Building. People walked from all over campus to sit in front of the steps, many with signs supporting undocumented students, such as “Education not Deportation.”

Jessica Pedroza, an organizer of the peaceful demonstration, said she wanted to support those who felt attacked during the campaign.

“This was no ordinary election,” she said. “A Trump victory, to a lot of us, meant that we personally or our close family members and friends were going to be directly affected. It seemed like a validation of Trump’s hateful rhetoric — against women, Muslims, immigrants, the disabled.”

Another organizer, Gargi Purohit, is an undocumented student from India whose family moved to the United States after her father died when she was in the third grade. Purohit said the rally’s goal was to clarify what support, such as legal help, the University would provide and also to ask that it become a sanctuary campus, which has more symbolic than legal meaning.

Purohit, a sophomore, said she appreciated Jenkins’ words of support and felt the mostly silent demonstration helped start the conversation about how to achieve the goal. Pedroza, a senior, said while some Notre Dame students had said hurtful things after the election, most seem interested in finding inclusive solutions. She hopes DACA students “can continue to study in a place free from the hateful rhetoric that plagues the rest of the nation.”

But Crane, the Republican, disagreed with the methods of spontaneous protesters immediately after the election. “They started screaming and yelling and blocking traffic on campus and across the country,” he said. “Screaming will only alienate people from your cause.”

Crane said he “would never tell a Notre Dame student to go home, we don’t want you.” However, he said if DACA is rescinded, he would not agree with the idea of disobeying federal orders or breaking the law. “We should respect them as human beings,” he said. “But it’s a delicate balance because we have to respect that the U.S. is a nation of laws.”

While Jenkins did not make any announcements about the sanctuary movement, he did join 435 college and university presidents who signed a statement of support for the DACA program.

“To our country’s leaders we say that DACA should be upheld, continued, and expanded,” the statement reads in part. “This is both a moral imperative and a national necessity. America needs talent — and these students, who have been raised and educated in the United States, are already part of our national community. They represent what is best about America, and as scholars and leaders they are essential to the future.”

Professor Luis Fraga, co-director of the Institute for Latino Studies, said a recognition of the natural desire for change should have indicated how hard it is for either party to win three straight elections. What was different, he said, was the divisiveness of Trump’s rhetoric, which “raises questions about what we’re willing to accept as normal.”

Fraga said the targeting of marginalized groups made some students at Notre Dame and other places feel their place on campus was insecure, but the University response has helped.

“I’m moved by the clarity of Father Jenkins’ statements and how consistent they are with the fundamental Catholic values and positions of Pope Francis to provide all immigrants with human dignity,” Fraga said. “It makes me proud to be a part of the University.”

While the treatment of immigrants and minorities was the major issue reverberating through campus, other students reacted to Trump’s comments about women at a time when campus rape is a national issue. Senior Kristen Kennelly wrote a letter to The Observer about her post-elections feelings as a victim of rape and its harrowing effect on her. She said she was “horrified” that voters didn’t seem to care that Trump’s comments amounted to sexual assault.

“People often wonder why women choose not to report sexual assault,” Kennelly wrote. “However, after Trump’s election, this reason has become abundantly clear: A man can brag about sexually assaulting women and still be elected to our country’s highest office.”

Professor Robert Schmuhl ’70, the former director of Notre Dame’s Gallivan Program in Journalism, Ethics and Democracy, specializes in the intersection of politics and the media. He penned a big-picture reaction. “Every day of the 2016 campaign provided evidence that the American political system is in the throes of a downward spiral that jeopardizes governing following the electoral process. In Washington and elsewhere across the 50 states, it’s becoming more and more difficult to locate a place resembling a center point, where citizens of different political viewpoints can find common ground in approaching problems.”

At the prayer service, Jenkins said a classic Notre Dame story may provide a model for a way forward and for the type of community the campus strives to be. When Rev. Theodore Hesburgh, CSC, was University president, a student left school because two other students harassed him for being Jewish. Hesburgh told the two offenders they had to go convince the Jewish student to return or they would be dismissed themselves. They did, and all three graduated together.

“That is Notre Dame,” Jenkins concluded. “Either we walk together in mutual support, or we do not walk at all. Either we are all Notre Dame, or none of us are.”